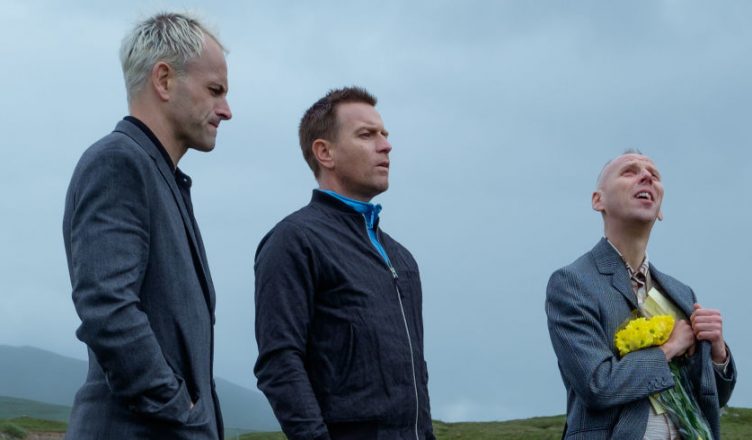 It’s been 20 years since Trainspotting made an impression on people who saw it. The band is back and it feels a lot like nothing has changed, but everything has. What happened to the guys in the past 20 years? How were their lives changed after Renton bailed on them? Will they reconnect after all this time? Well all these questions and more are answered in T2, not Terminator, even though Begbie seems like one.

The plot revolves around Mike Renton (Ewan McGregor) coming back to Scotland after 20 years outside the country. Needless to say, his actions aren’t forgotten, even 20 years later. The reunion with Spud (Ewen Bremner), Sick Boy (Jonny Lee Miller) and Begbie (Robert Carlyle) doesn’t go as smoothly. The men want their part of the money back, while Sick Boy and Renton once again cook up a scheme, this time their are lead by the sultry Veronika (Anjela Nedyalkova). Not only does Veronika become the object of desire for Sick Boy and Renton, but she’s the driving force that moves the plot along. The women from the original (Kelly Macdonald, Shirley Henderson) only make cameos, but a strong female character is needed to stabilize these eccentric male characters.

This movie couldn’t have been made without Danny Boyle at the helm, along with the entire cast returning. They sure look different, but oddly similar. The boyish faces aged and resemble that of men that have been through some shit. Even though the characters have visibly aged, they haven’t necessarily matured much. Those of you hoping for the crazy antics that made the first movie so polarizing, won’t be disappointed.

The humor, partying, drugs, vulgar language is still all here, but T2 seems to have a bit more heart than the first movie. There is this engaging reflection and self-realization that the characters individually go through. The world may have completely changed and passed them by, but finally they are actually realizing that and thinking about making changes. It is in these self-reflections that the film and these damaged men we see on screen get to earn your approval and understanding. There is a deeper rooted reason why they do the things that they do, but you finally get to understand why. At the core they are just men who want to be accepted by society, but the only acceptance they understand is among each other.

Trainspotting was hilarious and T2 doesn’t loose any of that luster, it actually may be even funnier. I also appreciated the less heavy accents, therefore I could actually understand the characters when they talked. Maybe in the past 20 years the only thing these men accomplished was to learned how to leave some of the thick Scottish accents behind? So yes, you can definitely notice the difference and understand more of the talking that goes on in the movie, but it doesn’t take away and keeps the Scottish feel and authenticity that you were introduced to in the first one.

This isn’t a movie for everyone. Some may feel repulsed and turned off my the story and the characters. Just ask my date for the night, she didn’t see the first movie, but probably wouldn’t even consider coming to this one based on how appalled she seemed to be watching. How can you not cringe at Spud puking himself while his head is bagged, pretty nauseating, but that’s part of what Trainspotting is. British films have this innate humor that is sometimes hard to grasp for American audiences. This humor is raw, in-your-face, blunt and honest. There is no holding back and Trainspotting takes that to another level.

I enjoyed T2 Trainspotting. It was nostalgia done the the right way, by honoring the first one, but also is reflective of the world we live in today. Even the characters acknowledge it. The cell phone use, social media play a role in the storyline and how the characters interact, all while the visual surroundings remain fairly unhinged through 20 years. You can actually see this movie without seeing the original. It sort of plays in the way where you can see the films in reverse order and go back to see the original after seeing this one. Credit the brilliance of Danny Boyle, John Hodge and Irvine Welsh for making you invest in these unpleasant rejects—again.