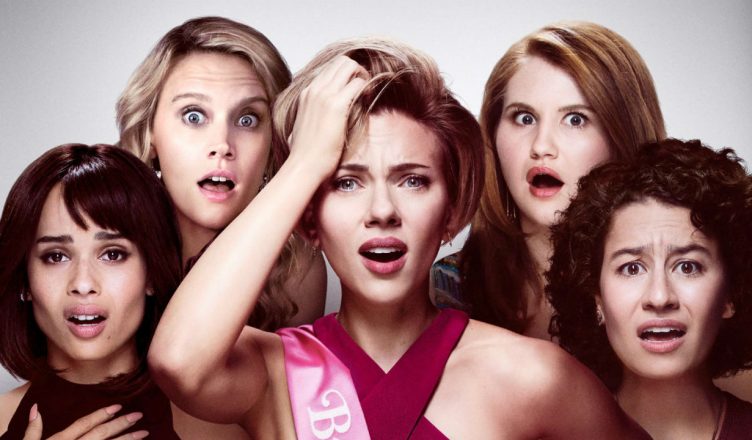 So truth be told. I wasn’t even supposed to see this movie. I was slated to screen 47 Meters Down (couldn’t they just make it feet not meters, geez metric system), but due to the hellacious Chicago weather and traffic I was 20 minutes late to a 90 minute movie, so instead I get the option to see Rough Night. I’ll be honest, I had very low expectations for a movie that seemed to be a Hangover and Bad Moms wannabe love child. It actually wasn’t much of either of those movies, but it was the following.

Ok, so they got me. I actually kinda liked this movie. Initially I questioned the casting. Proven comedic talents of Kate McKinnon and Jillian Bell trying to force a A-lister with no proven comedic talents (Scarlett Johannson), a talented lesser known comedic actress Ilana Glazer and Lenny’s daughter Zöe Kravitz? To my surprise she has a lot more Imdb credits than I expected to see. This is a a somewhat weird and uneven mix of actors, kinda like the Hangover guys were before they became household names. To my surprise they make it work and seem to have solid on-screen chemistry. Whatever Kravtiz did to change up her look (bob haircut?) is working for me, she looks great and her acting has vastly improved since X-Men: First Class.

The ladies make it work and are genuinely funny, but the unsung star of the film that steals the show is Paul W. Downs who plays Peter, the nerdy and wimpy fiancee to Johannson’s character Jess. Downs is hilarious. His mannerisms, expressions, heck, even his voice tone are all on point. The guy is a hidden gem that had most people erupting with laughter in the theater. He’s also credited with co-writing the film. For those that don’t know much about him as I didn’t prior to the movie, he’s a mainstay on Broad City. I hope to see more of him in upcoming films.

So the film isn’t just about a wild bachelorette party, there is an actual plot and specific incident that takes place early in the film that the story is wrapped around. I actually didn’t mind that this was the primary focus, not just some wild party. There are some hilarious scenes that come about due to this incident. One of the best comes at the expense of Kate McKinnon who does some wildly funny things on the beach scene. 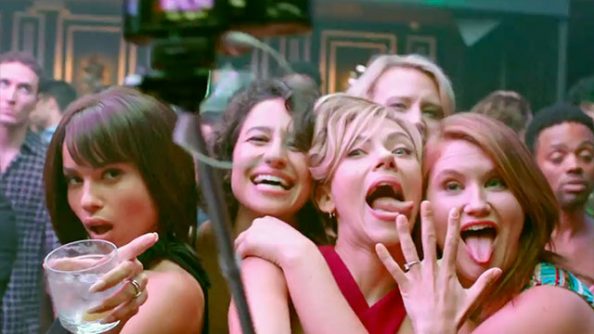 I think the target female audience will enjoy the film. It’s a great girls night out kinda film. Guys can have fun checking this out also. I’d say it would be a solid date movie to go to. The lesser used male characters that include the Peter character and his friends have the funniest scenes in the movie. I like how they played opposite of the stereotype. The males in the movie have their shit together, as opposed to the women exhibiting their flaws. It’s this stereotype role reversal that you don’t get to see too often. I liked that these women were flawed, sexual and imperfect. They felt real and authentic. Non cookie cutter by any means.

The women in the audience, including some men seemed to really get a kick out of the movie, but it didn’t give me the same reaction. I appreciated the comedy and attempt at having a sustainable plot, but the jokes didn’t always come through. It’s funny, but not close to the comedy of top comedies like the Hangover. It wasn’t even as funny as Bad Moms. Bell and McKinnon take up majority of the physical comedy and garner the best one-liners, but their domination of comedy doesn’t help the other actresses that are usually with them in the scenes.

I don’t want to spoil the incident that the movie revolves around, but it’s pretty simplistic and the outcome is predictable. Nice attempt, but little intrigue or suspense. You knew all along how the entire story will eventually play out and how these characters will end up. The one less predictable twist at the end that didn’t have much substance was between Kravitz’ and Glazer’s characters.

If you’re a fan of Broad City, this is a movie right up your alley. If you wanna see a silly movie that will deliver some laughs, this is the right movie. If you’re expecting for something spectacular then you’ll be disappointed. Ideally this is a rental kinda movie, but with the lack of comedies in theaters currently it’s worth checking out. My traffic and weather misstep turned into a more than bearable movie experience. Rough Night ultimately is about friendship and bonds. It is reflective in our everyday lives. We have different friends for different reasons that we like to do different things with and some of them won’t see eye-to-eye with. This film embraces the differences in friendships, even the rough ones.

More on this movie check out my site Reel Talker