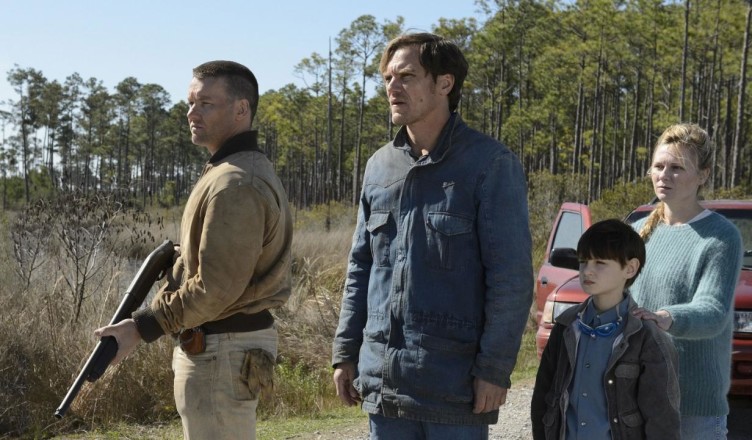 Synopsis: Writer/director Jeff Nichols proves again that he is one of the most compelling storytellers of our time with the sci-fi thriller “Midnight Special.” A provocative, genre-defying film as supernatural as it is intimately human, it follows a father, Roy (Michael Shannon), who goes on the run to protect his young son, Alton (Jaeden Lieberher), a boy with mysterious powers that even Roy himself cannot comprehend. (WB)

Jeff Nichols has really carved out a name for himself when it comes to writing and directing film with a ton of suspense and intrigue in movies such as Take Shelter and Mud. In Midnight Special he delivers on the suspense and intrigue, but falls flat in the final act of the film. The film starts out fast (literally) and mysterious. Two adult males are breaking the law and committing crimes, even going as far as to killing a police officer that’s suspicious of their activities. They are speeding away in a car in the middle of night. In the backseat there is a young boy they are presumably abducting.

On the surface this looks like a kidnapping (it sort of is), but we soon find out that the boy is “special”. The two adult male abductors/criminals are named Roy (Michael Shannon) and Lucas (Joel Edgerton). Roy is revealed as the boys father, while Lucas is a friend and helping aid. When ensues is a race against the clock to get the boy to a certain place, and these men won’t let anything stop them from getting in their way.

The movie is very suspenseful. For two-thirds of it you are trying to put together the semblance of what is going on. The slow but timely reveals of the boys secret powers makes you wonder who he really is. As a matter of fact, you kinda wonder who everyone in this film is. What is their purpose? What’s their endgame? Who are they? Are they aliens or humans? This is the good sort of intrigue that kept me engaged.

There should be no surprise that the power duo of Shannon and Edgerton can carry any movie. These are two elite actors side-by-side carrying the script of a movie that’s purposely obscure. Kirsten Dunst and Adam Driver round out the supporting roles, though Driver plays a questionably inept character (more on that later).

The dark lighting and mood of the movie adds to the uncertainly surrounding the characters. It’s a good and needed setting. Whenever glimpses of the boy’s superpowers are unleashed, they aren’t overdone. The sampling of his sheer unassuming power is chronicled accordingly. He can predict the future. His wrath shakes buildings out of their foundations. I desired to know what his full-fledged capabilities are throughout the film due to build and the sampling that’s sprinkled.

I was pretty surprised how violent that movie was. Lots of cold blooded killings. I sets a serious tone to the movie. In retrospect, the first half is a completely different movie than what the conclusion ends up being. First half is a legitimate thriller, second half is a Sci-Fi much more kid friendly movie.

What the hell was Nichols thinking when it came down to the final act of the film? A mysterious and suspenseful thriller turns into some Disney amateurish Sci-Fi concoction. Potential Spoiler: Now I don’t want to spoil the ending, but I was awaiting to see George Clooney show up and convince me this was a reincarnation Tomorrowland. Just silly and confusing is what the payoff ends up being. It bothered me how a well crafted movie had to submit itself to a nonsensical ending.

The kid kinda looks like he’d be more fitting to be an X-Men. In a way a bit of a kid Cyclops ripoff. The comparisons stop when you see the goggles he wears to protect his vision are much more like pool goggles than anything a X-Men would wear. Back to Driver, who plays a government official that’s charmingly goofy, yet supposedly a top intelligence aid. If he’s supposed to be the brains of central intelligence than this country is in a lot more trouble than we can imagine. Roy and Lucas seem vastly more clever and intelligent than the clown CIA character portrayed by Driver. His character is so thoughtless and wacky that in comparison it makes Kylo Ren look like a better version of Darth Vader. I’ll let you digest that one.

I actually really appreciated and enjoyed the first half of the film. It started to get odd after the midway point as more plot points were getting revealed. As mentioned the ending was just preposterously mindless. While the visuals were solid, especially the ones featuring the boys display of powers, the fact that it all concluded to an eruption of video game fantasy takes it all down several notches. Midnight Special was setting up to be special for the first hour, until it turned into nothing special at the end. Tell me that was an April Fools joke…

One thought on “Review: ‘Midnight Special’ Isn’t So Special”