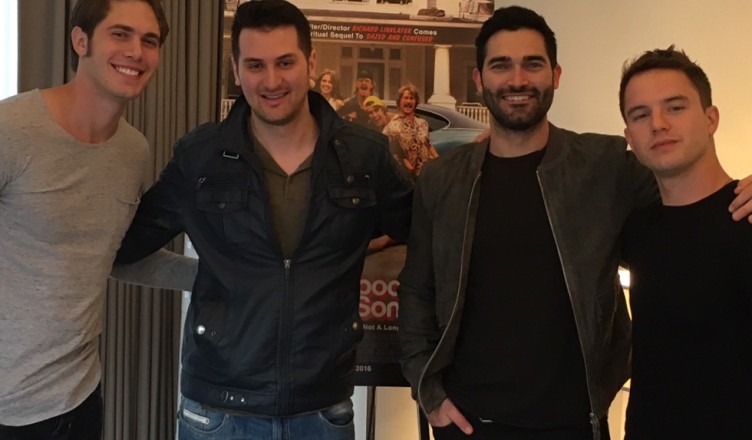 Recently I had had the chance to speak to the cast of the Richard Linklater film Everybody Wants Some, which comes out in theaters nationwide April 1. The stars of the film; Blake Jenner, Tyler Hoechlin, and Will Brittain visited Chicago on their promotional tour of the movie and I had a chance to sit down and talk to them at the Langham Hotel in downtown Chicago. Here is a excerpt from the interview and the full audio can be found below:

BJ: Yeah totally,  I’ve always been curious about college. I actually asked Will about it yesterday, I find it fascinating. Like the hero stories. So being able to have that slice of it for myself, even away from the set it felt like it. Being able to hang out with your roommates, we’d hang out, throw a couple of beer, that camaraderie aspect with your friends was cool to experience. It was definitely a fun time for me.

TH: I didn’t have that kind of college experience (like in the movie), being able to go through college without going to class, or having to study for anything, or actually showing to practice and having to compete. It was a lot of fun. This is what I feel a lot of people I knew in college were doing in college, but I didn’t get to participate.

WB: Unlike you assholes, I did have that college experience and it was great. Instead I was not a baseball player, I was an actor, but it was very similar in a lot of way. In a way I was the Jake of the theater department. This guy coming in thinking he was a stud then realizing all these other people are good at what they do. Being introduced to all these different parties and different looking girls that were all just incredibly hot (laughs).

I had a blast talking to these guys. Definitely the most fun I’ve ever had doing an interview. All three guys were so grounded, you wouldn’t think they were movie starts. Blake was a bit more quiet and very polite (he was probably tired also), Tyler just radiates with energy, and Will was just such a real dude. It’s one of those interviews that felt that you’re talking to your longtime buddies. We are all in the same age group so it was easy to relate and just let loose and just talk. It will go down as one of those interviews I will always cherish looking back on. Ryan Guzman was originally slated to join, but wasn’t available due to a scheduling conflict. It would have been cool to have Ryan there also. The feeling I got was that these guys truly enjoyed working and hanging out together, and it shows on-screen as it does off-screen.