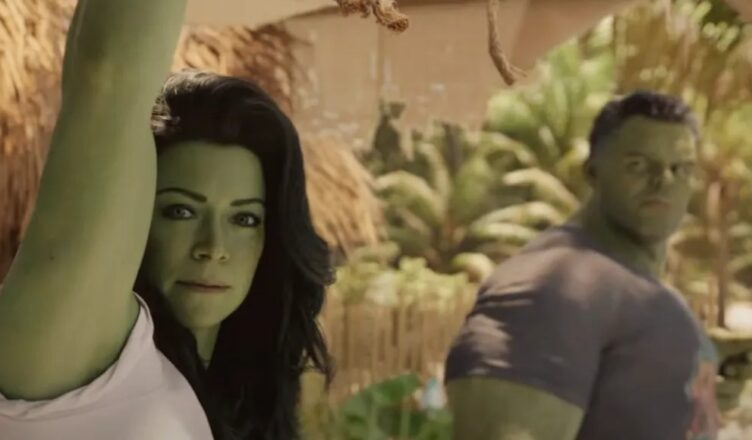 A new clip released from She-Hulk: Attorney At Law hints at a major connection to Hulk and his stint on Sakaar during Thor: Ragnarok. She-Hulk: Attorney At Law is set to premiere on Disney Plus on August 18th and features Tatiana Maslany, Mark Ruffalo, Tim Roth, Benedict Wong, and Jameela Jamil. The series will follow Jennifer Walters (Tatiana Maslany) as she navigates her life as a lawyer and as a green 6-foot-7-inch superpowered Hulk.

With She-Hulk: Attorney At Law less than a week away from release, Marvel is in full-on press mode for the series. New trailers, clips, and photos are released daily and fans are eating it up. The latest full-length trailer featured everyone’s favorite Hell’s Kitchen-based vigilante, Daredevil, and that’s only the tip of the iceberg. The trailer showed fans Abomination in all his glory and the Sorcerer Supreme, Wong. It also showed She-Hulk breaking the fourth wall and a whole bunch of other interesting tidbits. Everything we’ve seen from the series so far looks great and with less than a week left until the premiere, we’re bound to see more of what the show has to offer.

In a new clip released on IMDB, She-Hulk: Attorney At Law hints at a major connection to Thor: Ragnarok. The clip begins with Jennifer Walters and Bruce Banner having a discussion about Captain America’s virginity. Things take a turn for the worse when a spaceship, which looks a lot like the Grandmaster’s ship, the Commodore, drops down and causes them to crash their car. This tease not only connects Thor: Ragnarok to She-Hulk: Attorney At Law, it also hints at possible future plot lines involving the Hulk. Rumors have been spreading around the internet that Hulk’s son Skaar is set to make an appearance somewhere down the line. Could this be the Hulk’s past come back to haunt him? We’ll have to wait until the show premieres to find out, but it does seem like Sakaar may not be quite done with the Hulk yet. You can see the full clip and screenshots from the clip below:

We're 1 week away from the premiere of #SheHulk on @DisneyPlus, and this exclusive clip just made us rethink everything we knew about #CaptainAmerica… 👀 #TatianaMaslany @MarkRuffalo https://t.co/LPqhmqIj7h pic.twitter.com/tHQYXh3rkA

That’s one of the Grandmasters spaceships #SheHulk !!! pic.twitter.com/w8Bqd1iNmR

Marvel has a purpose for every easter egg they place. I have no doubt that this ship was chosen for a reason and that reason will become clear once the show premieres. In the meantime, the rumors surrounding Skaar are interesting, but the timeline doesn’t quite at up. If Hulk had a son he would be very young. Probably around seven to ten years old. All we know right now is that the ship looks like the Grandmasters. It could be from any planet. Maybe this ship model is the Honda Civics of spaceships. We just don’t know. One thing is for certain, based on the new clip I am 100% on board with She-Hulk: Attorney At Law. The series looks like a lot of fun and I can’t wait to see how it connects to the larger MCU. You can catch She-Hulk: Attorney At Law when it premieres on Disney Plus on August 18th, 2022.

Series Synopsis: Jennifer Walters navigates the complicated life of a single, 30-something attorney who also happens to be a green 6-foot-7-inch superpowered Hulk.