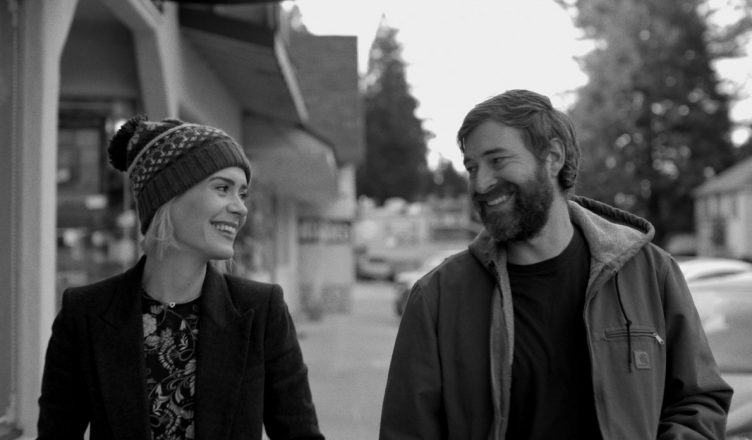 Blue Jay (2016) is an independent film, directed by Alex Lehmann. The script is written by Mark Duplass, who also plays the main lead. The film was shot in a span of just seven days. It was released on October 11, 2016.

The story follows two high school lovebirds, Jim and Amanda, who meet after years at a supermarket. After a series of awkward exchanges, they decide to spend the rest of the day together, reminiscing and having fun.

The opening sequence hooked me from the very beginning. The mesmerising shot of the trees created a hypnotic effect, which I really enjoyed.

The plot of this film is very simple, and it only features two characters throughout the whole film. This is the story of Jim and Amanda, and they are the only two people (other than Waynie) visible on the screen. Due to this, Blue Jay reminded me quite a bit of the Before Sunrise trilogy, but that’s where the similarities end.

The conversations between Jim and Amanda were so candid that it always felt like their meeting was taking place in real life, instead of being shot on camera. The contrasts in their personalities were very much visible. While Jim was the easy-going and a very emotional man, Amanda was more collected and responsible.

Sarah Paulson has never failed to amaze, and her diverse roles are a proof of that. Her portrayal of Amanda was spot on. The facial transitions from awkward to laughing to sad to nostalgic, I was in awe of her performance.

There were many memorable scenes in this film; however, the one which touched me the most was the living room dance on Annie Lenox’s No More “I Love You’s”.
This scene was the perfect mix of intimacy and nostalgia. The close up shots of the camera only added to its beauty. At one point, I almost felt like I was intruding on the couple’s private moment. 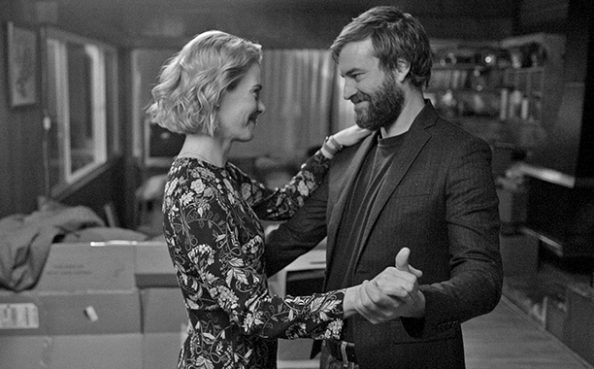 The concept of black and white cinematography is still widely unused in contemporary cinema. Blue Jay is shot in a monochromatic colour scheme, mainly to put emphasis on the theme of nostalgia and the poignant plot. While I admire the bold move, it felt a bit out-of-place in the setting of the film.
Malcom & Marie is one of the best examples of monochrome cinematography in modern cinema, along with Schindler’s List and Frances Ha.

The main mystery surrounding the couple from the beginning is, why did they break up in the first place?
The characters reveal the reason why they’re no longer together towards the end of the film, ensuing drama to stir between them once again. I think that keeping their reason for break up a secret from the audience would have added more depth to the plot and made it even more memorable.

Blue Jay is a very short and quick watch (just 80 minutes), but it stays with you for a long time. The film is very bittersweet, and if you are anything like Jim, it’ll surely leave you in tears.