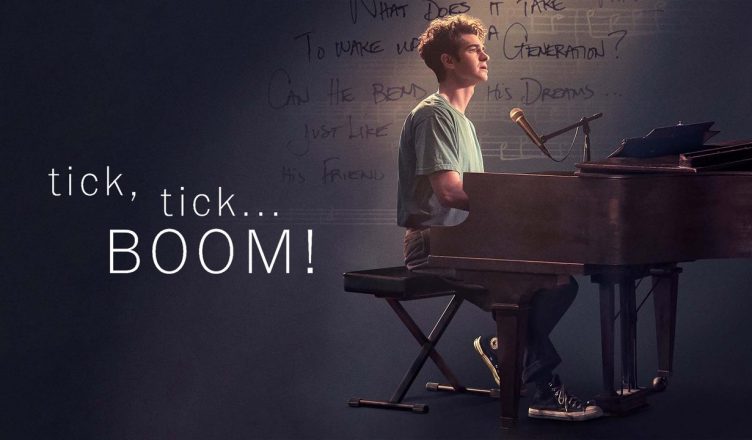 tick, tick…BOOM! is a 2021 biographical musical drama directed by Broadway sensation, Lin-Manuel Miranda. The film is a semi-autobiographical story about Jonathan Larson—a lyricist and composer—and is based on an eponymous musical by him. The film stars Andrew Garfield, Robin de Jesús, Alexandra Shipp, Joshua Henry, Judith Light, and Vanessa Hudgens.

Jonathan Larson performs his stage musical—tick, tick…BOOM!—in New York. He explains a ticking noise he hears in his head, keeping him aware that time is running out. In the musical, he starts his story when he is working in a diner in SoHo. He is about to turn 30 and is currently working on his dystopian sci-fi musical, Superbia. Jonathan feels a lot of pressure in life, mainly due to his inability to achieve success which has started affecting his personal life too. 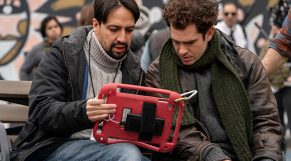 When I started watching this musical drama, it was solely due to Lin-Manuel Miranda’s direction and Andrew Garfield as the main lead. I was not familiar with Jonathan Larson’s name, until after I finished watching tick, tick…BOOM!. After watching this film, I came to realise how influential Larson’s work had been, and that he truly was one of a kind. I feel that tick, tick…BOOM! perfectly did justice to the late composer and lyricist.

Film after film, Andrew Garfield has proven himself to be an exceptional actor. tick, tick…BOOM! was no different. Andrew as Jonathan Larson, gave an extremely inspiring performance. I could feel Larson’s emotional turmoil through the actor’s expressions and body language. Much like Larson himself, Andrew Garfield played the role of the lyricist in a dejected yet goofy manner.

While all the songs in the musical drama were written by the original Jonathan Larson, the way they were presented on-screen took my breath away!
In the song “Sunday“, Garfield dances in his diner while delivering food orders. There are a few special cameos from various Broadway actors in this song, such as Bernadette Peters, Chita Rivera, Joel Grey, Phylicia Rashad, Brian Stokes Mitchell, André De Shields, Howard McGillin, Chuck Cooper, Bebe Neuwirth, and Beth Malone. Hamilton actors Renée Elise Goldsberry and Phillipa Soo, along with the director—Lin-Manuel Miranda—himself made appearances in the song. We also saw original cast members of “Rent” (written by Jonathan Larson)—Adam Pascal, Daphne Rubin-Vega, and Wilson Jermaine Heredia.

My personal favourite was “Therapy“, which was performed by Andrew Garfield and Vanessa Hudgens. The song focused on the relationship troubles of Jonathan Larson. It was playful and realistic. Both Garfield and Hudgens acted out the song perfectly and kept my eyes glued to the screen. 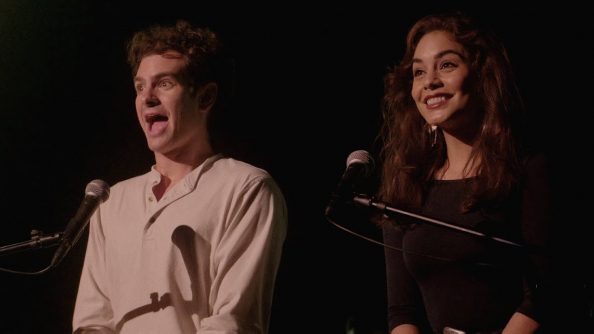 The mastermind, Lin-Manuel Miranda, wisely put out Easter eggs for all Broadway fans out there. Other than the amazing list of cameos in this film, there are many minute details which only people who love the musicals will be able to point out. While the role of late Stephen Sondheim has been played by Bradley Whitford onscreen, the scene in the film where Sondheim sends a voicemail to Larson was actually recorded by Sondheim himself!

Throughout the film, my eyes were glued to the screen, waiting to learn more about Jonathan Larson and his life. In my opinion, I don’t think there was anything that could have been done differently.

The film truly was an homage to the late Jonathan Larson, a legendary lyricist and composer who was gone too soon from this world. The almost two-hour long film is extremely passionate and a must-watch for anyone who is a fan of musicals or theatre!