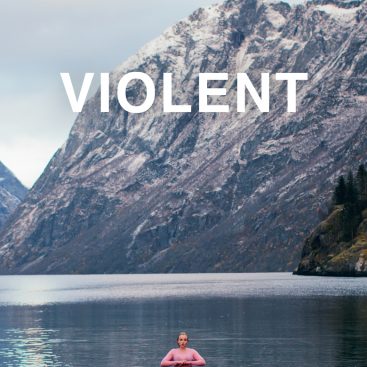 A young Norwegian woman, and her last memories of the five people who loved her most, recalled while experiencing a catastrophic event.

Was the beginning her end?

Was this ending her beginning?

Was everything in between her life?

Or the here that flashes before the hereafter?

These mysteries and a myriad more will consume you when embarking upon the eerie and ethereal epoch presented in the 2014 surrealistic Norwegian drama “Violent”.

This is a complex story. Equal part dream-like reality. And real-life dreamscape.

Dagny (Dagny Backer Johnsen in a turn perhaps best described as mesmerizing) is a young woman not unlike others her age. She is a loner. Her life lacks focus. She is headed no place in particular. And is in no hurry to get there.

Mother Nature looms all about Dagny. Blending with the supernatural, she is ominous. Conspiring. Cryptic.

What is her end game?

There is a scene mid-movie where Dagny and her sister friend, Astrid, shout from a mountaintop a barrage of nonsense insults and obscenities aimed at the people of Bergen below. It is cute. And it is pivotal. It is Dagny exorcising pent-up inhibitions, letting her pretty blonde hair down and unleashing with unbridled glee spontaneously silly admonishments like “FUCKING WASHING MACHINE!!” and “ASS PUBES IN THE FACE OF A GOBLIN!!”.

When you’ve likely never uttered a vile word in your life, one supposes these are the first phrases that leap to mind when, at long last, you do.

It is a subtle, yet, on it’s own terms, “violent” departure from relentless repression.

Yet, in the grand scheme of human existence, essential.

This story is, for the most part, not very eventful. By intent. We witness moments in time. Of living. Working. Carrying on. Being.

Still, you get this lurking feeling that it’s all building to something. Something bigger. Toward a revelation grander than the mostly mundane machinations the majority of us take for granted every single day.

Near the end of “Violent”, late at night, gazing up at the heavens, Dagny tells a young man this:

“Being alone is quite okay.”

A singular notion either you embrace. Or you don’t.

We watch here as a parade of people come and go during the film. Like signposts along a seemingly meandering path. And each time Dagny leaves she bids each of them “Good-bye”.

Until we meet once more.

But, as with most with whom we engage on this earth, it is much more liable to be not ever again.

“Violent” is available to rent and watch on amazon Prime Video. It is highly recommended.

This is a complex story. Equal part dream-like reality. And real-life dreamscape.