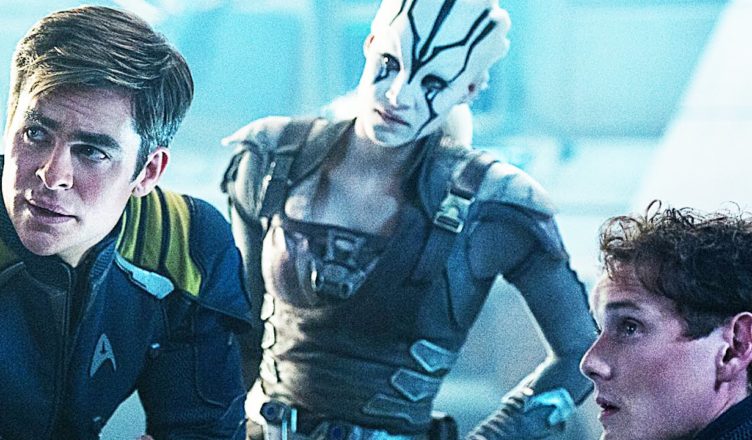 Synopsis: The crew of the USS Enterprise faces one of their toughest challenges yet, navigating a foreign planet and an evil new villain.

I must preface that there wasn’t much buzz surrounding Star Trek Beyond. I’d get flooded with promotional emails, but no one was taking about it leading up to the release. Add to that a late Wednesday night screening, where critics are supposed to be getting ready for bed. No J.J. Abrams. Doomsday right? Wrong! Star Trek Beyond is easily the best of the film trilogy.

This time around, the Federation is facing their toughest task. The USS Enterprise is attacked and destroyed leaving the crew spread out on another planet. Captain James T. Kirk (Chris Pine) is battling odds trying to save his lost crew and navigate the mysterious planet. His task is to find his crew, defeated the enemy and get the hell out of there and back to Earth.

The entire cast is back for the third installment of the franchise. It’s important to keep continuity with a cast that mixes and matches well together. Chris Pine really owns the role of Jim Kirk (not the Illinois congressman). He’s charming, authoritative, goofy and flawed as Kirk. Spock (Zachary Quinto) has really come along nicely in the films. In Beyond he’s as emotionally available as you’ll see Spock be. I liked the fact that while he doesn’t get a ton of screen time, he makes most of with a purpose and some strong character choices that bring up his feelings. The best of the bunch might be Doctor McCoy (Karl Urban). They really give him a lot to say and do, he’s easily the best deadpan comedic relief in the movie.

There is no denying whose movie this is–Chris Pine. He’s the centerpiece, rightfully so, that all the Star Trek movie plots revolve around. What’s different about Beyond is that it feels a lot more of an ensemble movie, and a lot more truer to the television series. Right from the opening when the iconic Star Trek music comes and the “Space, the final frontier” words are uttered, you just get a sense this will feel a lot more like the television series.

Justin Lin of Fast & Furious fame, takes over the directors seat from Abrams. He does a fantastic job with the movie. The film has some great shots, such as the slow destruction of the Enterprise, to name one of the many. While Star Trek was made to be a summer blockbuster movie, they never felt honest or particularly true to what’s made it a phenomenon–the relationships among the crew. The movie still has it’s fair share of blowups and noises, but a lot more subtler where they aren’t the focus of the film.

I really enjoyed how the characters were separated and forced to partner up. Kirk was with Chekov (R.I.P Anton Yelchin). Spock and McCoy (great pairing). Scotty (Simon Pegg) with Jaylah (newcomer Sophia Boutella). Lieutenant Uhura (Zoe Saldana) and Sulu (John Cho) get captured by the villain Krall (Idris Elba). Elba plays a subtle but very imposing villain. His reveal is even more suspenseful, including an intriguing backstory of the character. Best Star Trek villain of the trilogy. All the characters working their way separately by using their skills to get out of trouble. Felt a lot more intimate than having them all bunched together.

Casual fans that will see the film, might have some trouble following the plot and characters. There is frequent mention of Ambassador Spock (Leonard Nemoy), but for those that haven’t seen the previous films or are aware of the role Nemoy plays in the franchise might not get the crucial meaning and message being sent in the movie. It’s as if the filmmakers expect you to have at least a basic understanding of Star Trek. If you do, there are some nice Easter eggs.

Star Trek Beyond surpasses its film predecessors. It’s funny, with solid dialogue,  good script, very good visual effects, nice character interaction and focus, with just enough action. The cast is looks very comfortable in their roles and work great together. The tragic loss of Anton Yelchin shouldn’t be omitted when talking about the movie. He really is an intricate part of Beyond and is featured nicely. He played the character the right way in all the films, his loss will be missed if future films. The throwbacks to the original show are a nice nod of paying homage to the original actors and story.

Abrams might have left to take over Star Wars, but Justin Lin has a great grasp of it. The fact that Simon Pegg is one of the main writers gives insight that he gets the pulse of the franchise and understands how to project it on-screen and off. For some reason the movie managed to fly under the radar, but not anymore, Star Trek is just beginning their voyage into a new frontier.