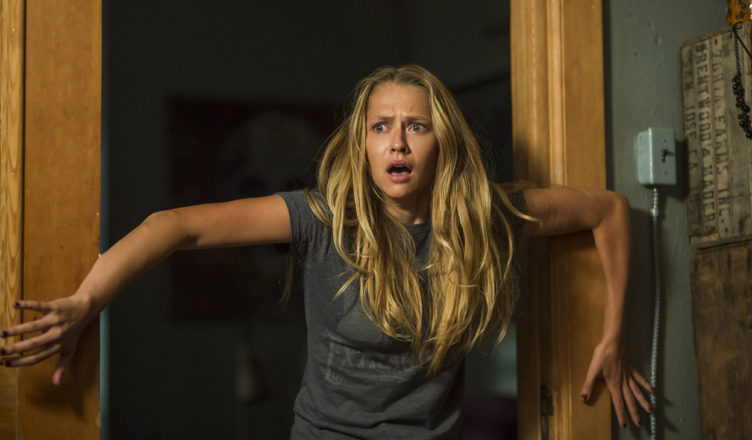 Synopsis: A family is being torn apart by a ghost named Diana that comes out when the lights go off.

As many of you know, anything with Teresa Palmer is a must-see for me. She’s easily my top three celebrity crush and good news for Palmer lovers is that she’s had a busy year on-screen in 2016. Light’s Out combines the masterful eye of James Wan (producer) and Palmer. This can’t go wrong, but does it? Of course not.

Rebecca (Palmer) has isolated herself from her family. She’s sort of a gothic-punk rock-preppy mix persona. Her mother Sophie (Maria Bello) is losing her mind and appears to be talking to a ghost (she is actually), which is putting her son Martin (Rebecca’s younger brother) at risk to stay at home. Rebecca must come back and face her fears of the past in order to save Martin from their mother and the ghost who likes to appear with the…lights out.

Teresa Palmer! So she’s plenty good in every way. There is a lot to like about this film. The premise of the movie is one of those that can easily fall into destruction. A crazy person, a spirit and some flickering lights. Luckily it doesn’t give into any cheap straight-to-DVD D-list cliches. This is James Wan after all, with David F. Sandburg directing, who is the creator of the short film this movie is based on.

The scares are suspenseful and genuine. The tension is evident. The deceptive camera work teases and builds up key moments. It’s really nicely executed. For a film that centers on darkness, the lighting is outstanding. The red, purple, blue light color shades and palettes work very well with the story and definitely set a tone and mood.

The casting is good. Maria Bello looks like she could be Palmers mother in real life, not to mention being able to land an actress of Bello’s caliber is a win-win. Gabriel Bateman (no relation to Jason Bateman) might as well be a mini Jason Bateman because he delivers a very nice performance and is very likable. I don’t need to touch on Palmer, because it’s painly obvious to see my affection for her.

I mentioned the avoidance of cliches, one that stands out is how smart the characters operate in their world. So while Rebecca runs into the basement with Martin, they are aware this isn’t the right move to make. The characters are “smart”. Rebecca’s boyfriend Bret (Alexander DiPersia) plays a key role in the film, and he’s one of the smartest characters. When confronted by the spirit (named Diana) he does all sorts of on-the-fly quick decisions to counter the light fearing ghost. In one scene he’s about to face his death and decided to use his car key to turn on the alarm so the lights start flashing, in turn fending off the spirit. Basically the film is very aware of the horror movie stereotypes and acts against them.

At first the backstory of the evil spirit ghost is hazy, but the discovery along the way is what gives the film a much needed boost. It’s a well thought out backstory that validates and explains why the mother is going crazy. Once again, this could have been an easy trap to fall into and not explained, instead just throw a random haunting spirit.

If you’re looking for real scares and horror this isn’t exactly the right movie for those. It’s not the kinda movie that will keep you up late at night. There are some jolting moments, but it’s much more of a supernatural thriller than a horror movie. For horror purists, this doesn’t check all the boxes. There is no gore or blood, however, there are a few moments that are pretty intense.

Lights Out is entertaining and thrilling. It has all the s’ that you need: supernatural, smart, suspenseful and semi-scary. You can trust anything that James Wan is involved in. The story is tightly wrapped up and executed precisely. The movie is just over 80 minutes, but seems like an ideal runtime. The trailers didn’t look as promising as the movie ended up turning out, it’s sort of flying under-the-radar, but it should be considered among the better supernatural thrillers of the year. Not quite The Conjuring 2, but not too far behind.

**I assure that my film critiquing integrity was not compromised by the free flashlight Lights Out key chains that were handed out at the screening.