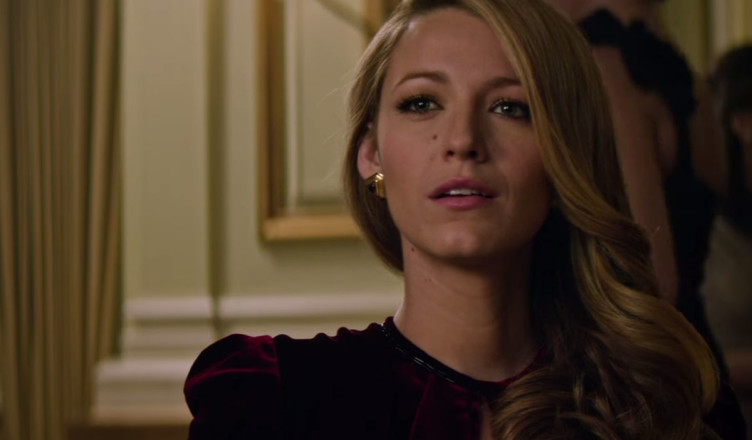 Synopsis A young woman, born at the turn of the 20th century, is rendered ageless after an accident. After many solitary years, she meets a man who complicates the eternal life she has settled into.

When it comes to romance on-screen, The Age of Adeline (available now on Blu-ray & DVD) is timeless. Granted, the main character never ages, but this romance will keep you hopeful and nostalgic. Director Lee Toland Krieger showcases a flawless array of nostalgic charm in The Age of Adeline.

Some might think of The Age of Adeline as a female spin on Benjamin Button–it’s not. Blake Lively plays Adeline Bowman. Right from the start of the movie, there is something sneaky about Adeline. Aside from the fact that her wardrobe looks vastly outdated also, she arrives at some teenagers place to pick up a fake ID he’s made for her. Definitely something is not normal with this women. Next, we see Adeline crank up an old film projector and watches some vintage footage of early 1900’s San Francisco. A narrator introduces the viewer to the story of Adeline Bowman, she lived a normal live in the early 1900’s, married, has a daughter, appears happy.

A rare San Francisco snow event rails her car off the side of a cliff, straight into a river/lake where she is hit by lightning as she’s drowning. I know, the odds of all that happening are pretty magical. The narrator provides a scientifically confusing explanation of what is happening to Adeline. Apparently the voiceover narrator has some Nostradamus-like skills, as he predicts this outrageously complex medical miracle will be discovered in 2035 (everyone hold your breath, we have 20 more years to go until this discovery). Adeline is brought back from the dead due to the force of the lighting bolt. It is revealed that this incident prevents Adeline from ever aging, she’s forever in her mid 20’s. That sounds like fairly appealing (only if you look like Blake Lively).

Adeline Bowman is visibly unhappy with her life. She’s constantly fleeing to different places. Changing her identity, avoiding romantic connections, until she stumbles across Ellis, played by Michael Huisman. A somewhat disheveled looking bearded man who can’t seem to stop pursuing her insistently. He’s charmingly pesky. One of those guys where you can’t quite figure if he’s just overly romantic or a borderline stalker. Either way, Adeline eventually gives into his persistent pursuit. A fabulous romance blossoms between them. A major twist occurs past the midway point of the film that threatens to expose Adeline’s true identity while also bringing up her past.

This film is a throwback in many ways. It’s really refreshing to watch a film that doesn’t have any drugs, violence, or sex in it. The sex is implied, but not actually shown. It shows that you can still make a quality movie without having to use all these elements that have become a standard in films. The focus is on what it should be–romance. In fact it’s the best romantic film of the year. The sort you want to take your girlfriend or date on to see in a drive-in, or cuddle up next to on the couch.

Blake Lively was the perfect casting choice to play Adeline Bowman. Not only is she gorgeous, she has the old Hollywood look. She is just breathtaking in every sense, ageless (no pun intended), someone who transcends eras with her appearance. I was skeptical with the casting of Michael Huisman as Ellis. Huisman has been mostly known for his work on The Game of Thrones. A solid actor, but doesn’t have that pretty boy, nor manly look. He’s kinda just a thin guy with a scrawny beard that looks a bit disheveled. For whatever reason it ended up working in this film, as he has real nice chemistry with Lively. Harrison Ford gives on of his better performances in recent years. He’s grounded, and authentic. A pleasant surprise.

The movie looks fantastic. The scenery of San Francisco is top-notch. The flashbacks scenes of old San Francisco are equally beautiful. Credit to Cinematographer David Lazenberg for providing these grand visuals, and incorporating the night and dusk into the characters story. Costume Designer Angus Strathie is just as impressive with making Adeline fit in today’s society event though her clothing choices are very vintage and elegant. The color and tones in the film are very impressive. Just looks like a period piece meshed in modern day.

The Blu-ray contains several features. A Love Story f0r the Ages is a 30 minute featurette about the making and inception of the movie. Style Throughout the Ages is an 18 min feature about the visual style with the cast and filmmakers discussing the script and how it parlayed into the visual in the movie. Discovering Young Harrison Ford is 8 minutes about the decision to have Harrison Ford in the movie, and Anthony Ingruber casting as the younger version of William. Deleted Scenes is a 4 plus minute feature of two deleted scenes from the movie. Additionally, there is Audio Commentary with Director Lee Toland Krieger.

I loved The Age of Adeline. Sure, it’s not a perfect movie. There are some noticeable plot line holes, that make the movie appear overly fantastical at times. The beauty and what made me connect with the movie was this idea of someone never aging. It will most definitely make you think how you would handle this gift that’s really a curse had you been presented with it? I know I did. Sure looking like Blake Lively in her 20’s for the rest of your live sure doesn’t sound bad, but the struggle with living without having a life as Ford’s character Williams says to Adeline in the movie, is something to really grasp on. I enjoyed the dialogue in the movie. Amid the certain cliche one-liners there are some really meaningful ones. “It’s not just the same when there is no growing old together, without that love is, it’s just heartbreak,” is what Adeline says to her elderly daughter asks her if she misses having someone to love. It’s moments like those in the movie that made me connect and feel things and reflect on my own feelings and the thought of love. I believe that most watching this movie, if they allow themselves to be engrossed will feel something, or have a memory of their past or current loves. Age of Adeline isn’t just some chick flick, or a fantasy filled romance, it’s beautiful and emotionally satisfactory. I can’t help but love Adeline. It’s one of the best romantic movies to come out in a while. I know what I’ll be seeing over again next time I am on a meaningful date.

2 thoughts on “The Age of Adeline Spactacularly Defies Time”