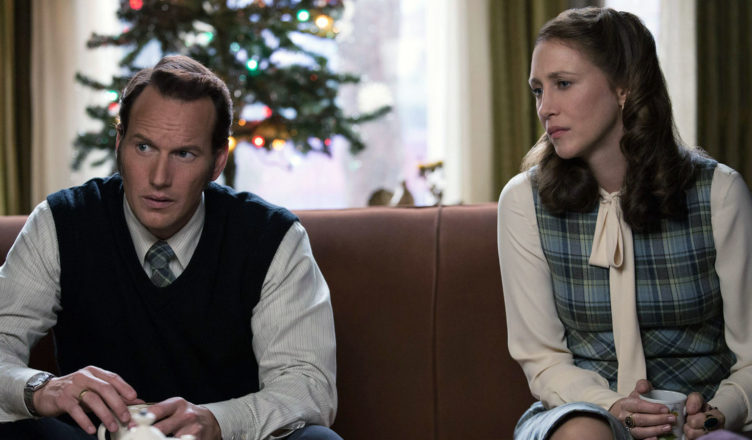 Synopsis: Paranormal investigators Ed and Lorraine Warren go to Enfield, England to stop one of their most evil cases.

It’s fairly definitive (at least in my mind) that there hasn’t been a better horror movie since “The Conjuring” came out in 2013. The first two Insidious films came close, but now “The Conjuring” has just been surpassed by “The Conjuring 2”. Rarely do sequels triumph the original. In this case, the original Conjuring established itself as the top horror in recent years. Time to acknowledge director James Wan as the new modern master of horror. I’m talking about having the potential to be on the same level as John Carpenter and Wes Craven. Wan returned for the sequel of “The Conjuring” and most importantly brought back the stellar duo of Patrick Wilson and Vera Farmiga.

In “The Conjuring 2” Ed (Wilson) and Lorraine (Farmiga) Warren are tasked with a new paranormal case. This time their case takes them to Enfield, England. A single mother raising four children are in desperate need of help as their home is being taken over by a vicious demonic force.

There is a lot to love about this film. Not only does Wan recreate the fell and style of the first one, but a compelling and chilling plot takes it to another level. There are genuine creepy and scary moments in the film. Wan has mastered the art of teasing the audience. What he does so well is that he does is flip the formula used in horror movies. When the music turns up, the background noise goes silent and you think something is about to happen–it doesn’t. However, when you’re sitting comfortable and not expecting anything to happen, that’s when Wan surprises you with a scary moment. That forces to viewer to be on the edge at all times. I love it.

I can’t imagine a better duo to play Ed and Lorraine Warren than Patrick Wilson and Vera Farmiga. They are so believable as an on-screen couple. They calm demeanor dealing with such freaky occurrences is what makes them so interesting. Every time I see them on-screen I am that much more interested in finding out about the real Warren’s. That’s a credit to their acting work and portrayal of the real couple. Farmiga’s Lorraine is the glue of the plot, but in Conjuring 2, Wilson is featured a lot more heavily. his character is sort of stepping up and shouldering the burden. He’s sort of the hero of the film. It’s a nice development to his character. Madison Wolfe, who plays the possessed girl Janet Hodgson is terrific in the film. She looks like a sweet girl, then she scares the crap out of you when she’s possessed.

Stylistically, the film is similar to the first one. That’s a good thing. The dark bleak look of the film molds nicely with a suburban and peaceful look of Enfield. “Conjuring 2” takes place in 1977, and the film looks exactly like it would take place during that time frame. The costumes and set designs are spot-on. One of the more underrated elements of the Conjuring films is the music. I’m not even talking about the sounds, because those are as good as it gets. The actual musical soundtrack is pretty neat. Just like in the first one, there are some popular songs from the 70’s sprinkled throughout the film.

This is an all-around great film. The only negative I can find without nitpicking is the backstory of the demon wasn’t revealed. I would have liked to know why why exactly it is haunting the family, and what happened to it to make it so evil. The focus is on the scares that the demon provides, but not much about it and who it really is. The plot manages to still hold up without that info, but it would help. Also, the Warren’s daughter gets a bit of a paranormal scare that she experiences, but makes you wonder why don’t the evil forces target her when her parents are out of town? I mean she’s living in a house full of possessed objects in the basement.

“Conjuring 2” is a major success. Wan is really on track to establishing himself as a master of suspense and genuine horror. He throws in some Easter eggs in the movie, so pay attention. A major reveal is included midway through the film. The shots look terrific, almost every scene has something at stake, even if it doesn’t, Wan projects the feeling on something major happening. It’s that tease that keeps you on the edge-of -your-seat.

I’m not one to get afraid or spooked by horror films, but I swear I was looking around that night when walking from the theater. I also had a night full of nightmares–thanks James Wan. I sure hope they make a third one. There are enough paranormal cases that the Warren’s have been a part of. Amityville comes to mind as a logical one to use for the next film. This franchise is establishing as one of the best in horror. As long as Wan is directing and Wilson and Farmiga stick around, Conjuring will be the new standard for horror films to live up to. This is a must-see horror film. In a year that’s weak on horror, Conjuring 2 is sure to provide enough scares for the rest of the year.

You can reach me also at: [email protected]

One thought on “Review: “The Conjuring 2” Is Chilling and Perfectly Crafted”