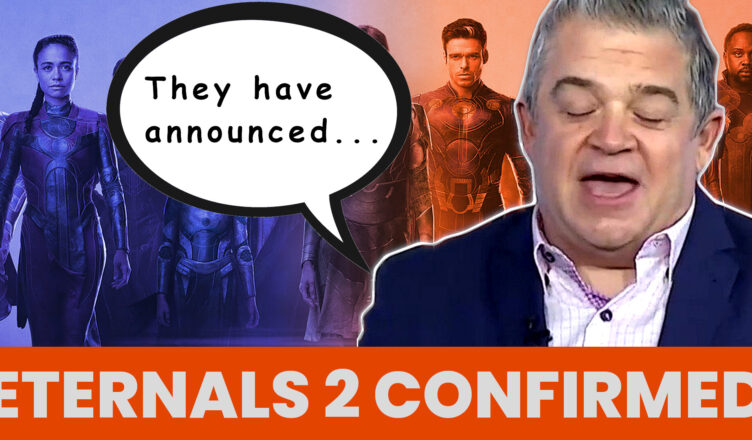 Chloe Zhao directed the first film, which for all its flaws told quite a beautiful story. Fans were kinder than critics giving it a 78% on Rotten Tomatoes, but they failed to show their support at the box office. The Eternals grossed $402.1 million worldwide and was the second-worst performing movie in Marvel Studios’ 14-year history. Despite the poor reception and poor showing at the box office fans still want a sequel. Marvel is being tight-lipped regarding any news surrounding an Eternals 2. Thanks to a recent comment by Patton Oswalt, it appears a sequel is in the works.

In an interview with  The Today Show, Patton Oswalt shared that Eternals 2 is in the works and will be directed by Chloe Zhao. It’s worth noting that Oswalt is set to star in Eternals 2, but he does not speak on behalf of Marvel. No official announcement has been made regarding the sequel, but if Oswalt is to be believed it’s happening and sooner than we thought. He claims that Marvel has already announced the film is happening, despite the fact that they haven’t in any official capacity. His comment also dispels rumors that Taika Waititi will direct Eternals 2. You can see Oswalt’s full quote below:

“They have announced there’s going to be an Eternals sequel. Chloé Zhao is going to direct it.”

Eternals was lackluster at best. The film was slow and dreary, but it did have quite a bit of heart. It was the story of a family having to reunite under dire circumstances to face something together that they couldn’t face alone. I know that’s a bit reductive, but at its core, that is what the film was about. The first film also set up a sequel with an end-credits stinger that introduced Eros aka Starfox (Harry Stiles) and Pip (Patton Oswalt). The sequel will likely continue the story as well as resolve the movie’s semi-cliff hanger ending. I will say, it’s hard to get excited about Eternals 2, but the sequel was basically inevitable. Marvel was going to make a follow-up regardless of poor box office returns. The Eternals are part of a larger universe and their story must continue for the sake of that universe. Even when MCU movies fail, the characters are slated to return regardless. Hopefully, Eternals 2 will improve upon the property and give the heroes the movie they deserve. You can catch Eternals streaming on Disney Plus now.

Eternals Synopsis: The saga of the Eternals, a race of immortal beings who lived on Earth and shaped its history and civilizations.