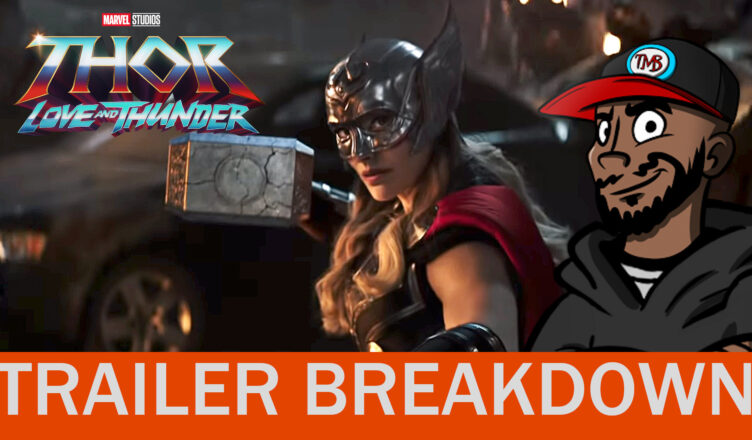 I like this little easter egg and it certainly makes for some cool visuals to see that the MCU is continuing their hot streak with their ability to do comics-accurate costumes.

Thor is then seen at that point working out and getting back into fighting shape. if you notice he’s also wearing a hat that reads as “The Strongest Avengers” which is a nice call back to the running joke from Thor Ragnarok between Thor and Hulk where they went back and forth on which of them was actually “The Strongest Avenger”

Next, we pan out and see Thor is actually using the chains wrapped around some giant creatures’ skeleton as his personal gym equipment. I have no idea which creature this is that’s chained or what it should represent. This could be the skeleton of a frost giant but the head seems a little big for that.

Guys, I don’t know what this creature is!

Next, we see the guardians of the galaxy in the trailer. we see Star-Lord’s new costume which is decked out and regal looking. I forget if Star-Lord is king when we left off with him but this could be an adaptation of when Peter Quill was called to rule his own sector of space in Brian Michael Bendis’ run of the Guardians of the Galaxy comic.

Thor is seemingly showing off his new physique to his guardians’ teammates after his workout. THor also seems to be disinterested in the battle and adventures and looks to be ready to live a quiet life saying his superhero days are over and we see the Guardians’ ship fly away and leave Thor and Korg to go their separate way.

Zeus and the City of Gods

We then get a brief look at who appears to be Russel Crowe’s portrayal of the god Zeus. Now this place is either the home of the Greek Gods known as Olympus OR this is possibly the realm of the gods known as Omnipotence City. Omnipotence city is a somewhat recent creation from Mighty Thor creator Jason Aaron so this COULD be the same place. We then see Korg and Thor giving each other a high-5 so this could be from their satisfaction in finding another realm of gods.

we get another look at this city. it looks beautiful and somewhat Kirby-ish but, to me, it looks like the designs straight from Russel Daughterman’s designs from his Thor run.

The money shot of Mjolnir flying into the scene and being wielded by the Mighty Thor herself Jane Foster.

I have to admit this has me all sorts of excited. I love Jason Aaron’s story from the Thor comics and I love how Marvel is exploiting.. err.. adapting the recent work of their writers to make these movies.

Anyway, that’s all I have for this one. As usual, if you guys like the