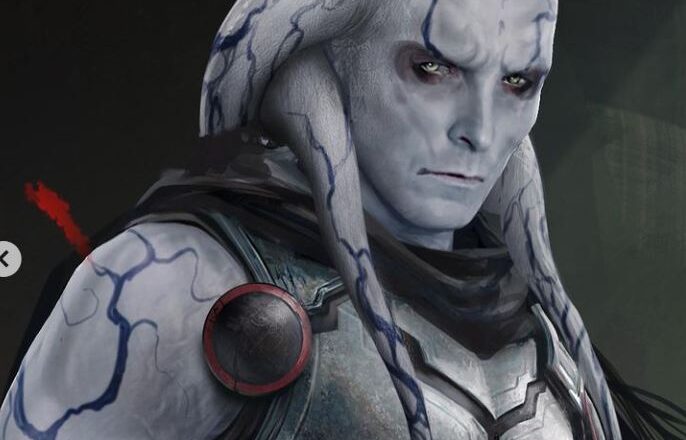 Thor: Love and Thunder introduced fans to a new villain, Gorr The Godbutcher. The character was raised on a planet of immense scarcity and was taught to worship the gods. After the death of his daughter, Gorr wandered his world until he can across the very Gods he worshipped. The Gods rebuked Gorr, who then stumbled across a powerful weapon known as the Necrosword. The sword was created to kill Gods, and Gorr put it to good use, killing the same Gods he used to worship. He then made a vow to kill all Gods, which eventually put him on a path to collide with Thor.

Early concept art posted by Aleksi Briclot on Instagram, shows us a very different look of Gorr The Godbutcher. His look in the concept art is more accurate to the comic books and also makes Gorr appear far more alien. The black and white color scheme is the same but the costume is much more elaborate. Brillcot describes the costume as being like ancient greek armor and also explains what changes there are from the comics. You can see the full Instagram post below:

Concept art from comic book movies is usually underwhelming at best. Sure, there are some cool designs every once and a while, but there is usually a reason they go with the costume they use in the movie. This concept art is one of those rare exceptions. Gorr looks absolutely awesome. From the alien look to the body armor, it just looks badass. Given what Gorr looked like in the film, I can’t believe they didn’t go with this design. That’s not saying Gorr looked bad in the movie, because he looked terrifying, but this concept art is exceptional. The design of his head really gives him a menacing look. It’s a similar design to the twi’leks from Star Wars. The armor also gives him a more battle-ready feel. I don’t know how well this early concept art costume would have transferred on to film, but I sure would have loved to see it.  You can catch Thor: Love and Thunder in theaters now.

Film Synopsis: Thor embarks on a journey unlike anything he’s ever faced — a quest for inner peace. However, his retirement gets interrupted by Gorr the God Butcher, a galactic killer who seeks the extinction of the gods. To combat the threat, Thor enlists the help of King Valkyrie, Korg and ex-girlfriend Jane Foster, who — to his surprise — inexplicably wields his magical hammer. Together, they set out on a harrowing cosmic adventure to uncover the mystery of the God Butcher’s vengeance.