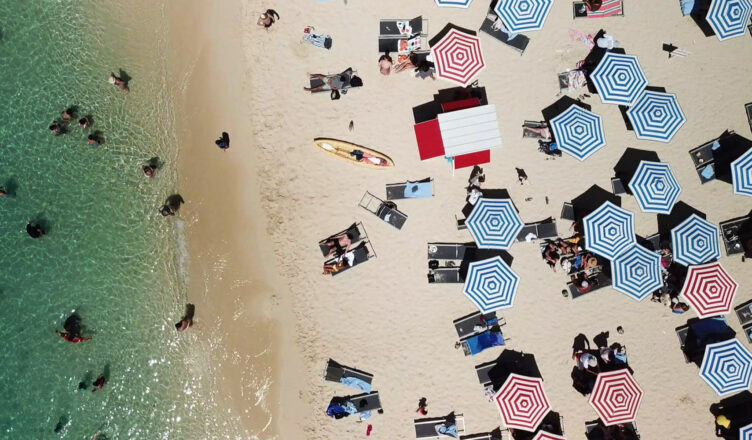 Synopsis of The Last Tourist

The documentary, which was awarded with the ‘Special Jury Prize for Social Impact’ by the Canadian Documentary Jury at the Calgary International Film Festival, examines the history of modern tourism and offers a critique on its current state of affairs. It explores important issues including animals suffering for entertainment, orphaned children exploited for profit, and developing economies strained under the massive weight of foreign-owned hotel chains. We meet local heroes who are leveraging tourism to preserve cultural heritage, sustain wildlife, and support the social and economic wellbeing of communities. THE LAST TOURIST empowers audiences with knowledge and inspiration to make a positive impact and fundamentally change the way we travel.

The Last Tourist will premiere at Santa Barbara International Film Festival on March 8th and will be released digitally by Utopia on March 15th.

The start of The Last Tourist shows us some familiar scenes: romps on beaches under a golden sun; hundreds of heads bobbing above crystal clear water; and people indulging in tiki drinks and buffets. But then we’re hit with the darker aftermath of those festivities: mounds of plastic cups and other debris piled on the sand and getting lapped up by the ocean.

The film wastes no time in showing us the damage caused by hedonistic travel; the luxurious type of tourism that became popular at the end of the cold war with the opening of borders.

One of the central arguments of the film is that the self-centeredness of modern tourism leads to disconnect between the traveler and place. Anyone who’s ever seen a tourist try to take a selfie with a bear is aware of this disconnect.

And speaking of selfies, the film points out that status is also an important motivator for tourists, with 29% of millennial travelers saying they wouldn’t even go to certain locations unless they could post about it on social media. This further worsens the divide between the tourist and the location and results in an industry that caters to tourist and disadvantages locals.

It’s a subject that speaks to all of us in some way, since most of us have been tourists at some point in our lives, so it’s easy to get on the defensive. But the film holds back from being preachy and instead assumes we will care if we’re aware of the problem.

Some of the scenes of elephant shows in Thailand are difficult to watch as they involve intense animal cruelty. But while they’re difficult to watch, they’re also honest rather than exploitive. Jane Goodall provides commentary at this part of the film, telling us that these modes of entertainment would not happen if people didn’t pay for it.

There are many tear-jerking moments in the film, but it’s not all doom and gloom. There is an innovative solution offered for how we can transform tourism and encourage a kind of traveling that involves respect and education.

At an hour and 40 minutes, the film runs a bit long and may be harder to digest for more impatient viewers. The long length is partly because the film covers a lot of ground with the subject of tourism, but also because the pace of many of the scenes are deliberately slow.

The natural landscapes and practices of the locals are slowed down to encourage mindfulness and show us how to slow down and see the world through the eyes of other cultures. It’s an effective way to convey the message, but there are some who may be used to the lightning speed of social media and lose patience.

A Film That Challenges us to Look Inward

Anyone who’s ever taken a cruise, or dreamed of taking a cruise to the Bahamas, or longed to ride an elephant in India, or wanted to go on safari is part of the audience for this film. It asks us to reconsider the way we travel and align our experience abroad with the value systems we have at home.

It isn’t easy, because it’s asking us to overcome that bit of selfishness we feel we’ve earned when we can finally take time off work. The time we want to spend letting loose and having no cares in the world is supposed to be tempered in favor of a more conscientious experience.

It may be tempting to say that The Last Tourist exaggerates the problem and just get on with the fun, but if you allow yourself to be taken on this journey, you may end up pausing before hitting “add to cart” for the next cruise ticket.