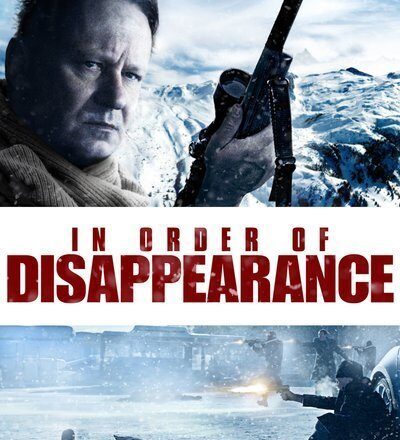 Nils ploughs snow in the wild winter mountains of Norway, and is recently awarded “Citizen of the Year” by the people of his small town. When his son is murdered for something he did not do, Nils wants revenge. And justice. His actions ignite a war between the vegan smoothie swilling gangster “The Count” and Serbian mafia boss “Papa”. Winning a blood feud isn’t easy, especially not in a welfare state. But Nils has two things in particular going for him: Heavy machinery and beginner’s luck.

Ruthless drug lords, beheadings and semi-automatic weapons war between gangland goons. Not exactly your common recipe for inspiring laughter and levity now, is it? But somehow such insidious ingredients blend together to do just that in the pitch black humor-saturated 2014 Norwegian crime dramedy “In Order of Disappearance” (original Norwegian title: “Kraftidioten”).

After his son is force-fed a fatal drug overdose by a pair of low-life henchmen, small town “Citizen of The Year” Nils Dickman (veteran Swedish actor Stellan Skarsgård in a somber yet simmering turn) transforms into a one-man army, bent on reaping righteous revenge and retribution in the name of his dearly departed and beloved boy.

Along the ensuing and winding path of pathological and malicious mayhem we are treated (for lack of a better word) to blood-spattered cardboard 4-count coffee holders, an ill-fated Japanese hitman carelessly (callously?) nicknamed “The Chinaman”, cinema’s perhaps first-ever killer snow-blower rig (can you think of another?), a persistent bespectacled recruiter tirelessly headhunting on behalf of Norwegian liberal leadership and an utterly unhinged cocaine trafficking kingpin cum “family man” (in strictly the loosest sense of this role and as gifted to us by a perfectly cast Pål Sverre Hagen) who discharges his pistols in the direction of those with whom he is displeased as nonchalantly as most people peel a banana.

Special recognition of technical merit must be invested on behalf of two considerably creative camps here. First, to the exquisite atmospheric music soundtrack playing throughout and under Director Hans Petter Moland’s expertly executed film. The talented trio of Brian Batz, Kaspar Kaae and Kåre Vestrheim are collectively masterful in establishing a singularly tuneful tone to the production. Depending upon what the particular moment may call for, their auditory brilliance summons within strong senses of starkness, melancholy and even lunacy, primarily by way of affecting string instrument performances, not the least of which is this achingly moving acoustic guitar work.

Well earned recognition in equal measure goes to chief cinematographer Philip Øgaard, as well. It is his keen eye that captures the beauty and, at once, the desolation of this remote, unforgiving region of Norway. Øgaard’s artistic vision succeeds in such a poignant manner as to make this ruggedly spectacular landscape play like another character in this most unusual and multi-layered story.

What this all adds up to is two endlessly engaging hours of a nonstop, no holds barred and unabashedly politically incorrect free-for-all of cutthroat crime, dark comedy and, ultimately, good triumphing over evil via the ingenious orchestration of evil doing in itself.

In closing, I offer these two final thoughts on “In Order of Disappearance”.

This final disappearing act “flies in the face” of anything you’ve ever seen before.

There is a line mid-movie delivered by one of these cleverly conjured characters, courtesy of Kim Fupz Aakeson, who based his wildly imaginative screenplay on a story authored by Finn Gjerdrum.

“What kind of people are they?”, the hulking thug asks, contempt unfiltered.

Deal with it, kompis.

“In Order of Disappearance” is available to both rent and buy on amazon Prime.

Deal with it, kompis.