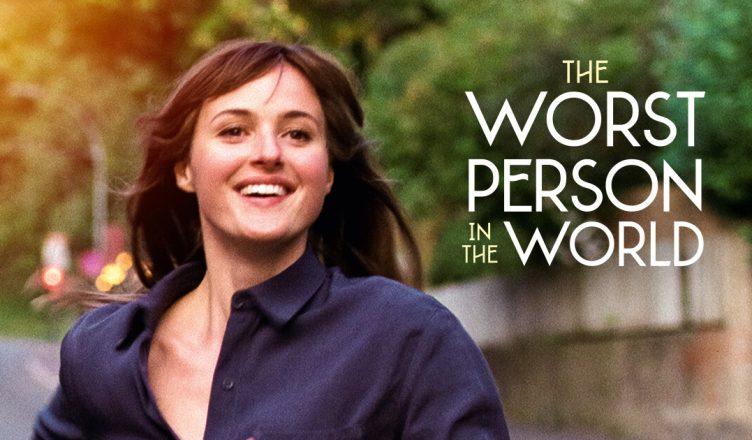 “The Worst Person in The World” is a modern dramedy about the quest for love and meaning in contemporary Oslo, Norway. It chronicles four years in the life of Julie (Renate Reinsve), a young woman who navigates the troubled waters of her love life and struggles to find her career path, leading her to take a realistic look at who she really is.

I had not seen a movie in a theater in a year and a half. Thanks again, C-19.

So it was a most welcome moment indeed this past weekend at The Grand Cinema in Tacoma, Washington. It was there that finally, and at long last, I once again plopped my patootie on that customary cushioned push-down seat in preparation of eyeballing the much-ballyhooed and Oscar-nominated Norwegian film “The Worst Person in the World”. Good news on two fronts: The silver screen has not lost it’s luminous luster. And the movie projected onto it on this milestone afternoon was well worth the price of admission (and the mega-missed micro-brews and popcorn, to boot).

This is a masterpiece in filmmaking. An insta-classic. A benchmark standard to which all future romantic dramas will be compared.

Yes. It is that damn good.

Renate Reinsve staggers as Julie, a young woman struggling to navigate her life’s path as she wrestles relentlessly with getting a grip on who she is, and not what the world has mandated she should be. We watch as she transforms before our eyes, both spiritually as well as physically. We meet Julie as a wide-eyed, almost innocent sprite on the precipice of turning 30. Over the next four years an emotional, often volatile, roller coaster ride sees her change, including a face which has become reflective of a world-weary soul. This is a girl all growed-up now, able to articulate opinions, feelings and pent-up anger she was incapable of expressing in a previous incarnation. It is a stunning transformation, equal parts amusing, jarring, heart-breaking and, ultimately, inspiring.

When a contentious TV interview scene in “The Worst Person in the World” erupts into blunt and ugly discourse, art is raucously revealed as what it is supposed to be. To wit, not uniformly clear-cut, patently perceived nor unanimously socially acceptable. Rather, to create is, by inherent design, to challenge, to push us out of our zoned-out zones of comfort. Moreover, to cause us to reflect, reconsider and…gasp…to actually think.

What these final moments of “The Worst Person in the World” may or may not signify is ultimately and entirely up to you to determine on your own. I intended to share my thoughts here. I’ve decided that would be unfair to those who have yet to experience this magically captivating and uniquely brilliant story of one human being’s search for purpose, enlightenment and contentment.

So I’ll conclude with one request.

Hell, call it a plea.

Don’t ever, ever, allow others to determine who you are.

To do this is to ignore, to willingly reject, that which makes you special. Remarkable. Wonderful.

For denial of one’s true self is, for all-time, among the absolute worst things in our world.

“The Worst Person in the World” (2021): Coming to terms with Yourself

“The Worst Person in the World” (2021): Coming to terms with Yourself

This is a masterpiece in filmmaking. An insta-classic. A benchmark standard to which all future romantic dramas will be compared.