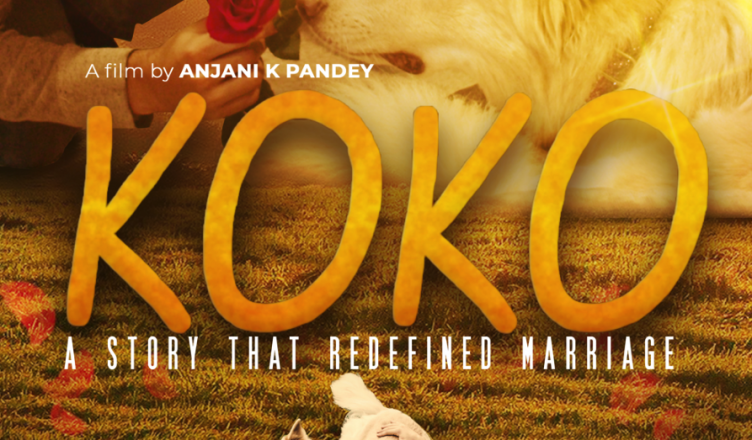 Last September I reviewed a film in search of a home, “Koko”, and interviewed Writer/Director Anjani Pandey.  Since then the movie, the complex story of a man who wants to wed his dog, has found both a distributor and subsequent viewing platforms.  Before reading my update interview with Pandey, I suggest gaining some perspective regarding the film’s peculiar premise at this link to my original review on TMB,

“Koko” (2020): What is it to be Wed? Filmmaker Anjani Pandey offers his Thoughts | The Movie Blog

Since we last talked in September “Koko” has toured extensively on the festival circuit and is now available on both amazon Prime and Tubi-TV.  Share with us your experience as a filmmaker over these last several months as you worked to bring your movie to a wider audience.

At the same time finding the right distributor for “Koko” was another challenge, and finally we signed a worldwide distribution contract with Indie Rights based in Los Angeles.

“Koko” released in February (of this year) on amazon Prime. We received very good response with 4.6/5.0 star ratings with over 100 reviews within 30 days of release, which is rare for any indie film.

You made some updates and revisions to “Koko” from the original version of the film.  What are these changes?

Yes. We did a few changes based on feedback we received before we released the film. Most of them are fixing bugs with sound and color corrections. There are no changes in the story as such. You can say it’s now more smooth and more polished.

I am going to naturally assume that, based upon the inherent sensitive subject matter, “Koko” met with a degree of opposition and controversy from segments of it’s audience.  How did you deal with this?  Was the message of your story altered to any significant degree?

“Koko” is (a film with) romance, comedy and drama. The story is unusual, thought-provoking fiction. It can be interpreted in many ways, depending upon the audience’s own perceptions.

Before the film released there was a degree of opposition and controversy raised from one segment of the audience. Some people, without watching the film and just based upon tagline & synopsis, tried to label the film as anti-LGBTQ.  Whereas, the fact is “Koko” in one way helps in protecting marriage equality by pointing out a loophole in the law. The tone of “Koko”‘s story is satirical, not meant for repealing, but to fix the loophole and raise awareness so that no “Randy” should get confused or any “Mike” should try to skirt the law.  And that’s the core premise of the “Koko” story.

Just like any other satire, “Koko” is (made) for open-minded audiences to understand the real meaning. Otherwise, it is easy to get misunderstood. So when “Koko” got released, I asked everyone to watch the full film without being prejudiced, so there was no need to alter the story.

Do you still intend to make “statement films” moving forward if so inspired as an artist?

Yes. Of course I will be making more films with unusual stories. One may call it “statement film”, but definitely it will be entertaining and fun watching the film for sure! For instance I am working on my next project with the working title “Proof of Concept”, which is kind of a meta-film.

“Koko” is (a film with) romance, comedy and drama. The story is unusual, thought-provoking fiction. It can be interpreted in many ways, depending upon the audience’s own perceptions.