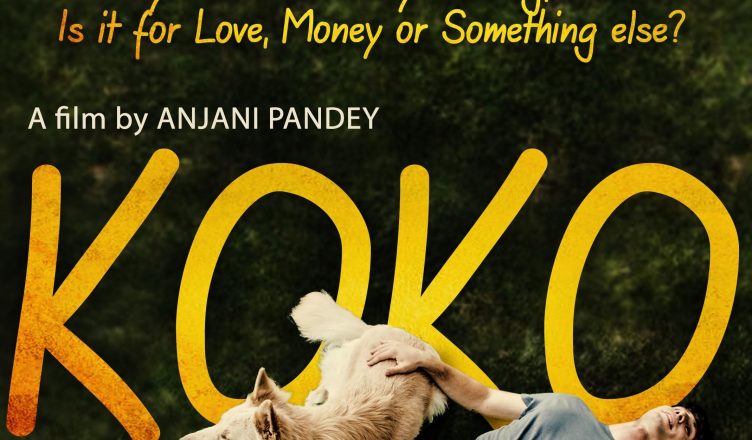 The new drama “Koko” is not for everybody.  Open to seriously entertaining the notion of human and animal marriage?

The main character is a quiet, thoughtful man surviving devastating loss and heartbreak in his young life.  Anthony Esposito does an admirable job here in a uniquely challenging role as Randy, a desperate loner seeking with all his might a living being he can rely on.  To always be there for him.  Through thick and thin.  And never leave.  For Randy, his soul mate is identified in the movie’s title.  It’s his dog.

Unlikely concept?  Sure.  Unimaginable?  For most, yeah.

“You can’t understand someone until you’ve walked a mile in their shoes.”

This axiom resonates in “Koko”.  And it seems to be among the ideas director Anjani Pandey is asking that we consider.

I talked with the filmmaker to gain perspective.

“Koko” is not your standard love story.  Man wants to wed dog.  What inspired you to make this film?

My inspiration and Randy’s inspiration are the same.  I am not personally (a) supporter (of) the same-sex marriage law, and when I heard same-sex marriage (had) been declared as a legal act (through) the News/(President) Obama Speech, I was not happy.  So I thought (that) when (a) man is legally allowed to (marry) another man, when a woman is legally allowed to (be) married (to) another woman, then one day (in the future) someone can ask (to make it ) legal to marry his/her dog, too, which is TOTALLY unnatural and unacceptable by anyone including me.  We can’t even imagine that kind of society we will be living in.

So I got an idea to write a story for my next film which is (kind of a) warning (like showing a mirror) to the same-sex marriage supporters that by allowing same-sex marriage they open the door (to) possibilities of marriage between Human and Animal, too.  “Koko”‘s story may be fake, but in the future Randy could be a real person who can demand to have legal rights to marry his dog Koko.

Do you personally believe that any two living souls should be granted legally recognized marriage?

“Koko” would appear to be a union of the Hollywood and Bollywood motion picture business universes.  Please share how this apparent international partnership came to be.

The production company for “Koko” is Nukkad-USA Productions, which has (an) association with Hollywood and Bollywood filmmaker(s)/cast/crew.  “Koko” is purely (a) Hollywood project, 100 percent made in Florida with locations, actors (and) crew all from (the) Tampa Bay area.  This particular project has no international partnership but (the) film will be released worldwide.

Pandey says “Koko” is currently touring the film festival circuit in search of a distributor and is already generating interest on the road to wide release.

"Koko" (2020): What is it to be Wed? Filmmaker Anjani Pandey offers his Thoughts

"Koko" (2020): What is it to be Wed? Filmmaker Anjani Pandey offers his Thoughts

The new drama “Koko” is not for everybody.  Open to seriously entertaining the notion of human and animal marriage?