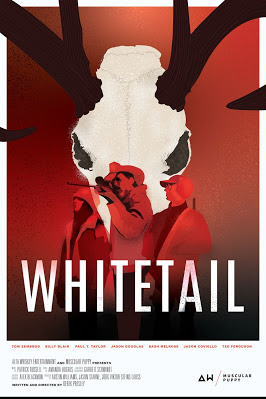 Evil has infected a vast and forested remote Texas ranch.  Into this crucible enter a father, son and uncle.

What follows is terrifying.

Thus is the sinister and multi-layered parable presented us in the new domestic crime thriller “Whitetail”.

I spoke with writer/director Derek Presley.

Having grown up in, and lived and traveled throughout, Texas, it is of particular personal interest that “Whitetail” is shot in the north central region of the state.  How did this unique choice of location come to be?

There’s a couple of different reasons why. Mostly, it’s because the story originated from my past when I’d go hunting at my family’s farm out near Coleman, Texas. The farm was this really flat and dusty stretch of property. I believe it was a few hundred acres, but I was younger so it may as well have been thousands to me. I wanted to shoot the film at the exact location but my family sold the property a few years back. So Austin Williams (producer/upm) had this perfect piece of land that he’d actually shot a few films on. The land was very similar to what I wrote about and off we went. The other reason was that the core group of filmmakers consisting of Jason Starne, Garrett Schwindt and Austin Williams, all lived within an hour or so and we could get to it much easier than what I had originally planned.

Masculinity, and the ofttimes fragility of such, is investigated on a number of levels in this story.  Share your thoughts on this prominent and complex theme running through “Whitetail”.

Well, it’s really the nucleus of the whole film. There were two characters in the film that were entirely based on one person in my life from my past. That person quite literally had two different personalities and both of them, while vastly contrasting, were overly masculine. I think there’s so much of it going on in the story where there’s only men doing men things and behaving like children. The only one with any sense is the one person who has yet to reach real “manhood”. My cinematographer/producer, Garrett Schwindt, told me he believed the whole film was a moral cautionary tale about toxic masculinity. I think he’s right.

As a Christian, it is especially heartening to see the faith, and, more specifically, The Bible, being presented with both dignity and thoughtfulness.  I watch and review a lot of movies.  This is enormously rare in the secular film industry.  Your thoughts?

That’s interesting that you’ve seen it that way. Some people have said it’s a secular story and some have thought it was non-secular. There’s no direct message from me to anyone about religion in the film. What that was, was to show how this man wouldn’t back down and wouldn’t give up on seeing the good in someone, even if it didn’t turn out the best for him. But at the same time, it was also a way to show that there is pure evil in this world and evil can do a lot of damage, despite the good.

One interpretation of the final moments of “Whitetail” is that we are bearing witness to a “right of passage” between father and son.  It is a most uncommon legacy, one that involves unflinching focus and the will to claim life.  As both writer and director of the film, does this approach the intent of enduring impression?

Partially, absolutely. Hunting is something that is almost ritualistic in deep Texas. Father and son go and bond that way. Not everyone enjoys it. I most certainly won’t take my son hunting to bond. Not because I think one way or another about the act of it, but mostly because I just don’t find it appealing. There’s a bit about innocence because Donnie can’t bring himself to take the animal’s life and at the end that’s all he’s really thinking his father would be mad at him about. So that “rite of passage” was kind of never executed, at least on the surface.

I’d say more than anything it’s about the innocence of the son and the guilt of the father. Innocence prevailed…kind of….

Where does your creative muse take you and your audience next, Derek?

“Red Stone” is the film we shot after “Whitetail”. Production was in June of 2020, pretty much right after people were coming out of lockdown from Covid. That is a southern crime thriller taking place over the course of one day in a small Texas town. “Boon” was shot this past January in Washington state up in the mountains and it’s a Neo-Western filled with snow and the bitter cold.

“Whitetail” opens in select theaters on July 21, and becomes available on home entertainment this fall.

Evil has infected a vast and forested remote Texas ranch.  Into this crucible enter a father, son and uncle.

What follows is terrifying.