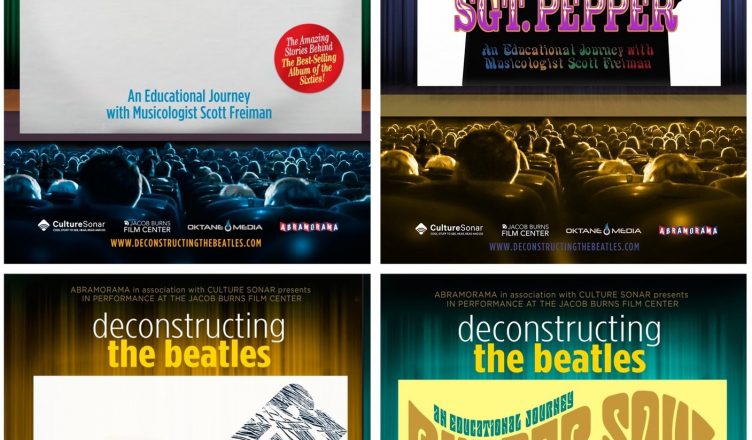 Perhaps there are bigger fans of The Beatles than me. But I guarantee there exists no bigger devotee than grand master “Beatleologist” Scott Freiman. The bespectacled and multi-talented musician, producer and composer serves as our erudite guide for the four-disc set deconstructing the beatles, taking us along on a “Magical History Tour” of a quartet of the group’s most important and influential albums.

From Rubber Soul, the 1966 LP that marked the beginning of a completely different approach to creating popular music, to the straight ahead and earthy rock roots of 1968’s The White Album, Freiman covers the oft-familiar (Revolver was the last studio album the band backed with a live concert tour) to the offbeat (“flushing out” background vocals for the Sergeant Pepper song “Lovely Rita” included John, Paul and George blowing through a comb and toilet paper). And throughout this fantastic journey his unparalleled treasure trove of Beatles bits and pieces consistently both inform and entertain.

I recently had the distinct honor of interviewing Freiman about his sensational series. I began by asking him when he realized he was in love with the music of the greatest rock group the world will ever know.

I was a classically-trained pianist, and my parents only listened to Broadway and Sinatra. Other than The Partridge Family, I didn’t know any rock and roll music. When I was 11, my hippie uncle leant me his copies of Sgt. Pepper, Magical Mystery Tour and The White Album. And just like hearing “Heartbreak Hotel” changed George Harrison’s life, my life was forever changed.

As an accomplished musician yourself, what do you believe is the most technically and creatively complex song the Beatles ever recorded?

There are many ways to answer this question. I would say that “Strawberry Fields Forever”, “A Day In The Life” and “I Am The Walrus” are the most creative productions that involved the whole band, as well as George Martin and Geoff Emerick. Probably should include “Tomorrow Never Knows”. Best orchestral arrangements – “Within You, Without You”, “Eleanor Rigby”, “Yesterday” and Abbey Road. But, there are so many other great examples of The Beatles’ outstanding compositional skills and performances and the production/engineering talents of Martin and Emerick (and Norman Smith before him).

Pure speculation, of course, but have you ever imagined what the Beatles would have done together had their career lasted even another five years? What do you feel the band may have been doing?

I may be in a minority, but I happen to think that there are many gems scattered through the individual Beatles’ solo output, as well as some great albums. Many of these tracks could have landed on Beatles albums, albeit in different arrangements. Unfortunately, the Beatles were no longer collaborating by the time they broke up. I would have liked to see them take time off to do solo albums and then reconvene from time to time to record as a group. Alas, we’ll never know.

Who is your favorite Beatle and why him?

Another tough question. I like John for his humor and his willingness to buck convention in life and in his songwriting. I like Paul for his gift of melody, his experimentation, and his bass playing. I like George for his mysticism, his wit, and his guitar solos. And I like Ringo for his drumming, his voice, and his good nature.

I know you say in the series that you have never personally met a Beatle, but have you ever corresponded with one of them in any manner?

I have not. I believe that the two surviving Beatles know what I’m doing, and I day dream about Paul or Ringo sneaking into a theatre incognito to see one of my films.

You’ve indicated that the band’s glorious final studio album, Abbey Road, is next on your list of “deconstructions”. When do you anticipate that production will be available? I can’t wait!

deconstructing the beatles is now available to buy in the 4-DVD set and streaming each album individually by going to Scott Freiman’s web site at deconstructingthebeatles.com and then clicking on the “DVD/STREAMING” link at the top of the page.

"deconstructing the beatles": Required Viewing for any Fan of The Fab Four

"deconstructing the beatles": Required Viewing for any Fan of The Fab Four

I guarantee there exists no bigger devotee than grand master “Beatleologist” Scott Freiman. The bespectacled and multi-talented musician, producer and composer serves as our erudite guide for the four-disc set deconstructing the beatles, taking us along on a “Magical History Tour” of a quartet of the group’s most important and influential albums.