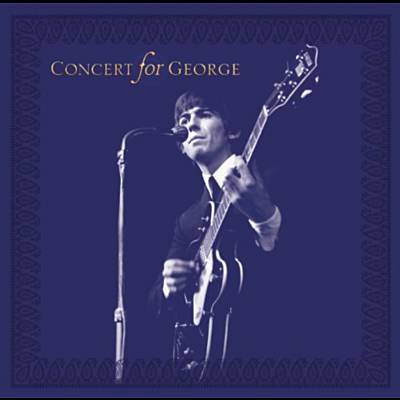 The late George Harrison was labeled “The Quiet One” among the members of the greatest rock group the world will ever know. The iconic songwriting team of John Lennon and Paul McCartney blasted The Beatles into the highest stratum of eternal superstardom during the 1960’s. But the music of Harrison was often every bit as substantial and enduring as his uber-talented band mates. And at times, it was simply better.

In honor of what would have been Harrison’s 75th birthday last month, the 2003 documentary film “Concert for George” was re-released in theatres. And what a stunning tribute it is to the man who not only mastered the guitar but could also expertly play a staggering 25 other instruments, as well. Even at over two hours I found I wanted this show to go on and on, having become thoroughly immersed in the magic of the music and spellbindingly captured by the unfiltered passion with which it is expressed.

Longtime confidante Eric Clapton co-organized the mega-event with Harrison’s widow, Olivia, and also served as Musical Director. The grand performance was held at the prestigious Royal Albert Hall in London on November 29th, 2002, one year to the day that George had passed away due to complications of multiple-cancers at the age of just 58.

The set list of “Concert for George” is transcendent. From Clapton’s other-worldly lead guitar virtuosity on The White Album‘s spiritual rocker “While My Guitar Gently Weeps” (with a little help from his friends, ex-Beatles Paul on piano and Ringo Starr on drums) to the sublime silliness of “I’m a Lumberjack (and I’m OK)” by the ground-shattering British comedy troupe Monty Python (one of George’s all-time faves), these brilliant renditions of historic Harrison classics (or tunes he adored) are uniformly delivered with moving respect and power. But most of all, they are all born of love, pure and genuine.

Precisely as George would have it.

"Concert for George" pays Homage to a "Quiet" Musical Genius

Summary"Concert for George" pays Homage to a "Quiet" Musical Genius

…these brilliant renditions of historic Harrison classics (or tunes he adored) are uniformly delivered with moving respect and power. But most of all, they are all born of love, pure and genuine.

Precisely as George would have it.