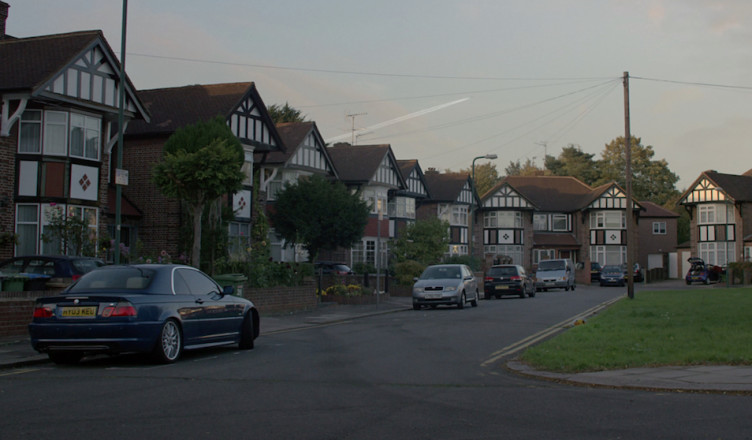 Over presents a crime scene. During the course of 9 wide shots, told in reverse order, we witness an intriguing story unfold. What has happened in this quiet neighborhood? A murder, a hit-and-run, an accident? The reality is profound, and deeply unexpected.

Over is the distinctly unorthodox dramatic recounting of a mysterious and unsettling actual event from the recent past which occurred in West London. Deftly directed by Jörn Threlfall and selected for inclusion in this year’s “Sundance Film Festival”, the story unfolds in deliberate fashion through scenes presented in chronologically reverse order.  What begins as routine and mundane winds up packing a helluva wallop.

At first I found Threlfall’s technique of using muted and incidental sound to be a bit off-putting. But then gradually I came to realize that it’s all part of the process, and that the overarching intent is to not reveal too much as meticulously momentum builds toward a stunning conclusion and the ensuing exposition.

The setting of a neighborhood block quietly ensconced in an upper class suburb, while seemingly innocuous initially, in time assumes a disquietingly ominous atmosphere as Threlfall purposefully puts the pieces of his provocative puzzle in place.

That’s about us far as I can go without risking an ending spoiled. Except to offer that with his brief chronicle, Threlfall has brilliantly constructed a disturbing account of how far the desperate of our world may go to escape inexorable hopelessness in pursuit of even the remote possibility of a better life.  The resounding take away from “Over” for me is that, irrespective of outcome, any lingering traces of discomfort will be washed away.  And life goes on.

So let us all eat, drink and be merry.