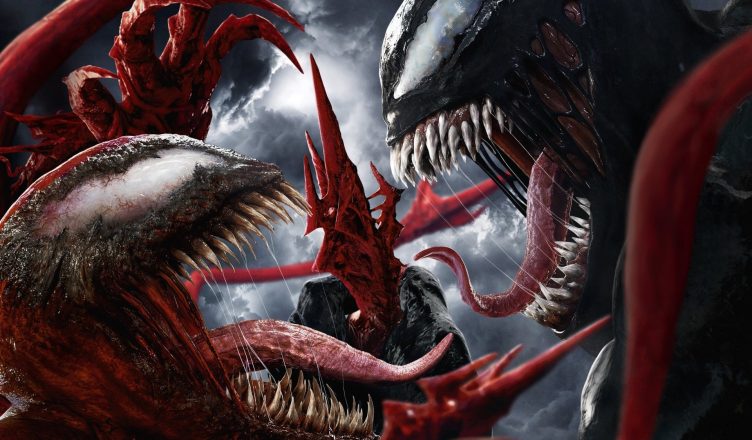 Tom Hardy returns to the big screen as the lethal protector Venom, one of MARVEL’s greatest and most complex characters. Directed by Andy Serkis, written by Kelly Marcel with the story by Tom Hardy & Marcel, the film also stars Michelle Williams, Naomie Harris and Woody Harrelson, in the role of the villain Cletus Kasady/Carnage.

Venom: Let There Be Carnage Trailer:

It’s easy to say that the driving force of Venom: Let There Be Carnage is the performance from Tom Hardy as both Eddie Brock and Venom. Their bond is the soul of the film. Given how different they are, their minor disagreements are funny to see and they make the odd couple routine work. It was refreshing to see how both characters actually complimented one another, and helped in making the other better in various ways.  I thought the funniest parts were when Venom would provide color commentary whenever Eddie was speaking to someone else. Venom’s off the wall comments would definitely garner a couple of hearty chuckles. 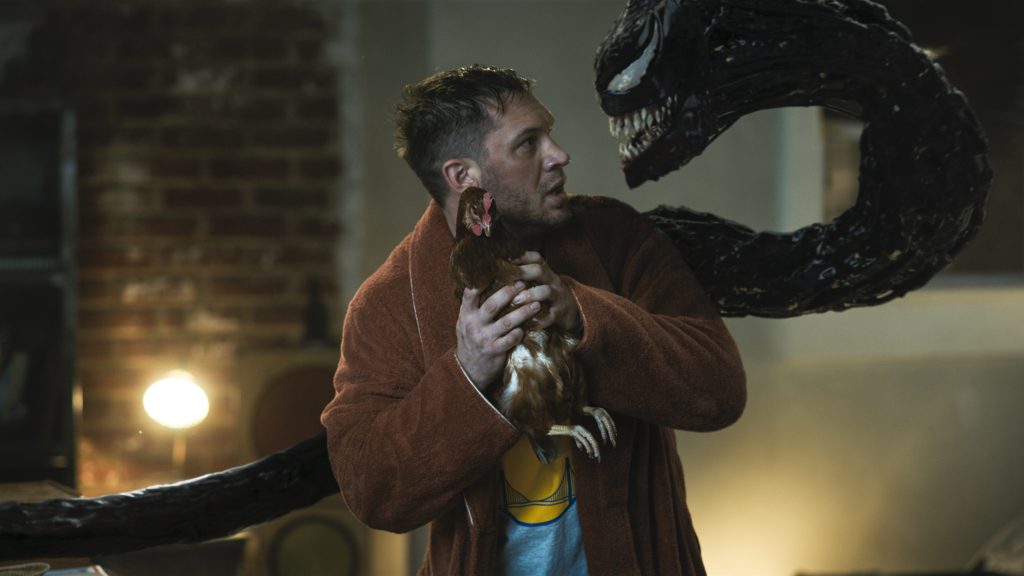 The other worthwhile thing going for Venom: Let There Be Carnage was the action.  I loved the fact that we could actually see the distinct difference between the two symbiotes that were fighting. The lighting and visual effects made a nice improvement to help with that. It’s just too bad we couldn’t have gotten more fights save for the one big fight at the end of the movie. The big battle at the end was entertaining to say the least.

The writing for Venom: Let There Be Carnage was just terrible. There were just far too many things that didn’t make sense, or sounded outdated, or were just cringe-worthy. Let’s start with the comedy first. Yes, this movie does have some legitimately funny moments as I previously mentioned, but that didn’t mean all of the humor landed. For example, there’s a fun little comic book reference thrown around that comic book lovers will pick up rather quickly. The two-word reference was cool the first time it was dropped. Then it was nice the second time it was referenced. However, after the 6th or 7th time the joke just got old real fast. It’s totally fine to have inside jokes within the movie, but this just became “joke abuse”. A running joke isn’t funny when it’s been run into the ground so many times. 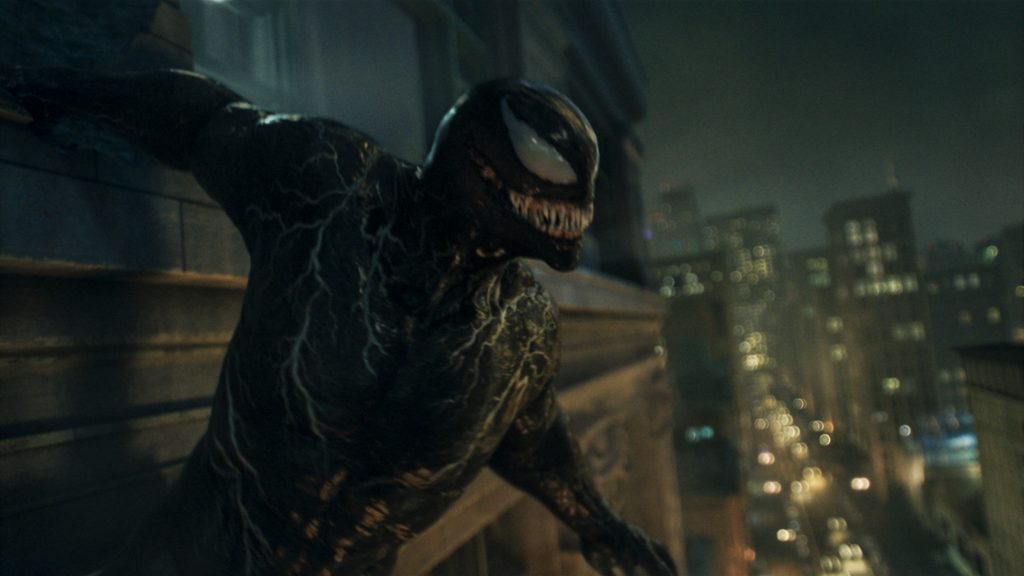 Next up, the character development took a major hit because it barely existed for any of the roles. It almost felt like the writers simply didn’t have any fresh ideas for Venom. All he wants to do is eat brains and Eddie just wants to stop him. This may have worked for the first film, but it gets pretty tiring as it drags on in the film. 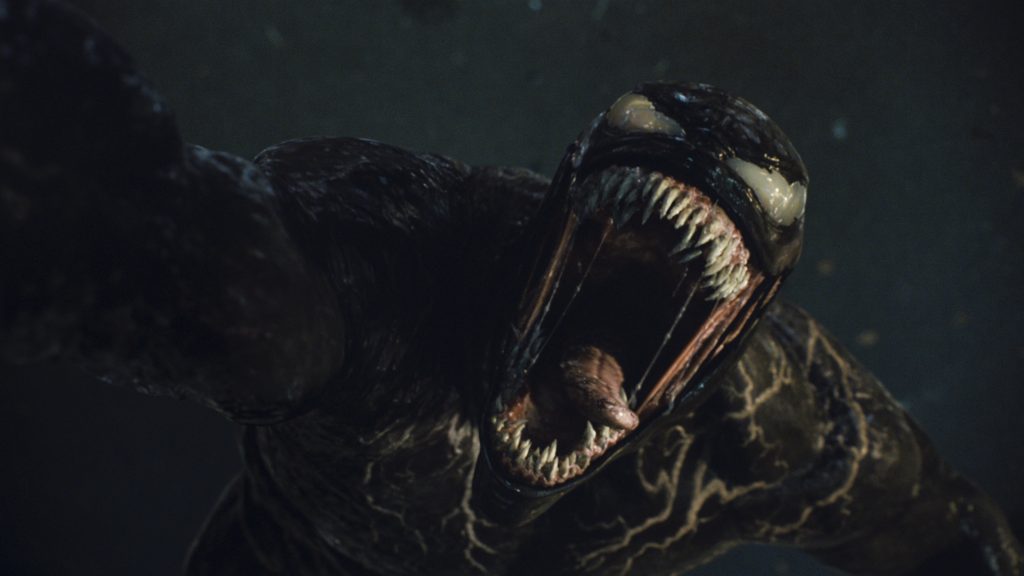 Some of the character motivations simply didn’t add up either. It’s hard to say whether this was on the writing or if it was poor editing from director, Andy Serkis. For example, there’s a character who all of a sudden has a shift in their motivations. It literally made no sense what so ever. This character was on a certain set path, and then they just change their mind because… I don’t know. Nevertheless, most of the characters are just going through the motions, and given cheesy catch phrases to say as if we were still in the early 2000s. 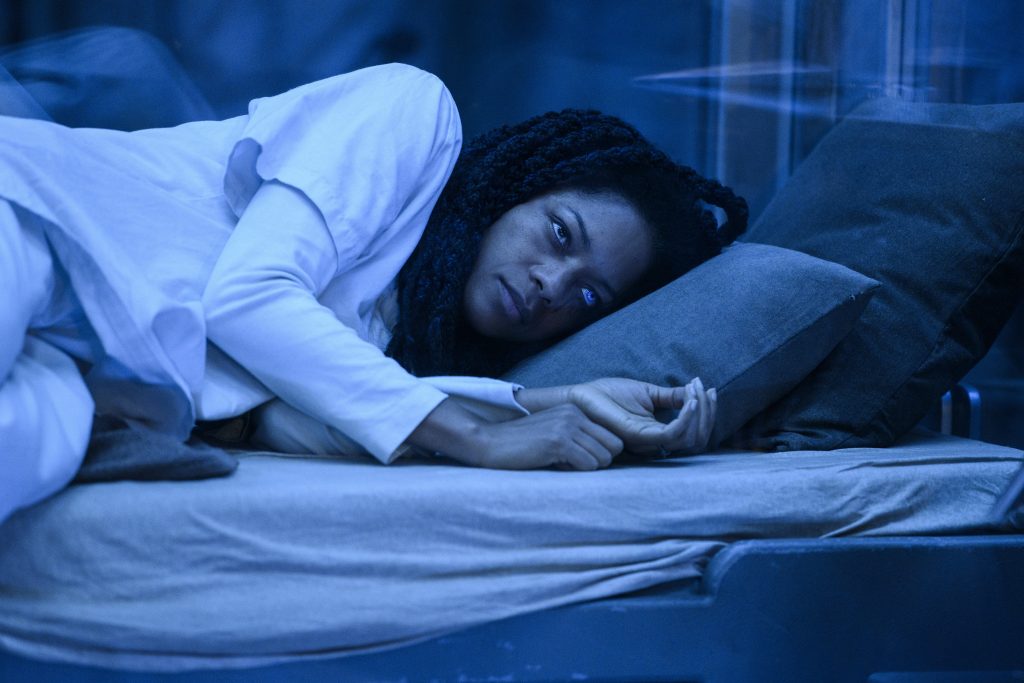 The craziest thing is that this movie even drops the ball with Carnage too. They nailed it when it came to his violent nature, but there’s little to no explanation as to why he hates Venom. The only thing we get is the funny line from the trailer about him being “a red one”. Since Sony wants to introduce symbiotes through this Venom franchise, the least they could’ve done was provide a bit more information about Carnage. 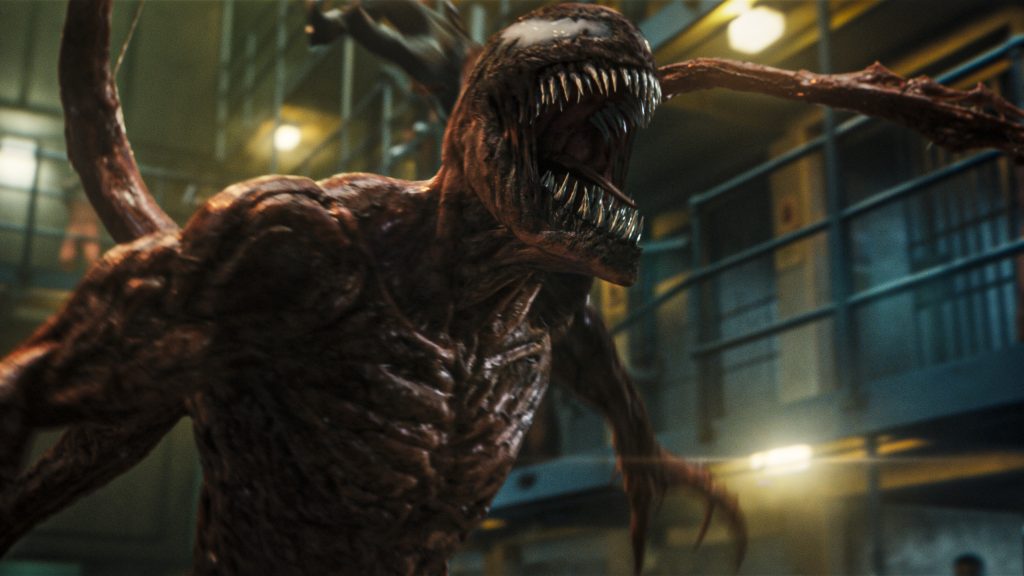 It’s ironic because the comic book character was based on the Joker, and you’d think that of all characters, Carnage would be the biggest strength to the film. As I reflect back on the film, I can’t say that I ever felt like there were any real stakes or a huge sense of urgency with Carnage either. In the comics, Carnage was such a big problem that it took the combined efforts of both Spider-Man and Venom to take him down. Unfortunately, in this film, Carnage is reduced to being just a wasted, one-dimensional villain. 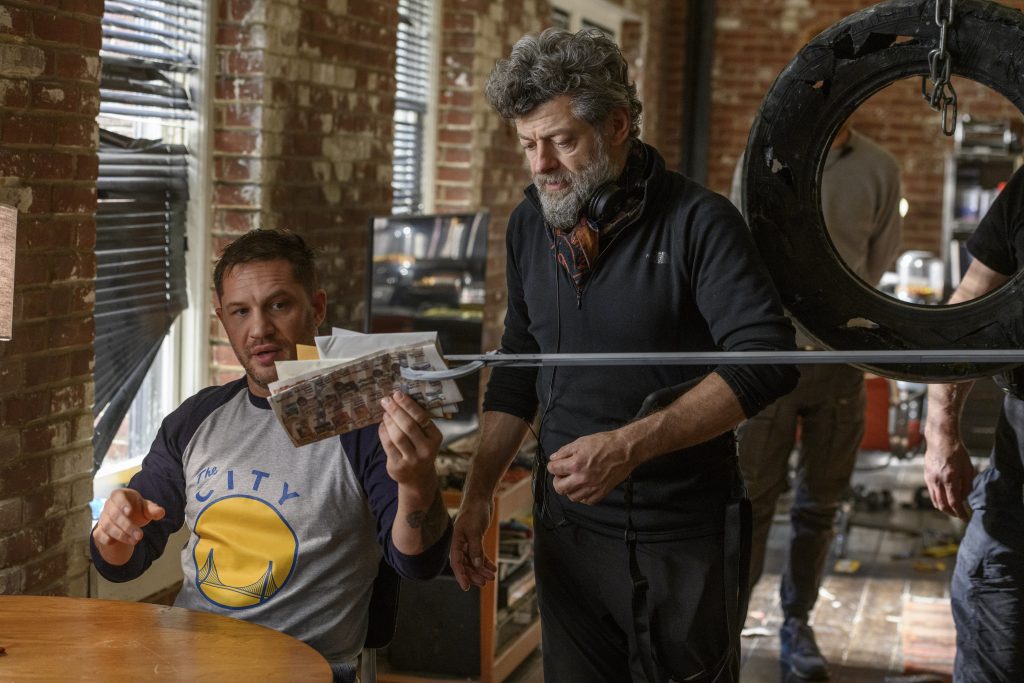 I mentioned earlier that the relationship between Eddie and Venom were a strong suit for Venom: Let There Be Carnage, but the rest of the plot just falls apart. There are moments in the film that are teased but aren’t clear enough for audiences to understand. For instance, there’s a specific scene with the police officer that only the deepest of comic book readers may understand. The problem here is that the movie itself doesn’t draw a clear enough connection to help the other viewers understand what happens at that moment. All of this points to a lack of vision from the director to portray a coherent story. I’m not saying he should hand hold audiences throughout the movie, but he basically dropped us off in the middle of nowhere and told us to walk back home.

Venom: Let There Be Carnage is a technically unsound movie that can’t hide behind the “It’s for the fans” excuse. It’s more of the same from the previous Venom film, and lacks anything innovative to push it forward as a sequel. This movie does indeed have some fun parts that are sure to be entertaining. Yet, no amount of fun absolves this film from having a semi-decent script or a coherent plot. It honestly felt as though the cast and crew had more fun making the movie, rather than putting the effort into making the movie better quality. 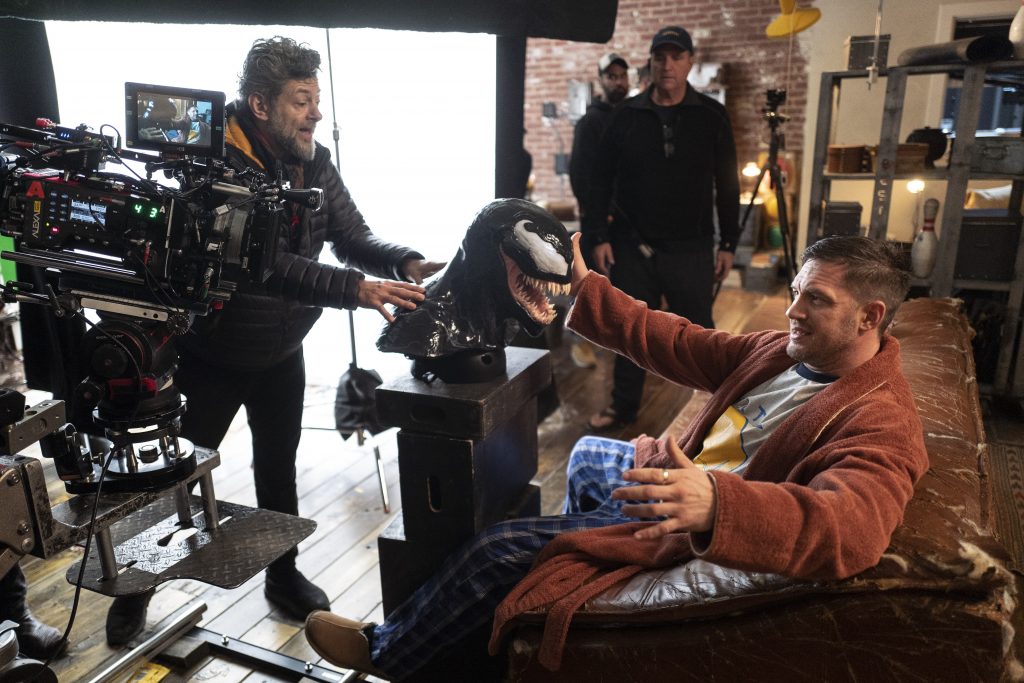 Was anyone expecting an Oscar award level movie with Venom: Let There Be Carnage? Absolutely not. Does that mean that fans should be so readily accepting of sub-par films just because they throw in a few jokes and comic book Easter eggs? No! So, let’s get those poor arguments out of the way. The basic expectation with Venom: Let There Be Carnage was to not screw it up. Unfortunately, it did. There was far too much star power and money thrown into this movie for it to be so remedial. Fans deserve better than this.  Frankly, it’s low-key insulting that fans are asked to pay money for this. 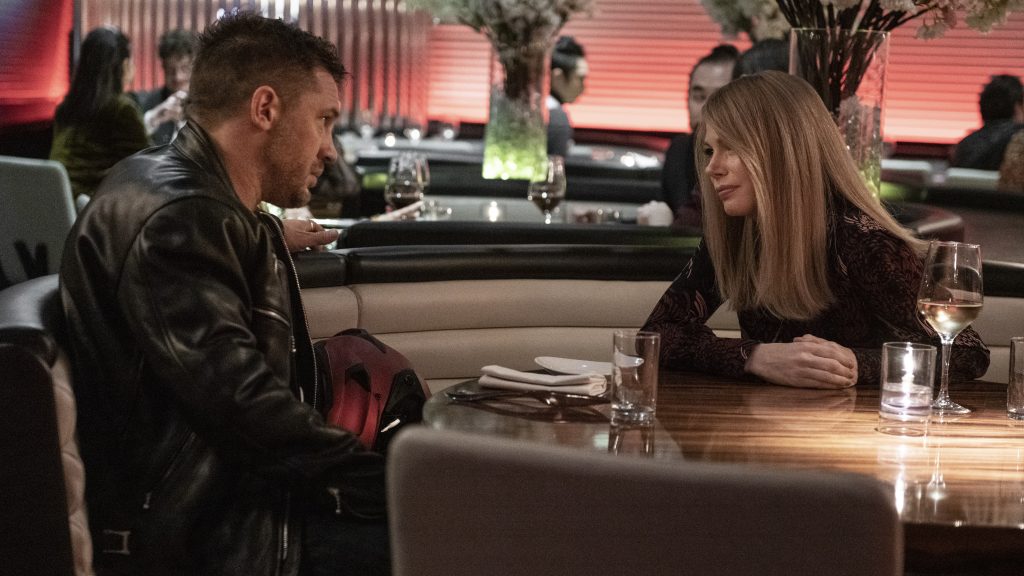 Venom: Let There Be Carnage is giving me major trust issues with Sony Pictures. Their deal with Marvel Studios is coming to an end soon. (Marvel Studios is not involved with the production of the Venom franchise) The belief is that Marvel Studios will no longer help them with their Spider-Man movies. If the Venom franchise is any indication of what Sony will do with Spider-Man, then I’m nothing short of flat out worried. The sad thing is that Venom should’ve been what Blade (1998) was for Marvel. Venom could’ve been Sony’s version of Spawn, but they chose this, PG-13, buddy rom-com route instead, to try and mimic the Marvel Studios formula. I’m sure it works for some people, but I think it’s just a missed opportunity for Sony to pave a unique path with their Spider-Man Universe. Ultimately, with the lack of quality control on Venom: Let There Be Carnage, this movie feels like a mindless cash grab. 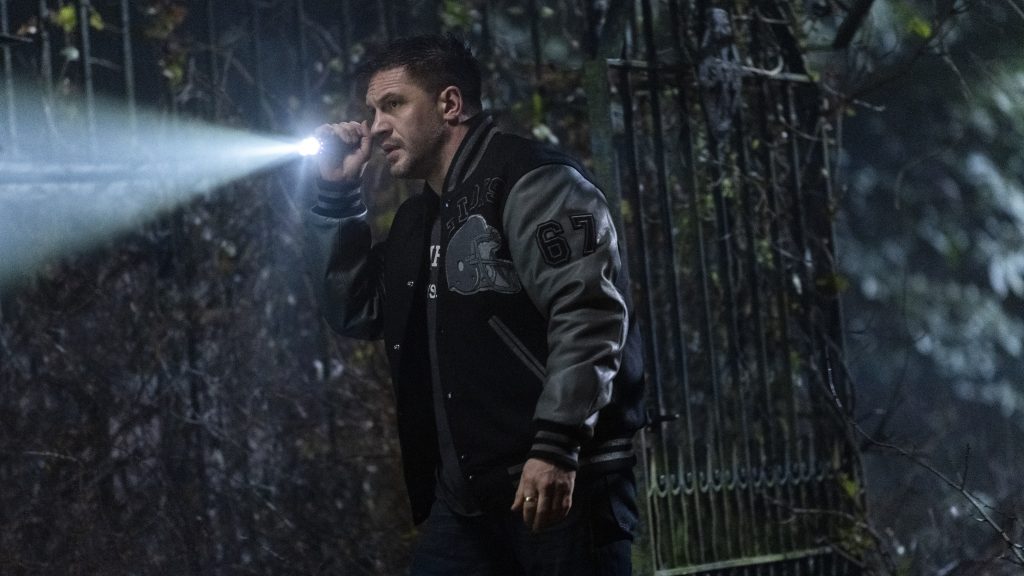 I openly admit that I wasn’t the biggest fan of the first Venom movie, but I respected what it was able to bring to the box office table. I respect the fact that other people may enjoy both of these films even if they don’t work specifically for me. I went into this film with even lower expectations and this film still didn’t land for me. Does that mean it won’t work for others too? Maybe. Maybe not. I think that if you enjoyed the first Venom movie then you’ll more than likely enjoy this sequel too. I think the more disappointing aspect is the fact that the post credit scene in Venom: Let There Be Carnage is the best part to look forward to. Keep in mind, it’s usually not a good sign when the post credit scene is more memorable than the entire movie itself. 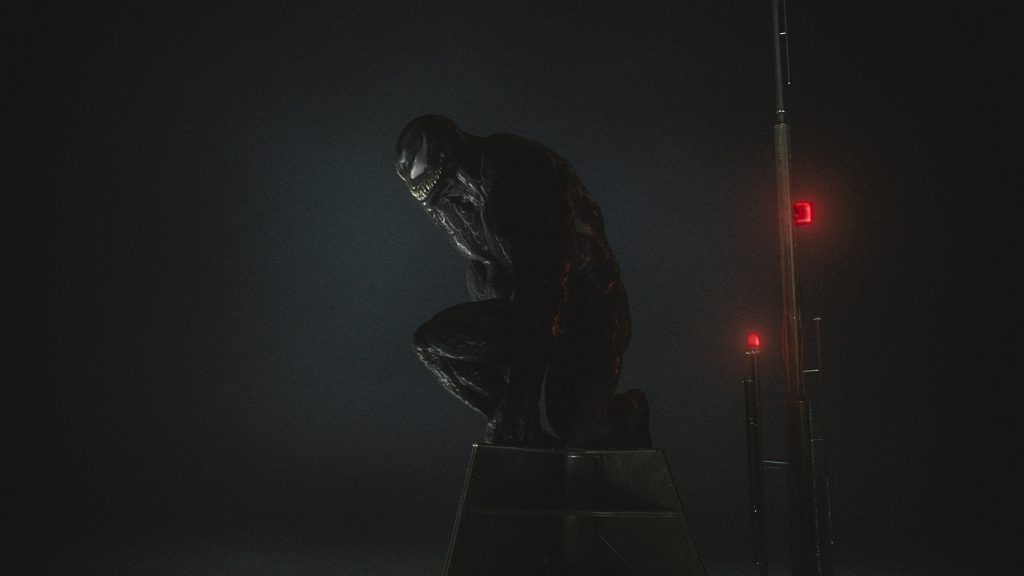 Despite Venom: Let There Be Carnage not being my cup of tea, I’d still encourage audiences to go see it and make up their own minds. Some people like the brand of comedy that Venom: Let There Be Carnage is selling, and that is totally fine. There is no real right or wrong answer when it comes to what personally entertains you. I would contend that it’s also entirely possible for all of us to accept the fact that we can be entertained and enjoy technically bad movies. So feel free to check it out in theaters if you were previously excited to go see it. If you weren’t excited, then take all the time you want to wait for it to hit streaming if you choose to see it at all. 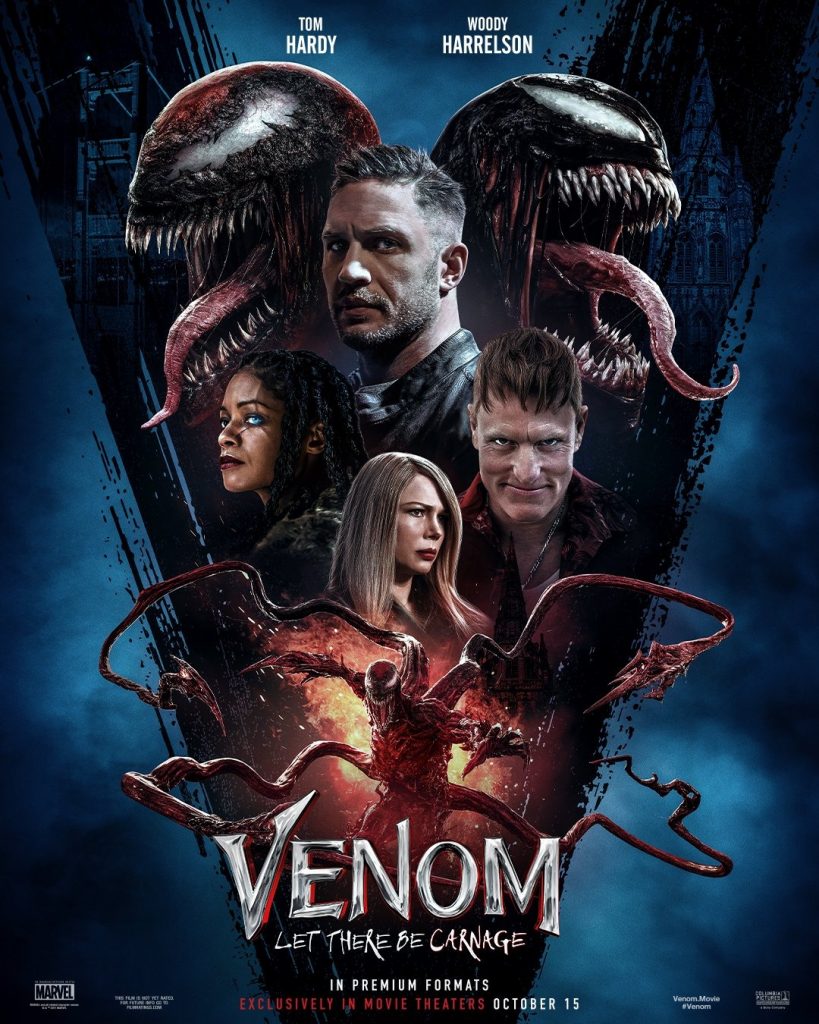