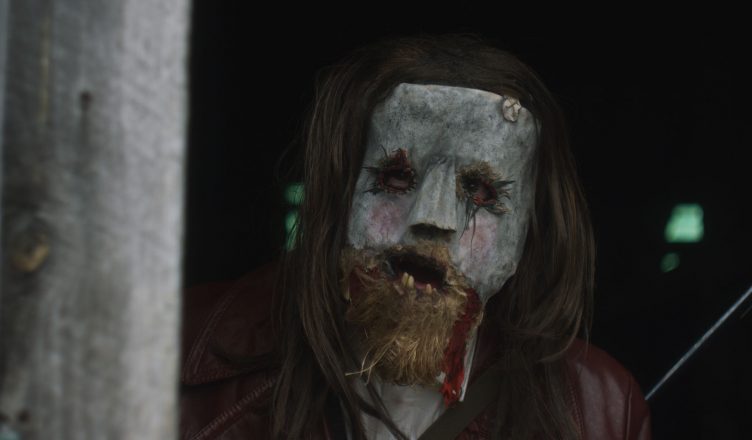 A social media prankster and his fiancée find their idyllic country weekend turn into the ultimate video prank where the stakes are life and death in this Canadian horror thriller.

There are things “Making Monsters” gamely strives to make the most of here. Only to ultimately shoot itself in the ass.

We shall turn each cheek, as it were, using the corresponding representation of opposing aspects a & b in “The Good” and “The Bad”…

1a) The deranged psycho killer has a sick sense of humor.

2a) The cinematic trend of skewering social media stars continues. Literally. And it’s well played. For a period.

1b) Alas, only to be offset with the vague and feeble religious fanaticism undertone.

2b) And then plays straight into every horror trope trotted out since time commenced.

The filmmakers would appear to dig the Tobe Hooper horror benchmark “The Texas Chainsaw Massacre”, mimicking that movie both in style and via vile villain. Still, this crazed cretin is gonna have to settle for a label of “Leatherface Lite”.

What begins with ample ambition limps lamely into lazy…

The potential plus points notwithstanding, what initially seems like a thoughtful scary story sinks into typical hide ‘n seek shock schlock. And then drowns itself in a cesspool of disappointment.

When even the “surprise ending” fails to startle you know you’ve made a monster misfire.

"Making Monsters" (2021) could have made for a Better Flick

"Making Monsters" (2021) could have made for a Better Flick

There are things “Making Monsters” gamely strives to make the most of here. Only to ultimately shoot itself in the ass.