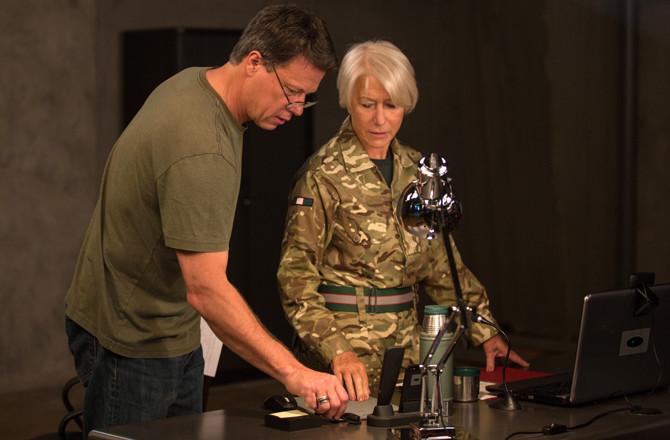 Upon the release of ”Eye in the Sky” (out now in theaters) I had a chance to speak to the director of the film Gavin Hood. In the interview Gavin discusses the film. Among the topics of discussion were military drones, the real military people who inspired the film characters, and the failure of “X:Men Origins: Wolverine”. Check out below for highlights and the entire audio of the interview.

You see so many military and war film take place in Afghanistan and the Middle East, the first that that struck me was that this is taking place in Africa. What prompted you to deviate to a place like that?

Gavin: The reality is that we are flying drones over seven countries right now, one which is Somalia in East Africa because of the presence of Al-Shabaab, it isn’t discussed very much. As you say everyone does seem to focus on Afghanistan and Iraq, but the truth is that this battlefield is spreading.

Gavin on the usage of drones:

People get hung on on the drone. The drone is just a new piece of military technology. In every stage of the evolution of warfare there has been a new form of technology. The point is that it’s just a new weapon, the real question is what’s the smart use way to use the weapon.

There is a lot going on in this film. I enjoyed how you humanized the characters.

Gavin: What was so great doing this film was that we interviewed lots of real people, we didn’t make these guys up. The military adviser that we had working with Aaron used to be a F-16 pilot, he flew in the Iraq war, he was a fighter pilot for ten years, a drone pilot for only 6.

Check your local theater listings for Eye in the Sky