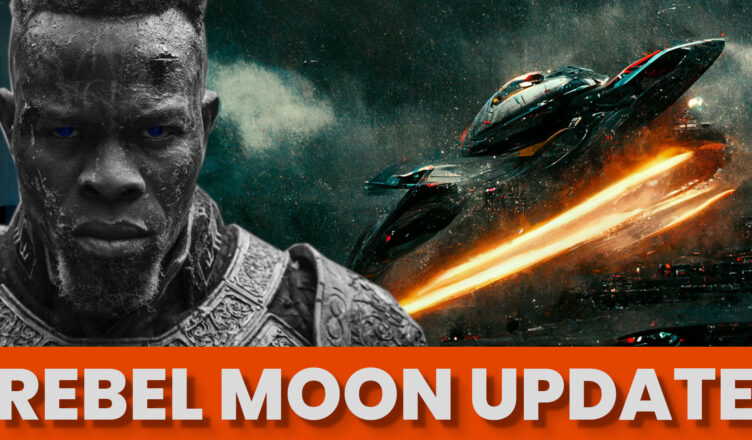 A new set video from Netflix and Zach Snyder’s upcoming Film Rebel Moon showcases a massive practical spaceship. Rebel Moon is an upcoming space epic that is currently in production and features Sofia Boutella, Charlie Hunnam, Anthony Hopkins, Jena Malone, and Djimon Hounsou among others. The plot revolves around a young woman who seeks out warriors from other planets to fight the tyrannical armies terrorizing her peaceful colony. The film currently has no release date but will release exclusively on Netflix.

A leaked set video from Rebel Moon shows off a massive practical spaceship near Santa Clarita. Rebel Moon is currently in production and is filming in California. The video is crystal clear and shows off one absolutely massive spaceship. It has a similar look to a walker from Star Wars: The Clone Wars while at the same time having a very Zack Snyder design. It also bears a resemblance to the ships from Man of Steel that Zack Snyder directed. The set piece is impressive, to say the least, and this is before they added CGI. The finished product is sure to look amazing.

When flying in busy LA airspace, we are always looking out for other aircraft so it was a bit of surprise to spot THIS aircaft today near Santa Clarita. Little google searching and looks like this is the set of #RebelMoon … an upcoming space epic on #Netflix from Zack Snyder. pic.twitter.com/HXcsml9rVp

Prior to writing this article, I was not that stoked for Rebel Moon. Sure, I’m a Zack Snyder fan, but not everything he has done has wowed me. After reading the synopsis and behind-the-scenes snippets I’m definitely on board for this movie. Rebel Moon takes inspiration from Star Wars and the images from the movie remind me of Dune. Plus, the cast is pretty awesome and like I said, I’m a Zack Snyder fan. As far as the video goes I think the spaceship looks awesome. It has Snyder’s unique style and I’m impressed they built it to scale basically. The thing is massive. Rebel Moon is pegged as being a space epic and everything we’ve seen lives up to that description. We don’t know when the film will be released but I can’t wait until it comes out on Netflix.

Plot Synopsis: A peaceful colony on the edge of the galaxy is threatened by the armies of a tyrannical regent named Balisarius. The desperate civilians dispatch a young woman who has a mysterious past to seek out warriors from nearby planets to help them challenge the regent.