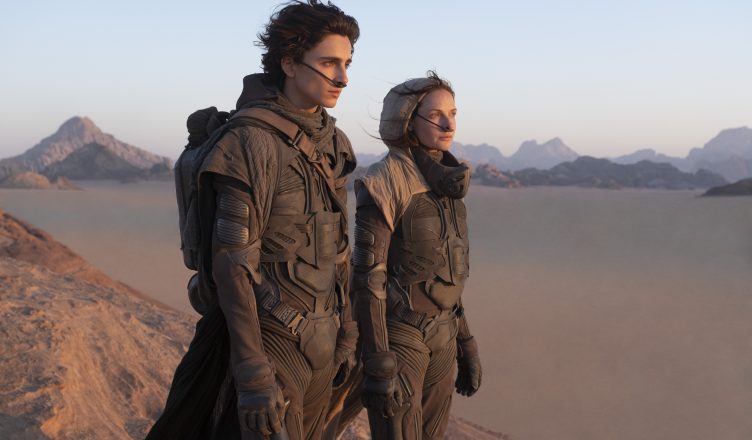 A mythic and emotionally charged hero’s journey, Dune  tells the story of Paul Atreides, a brilliant and gifted young man born into a great destiny beyond his understanding, who must travel to the most dangerous planet in the universe to ensure the future of his family and his people. As malevolent forces explode into conflict over the planet’s exclusive supply of the most precious resource in existence—a commodity capable of unlocking humanity’s greatest potential—only those who can conquer their fear will survive.

The hands down, best thing going for Dune is the stunning visuals from beginning to end. Director Denis Villeneuve compiled a beautiful collection of scenes that are truly a sight to see. One thing you’ll notice is how the cinematography seamlessly compliments so many elements in the film. The setting and world building feel like they come alive with the wide panning shots from the desert to the huge space crafts. The imagery alone in Dune really makes this world feel real and vibrant. Not only that, but the unique camera angles really amplify the tone in particular scenes. Dare I say, Dune is so masterfully shot, that you could watch this movie on mute and still be entertained.

Another positive for Dune is that the plot was easy to follow. Despite the dense, sci-elements in the story, I appreciated the focused approach on only one group/family. It was helpful to explore this fantasy world and all the cool technology through the perspective of just a few characters. As a result, it doesn’t take long to have a sensible grasp of the underlying politics and motivations of various characters. 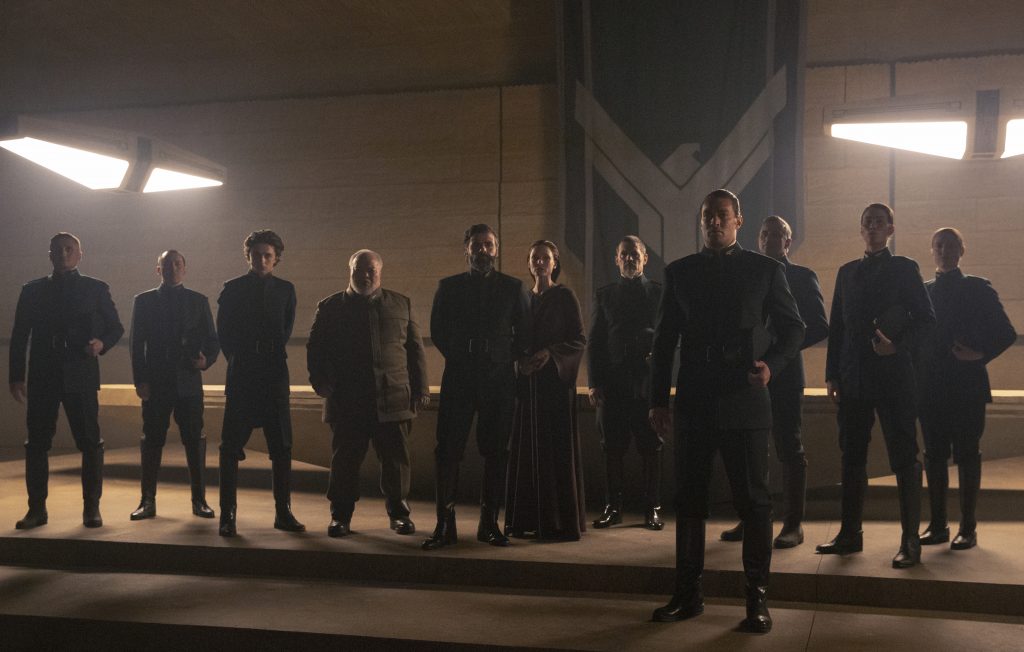 Of course, there’s no way anyone could ignore the fantastic cast that star in this film. Timothée Chalamet was exceptional as Paul Atreides. His performance made me care about his character’s journey and his potential growth. Oscar Isaac as Duke Leto was also great in his role. He presented such a stoic feel to his character that almost steals every scene he’s featured in.

I think my personal favorite may have been Jason Momoa as Duncan. While the role may have been small, this was right in Momoa’s lane especially when it came to his fight scenes. Of all of the roles, Stellan Skarsgård surprised me the most as The Baron. He was completely unrecognizable thanks to both his delivery and the Dune make up team.

Dune carries a runtime of about 3 hours that audiences have to mentally prepare for prior to watching. The long runtime isn’t the issue whereas the pacing of the film may be off-putting for some viewers. There’s a lot of dialogue and exposition that takes place in the film. Plus, it takes a while to get to some of the action scenes. Even those moments are spread throughout the film with a good amount of time in between. I don’t think this would be a concern for fans of the Dune franchise, or deep sci-fi lovers. However, I do think that casual viewers may run the risk of drifting in and out of focus in some pockets of the film. 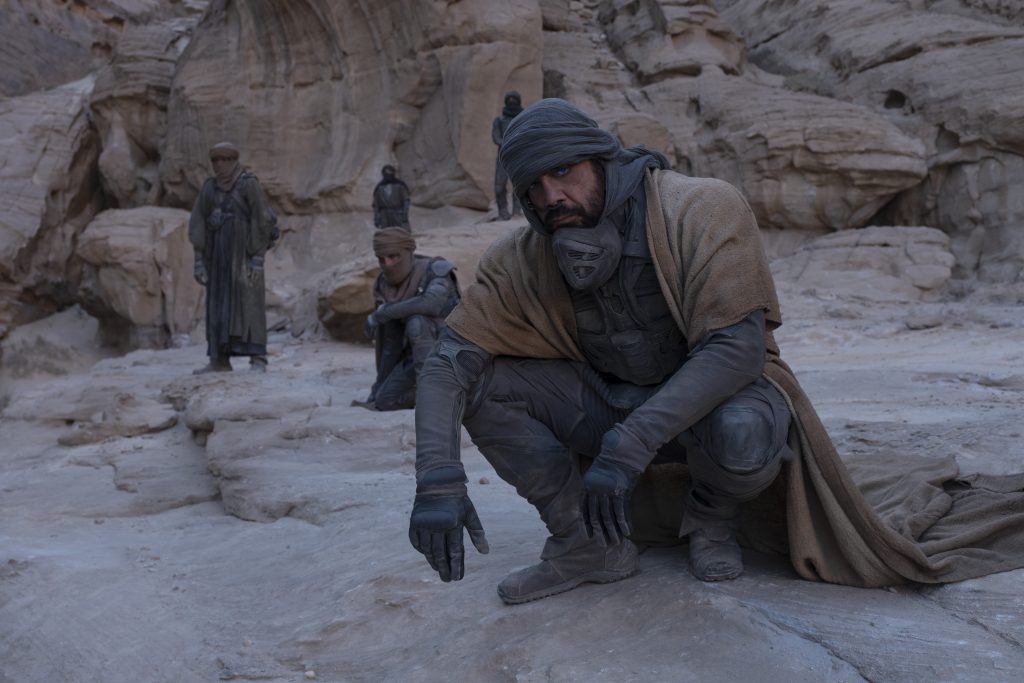 While the movie does have some captivating scenes, I thought some of the action scenes were a bit anti-climatic. If you don’t know what will happen in the rest of the story, then I can’t say that the way Dune ends will generate a lot of excitement for a sequel. The majority of the film was just fine, but the final conflict fell a little flat. 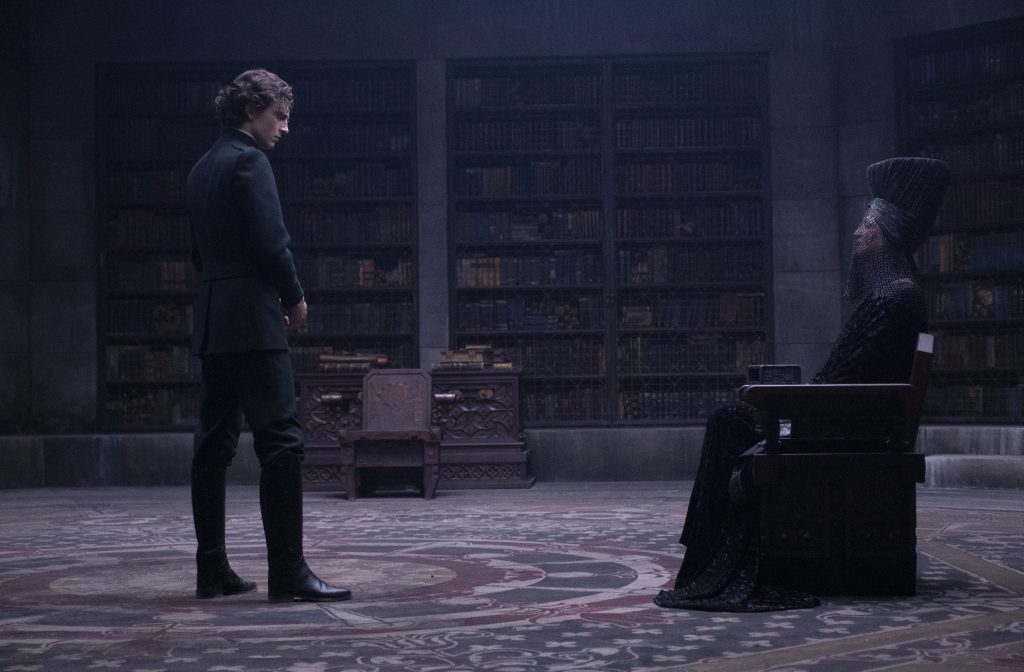 Finally, I was surprised to experience Dune with such poor sound quality. There are several scenes where characters will use a modified voice, or whisper and it was very difficult to make out what was being said. What’s frustrating is that the film does include subtitles in some scenes, but no subs in others. The crazy thing is that I watched this in a Dolby Theater (with premium sound quality) and this still was hard to understand what some of the characters were saying at times.

Dune was a beautiful movie, with a fantastic cast, telling a grand story fit for the big screen. Director Denis Villeneuve did a marvelous job of remaking this imaginative world and story into modern times. Dune is what other movies wish they could look like. I think fans of the franchise will be certainly pleased with this adaptation and newcomers will be happy too. Although, I’d still heed a sense of patience for anyone diving into Dune for the first time. 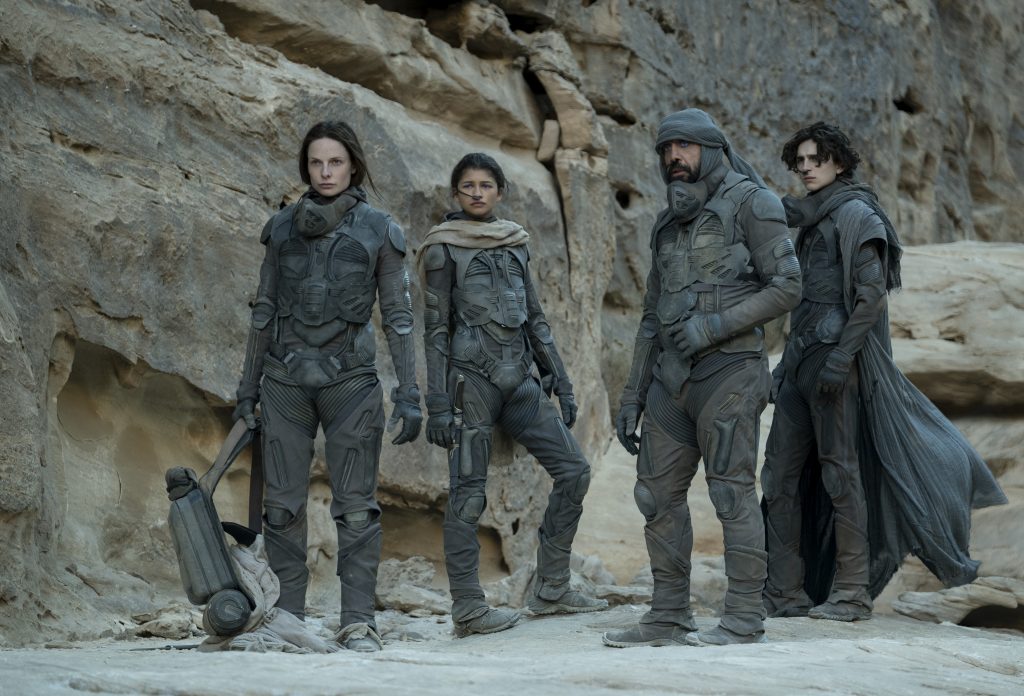 Initially, I had only heard about the Dune franchise through word of mouth. So before seeing this film, I did watch Dune (1984). In my opinion, that movie was a huge clunky mess and it was difficult to sift through on a first, cold sitting. I had to rewind back to the beginning a few times to understand all of the exposition and the characters. Thankfully, after watching the Dune (1984), that gave me the perfect buffer to fully appreciate this Dune. The characters were more familiar. The conflicts were more digestible and the technology was not even close to being as cringey as they were in the first film. I wouldn’t say watching the Dune (1984) is a requirement for first time viewers, but I’ll just say that it can help you appreciate the story and how far this remake has come with its updates.

I would highly recommend watching Dune on the biggest screen, with the best audio quality you can find. I can’t express enough just how fun of a viewing experience it was to see. If you prefer, you can also watch Dune on HBO Max as it will release there as well. 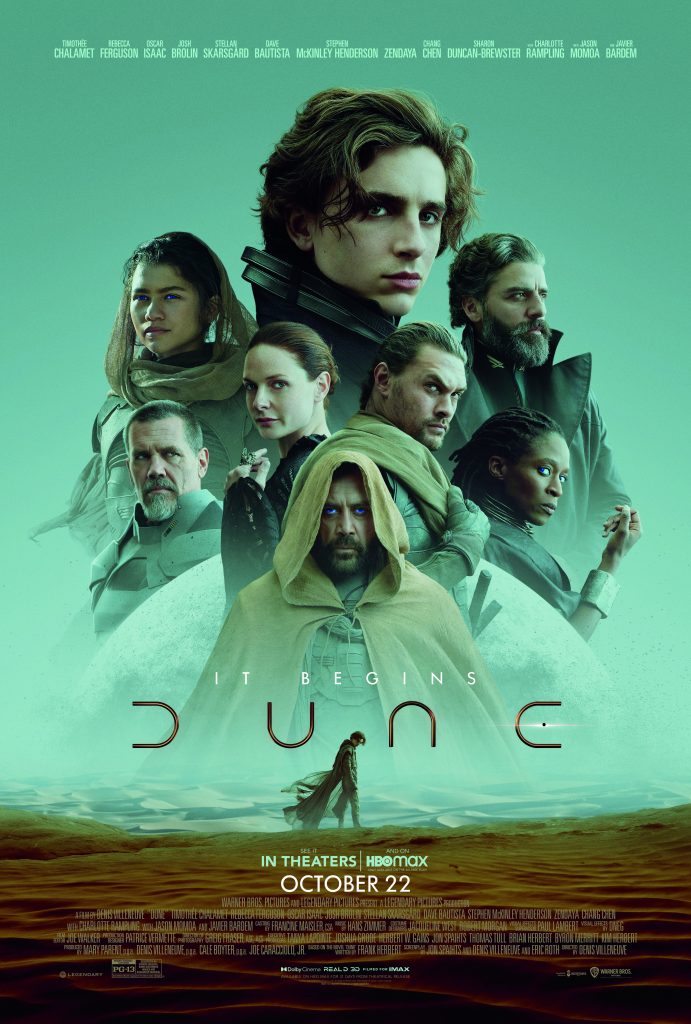