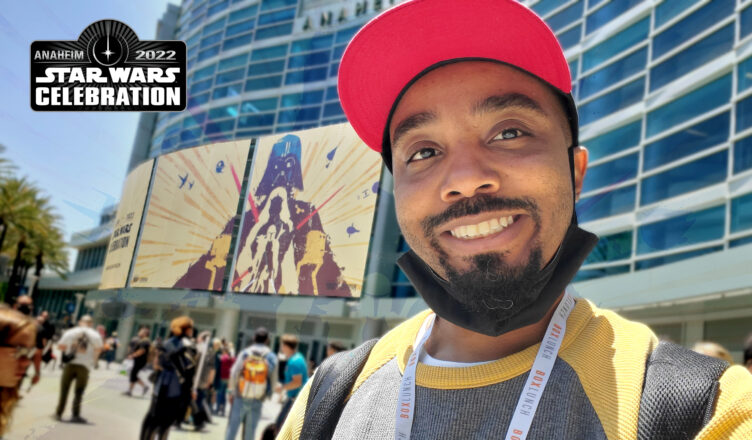 You know what? I had an amazing time attending The Star Wars Celebration in Anaheim California this year! What was great was that I got to attend an incredible show and the trip marked many ‘firsts’ for me to scratch off my bucket list. This trip was my first time attending the Star Wars Celebration which is very different than what I’m used to at New York Comic Con. After regretfully choosing to drive from LAX this trip also marked my first time in Anaheim California. This event is also checking off my first time visiting Disneyland! And, after about 5 years, this was my first in-person meet-up with my Correct Opinion collaborator Emmanuel “E-Man” Noisette. My excitement for being a Star Wars fan was at an ALL-TIME HIGH, except this was the first time I felt excluded at a convention.

The Star Wars Celebration dominated Anaheim between May 26, 2022 – May 29, 2022. On my first day at the Anaheim Convention Center, I noticed some gorgeous banners and signs for the Celebration throughout the area. I swear you could feel the excitement as you approached the venue. Cosplayers were noticeably dominating the Anaheim area and it was common to see cars of onlookers slow down just to take in a moment and watch. There were some gorgeous banners and signs on display creating a fantastic photo backdrop for cosplayers. I noticed that learned some of the best-looking cosplayers could be found at the water fountain near the entrance. I snapped up as many pictures as I could while rushing to take in as much of the show as I could. I had a lot of fun at the show covering fantastic panels and press events. The cosplayers were on another level at this show and the crowds and venue were much larger than I was expecting.

The Celebration exhibit show floor space was a massive and open area with lots of vendors. I’ve walked miles traveling from end to end in the Jacob Javits Convention Center for NYCC but this was different. I don’t know if there were more vendors than at other shows but it definitely took a good amount of time to check out the show floor in its entirety. My excitement for the Star Wars Celebration was at an all-time high but I felt some serious concerns that settled in after the celebration started.

How it Started – Feeling the Excitement 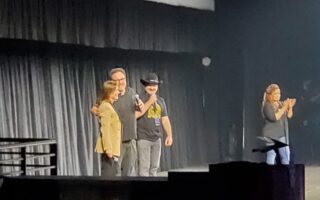 Day 1 was both very exciting and very nerve-wracking. E-man and picked up our press passes and rushed to the Press entrance for the Celebration Stage, exactly when instructed, but were told by staff that the press seating area was full. Thankfully we were able to get seats because Lucasfilm pulled out all the stops at the panel! The panel attendees got to see a live performance of Duel of the Fates with Ewan McGregor and Hayden Christensen appearing on stage to the song. Kathleen Kennedy joined them on stage along with many other castmates from Obi-Wan Kenobi to discuss the new show!

The panel continued to impress by bringing John Williams walking on stage!  John Williams was celebrating his 90th birthday and surprised the audience by conducting a live orchestra as they played some of his most iconic songs. This panel continued to impress because suddenly John began performing the theme song for the Indiana Jones with Harrison Ford walking on stage! This is a memory that will live rent-free in the minds of fans for years and was amazing to see live.

More notable appearances were Pedro Pascal, Diego Luna, Warwick Davis, and many other stars kicked off the celebration to a fantastic start. The panel delivered some first looks at The Mandalorian Season 3, a trailer released for Star Wars Andor, the announcement of Star Wars Skeleton Crew, and a lot more! The panel ended with the announcement of a screening of the first 2 episodes of Obi-Wan Kenobi with the majority of the cast in attendance with the fans. This doubled as a premiere and screening for everyone in attendance.

How it Went – Things Got Weird 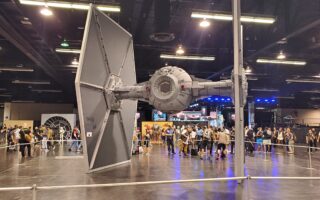 I  carved out time in my schedule to visit the actual exhibition floor which is where things got weird. I was hoping to find some merch featuring Jedi Master Mace Windu, the best fighter among the Jedi, but I couldn’t find very much in the way of merchandise featuring either Mace Windu, or Lando Calrissian, or Finn. I checked the entire show floor and all the merchants and was only to find a handful of items for sale with these characters. I understand that these are not leading characters in any of the Star Wars franchise shows or movies but I assumed it would be easier at this show. I saw a bunch of cool shirts and items for sale featuring Clone Troopers, The Millenium Falcon, The Death Star, K-2SO, Kuiil, Admiral Ackbar, Ewoks, and more. I somehow didn’t realize there was an official Lucasfilm store on another floor so I didn’t get to check that store out. In the end, I did find some merchandise with black Star Wars characters but not very many.

How it Ended – The Dark Side

That night I felt conflicted about my experience searching for souvenirs. I kept wondering if black characters and people of color are represented in Star Wars? I decided to do some research in between moving files from memory cards into the cloud via the extremely slow WiFi in the Hilton hotel. E-Man and I began discussing the experience and black representation in the Star Wars franchise. While doing my research I felt that the black characters in Star Wars were mostly supporting characters rather than leads. I could find merchandise with other supporting characters but it bothered me that there was only a small selection of items featuring black characters. 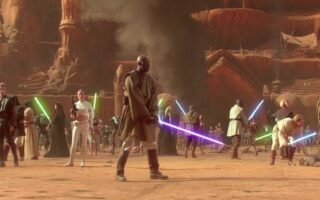 We began discussing whether there were any other Black Jedi besides Mace Windu. I confidently blurted out “There had to be, we saw a bunch of scenes with a large number of Jedi in the prequel films”. I cited Star Wars: Attack of the Clones as a good example of a film featuring multiple Jedi on screen.  There’s a scene toward the end of Attack of The Clones where Anakin Skywalker and Padme Amidalla were captured and forced into gladiatorial combat. Mace Windu and an army of Jedi Knights came to their rescue and I was certain some of them had to be black men or women.

I further went on to say with confidence that characters were likely even named as we learned in the ILM Press Panel that production had a penchant for naming background characters.  After searching frame by frame throughout the scene I found (2) other black actors fighting in the background. They’re listed on IMDB as  R. Christopher White playing the “Clone War Jedi” and he is also listed as sequence supervisor and development lead at ILM. The other actor is Leonard L. Thomas who plays “Roth-Del Masona – Arena Jedi”. A named Jedi. But these aren’t lead characters with any lines or discernable impact on the movie. We agreed that Star Wars does not yet feature any other leading black Jedi or leading black characters.

This was a sobering fact but the excitement of the next day of attending Star Wars Celebration began to sink in again. There was a ton of news to write about and we still had 3 more days of Celebration. We ended our day at this point and resolved to get some rest.

Next, we’ll talk about my Day 2 experience which had even more highlights and excitement than Day 1 but also featured some more disappointment about black fandom in Star Wars.