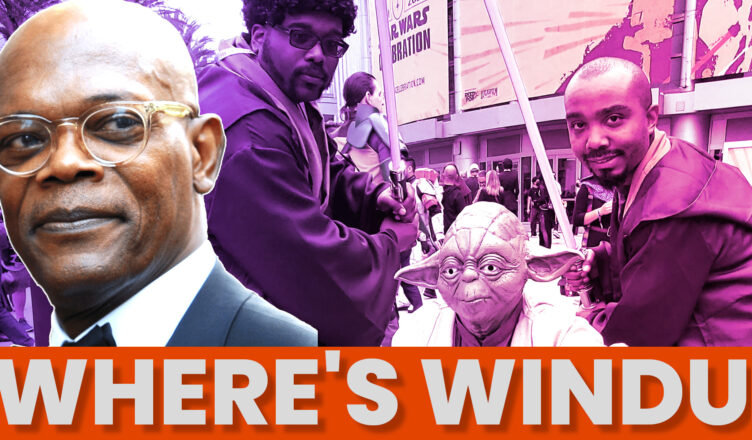 So I screwed up. E-Man and I recorded an awesome episode of The Correct Opinion This week. We discussed Ezra Miller and what’s been happening there. E-Man and I discuss the rumors of Giancarlo Esposito as Professor X! We even discuss how we would feel about a T’Challa Jr. in the MCU. We discussed it, it was epic, but I screwed up the recording and there’s a horrible echo throughout. 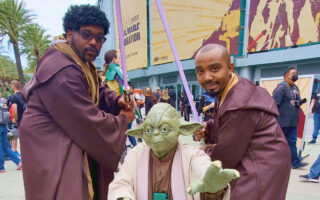 Star Wars Celebration Day 3 was sure to be a much better experience. We had a fantastic time cosplaying as Young and Older Mace Windu. E-man and I made it a mission to find anyone cosplaying as Anakin Skywalker and curse them the $%#& out for siding with the Sith.

We attended the Mando+ Panel at the Star Wars Celebration with Jon Favreau and Dave Filoni. There were a ton of other surprise appearances during the panel. Rosario Dawson, Giancarlo Esposito, Temuera Morrison, and Katee Sackhoff all make appearances. Something that stood out for me was when Katee was asked what it means for her to embody this character (the Armorer) that she has been a part of. Katee mentioned how her dad raised her on science fiction. She further discusses how he raised her on strong characters. When Katee was little she didn’t have a lot of strong female characters to choose from. Katee mentions Sigourney Weaver, Linda Hamilton, and Lucy Lawless but she wanted to be Bruce Willis! To be able to play the women she’s played throughout her career has been such a gift. Katee went on to praise Favreau and Filoni for writing strong characters who are women.

I left the panel feeling amazed at the announcements, the special guests, and the cool exclusive look we got to see of The Mandalorian Season 3. I continued to enjoy cosplaying around the show and taking photos but Katee’s words kept creeping into my mind. It’s not lost on us that we were cosplaying as the only (named) Black Jedi. In all of the Star Wars films and TV. We chose Mace Windu to inspire interest in the return of the character. Mace Windu was not proven to have died in Star Wars Revenge of the Sith and I would love to see Lucasfilm revisit the character. Hopefully sharing these photos online and expressing the desire to see more leading Black characters in Star Wars will begin the conversation. I love seeing Moses Ingram as the (current) main antagonist in Obi-Wan Kenobi and I know that she will inspire young Black girls the same way Katie was inspired by Linda Hamilton and Sigourney Weaver.

While cosplaying E-Man and I was stopped by Lisa Lafayette The Blerd. She asked us for a quick interview about our experience at the show. We jumped at the opportunity for some screen time in our sweet-looking costumes but were stunned by the question:

Do we feel satisfied with the diversity and representation at the Star Wars Celebration? We let out a hearty tear-inducing laugh. Nearby fans who couldn’t help but watch overheard us discuss our experiences searching for merchandise featuring black characters as well as the expensive pricing on the Mace Windu lightsaber. Thinking little of the conversation we began to gather our things and wrap up our day. While picking up our things a few nearby fans asked to speak with us about our interview. One fan went on to explain how they attended a panel earlier that day with the announcement that Mace Windu was returning for a new Disney+ show.

I later found out that this is a one-time appearance for the Lucasfilm Anthology series Tales of the Jedi which will also bring back Qui-Gon Jinn and Count Dooku. Another nearby fan chimed in and mentioned that he empathizes with us. This part hit different because he went on to explain his excitement and importance to see a fellow Latino like Diego Luna leading Star Wars Andor. He specifically said how important it was to see someone who looks like him leading a Star Wars series. I am extremely happy and thrilled to see that look on someone’s face when they connect and feel inspired by one of these characters because they see themselves in the character. I love that he was able to feel that way and hopefully Diego Luna will inspire children across the country who feel they relate with his character in that way. My children should get the opportunity to feel that way about a Star Wars character too.

I love Star Wars and I love the time I had attending the Star Wars Celebration in Anaheim. I hope to attend more in the future and I hope to feel like I relate to a character the way that Katee does with Sigourney.

Disney’s Star Wars Celebration is the only event dedicated to Star Wars organized by Disney. I was happy to attend, along with @EmansReviews, the show this year in Anaheim California. The show took place from May 26th – to May 30th, 2022 and Lucasfilm is announcing that it will take place in London in 2023.