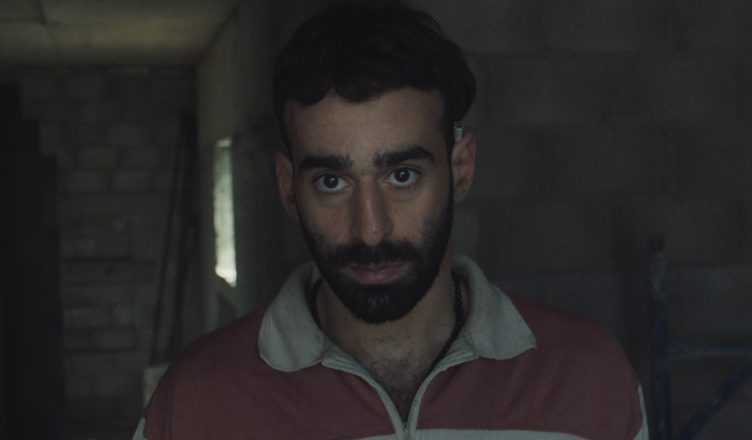 Warsha follows Mohammad, a Syrian migrant working as a crane operator in Beirut. One morning he volunteers to take on one of the tallest and notoriously most dangerous cranes in Lebanon. Away from everyone’s eyes, he is able to live out his secret passion and find freedom

This ground-breaking film has been selected to screen at the prestigious Sundance Film Festival (Jan 20-30) and Clermont Ferrand (Jan 28-Feb 5).

Warsha begins with a day in the life of a Syrian worker named Mohammad–played by multi-disciplinary artist, Khansa. From the opening scene, we’re immediately drawn into his world of danger, uncertainty, and repressed desire.

Before starting his day, he stares into nothingness from his bed, looking depressed and encumbered. When he goes to the bathroom, he sets a picture up on the sink of a red-clad diva. It’s clear there’s a longing in him to express himself in similar ways, but suddenly there’s a domineering pounding at the door–a sound that represents a censuring of Mohammad’s desires.  He frantically hides the picture and opens the door to the other laborers.

He resignedly lumbers to his new job as the operator of one of the tallest and most dangerous cranes in Lebanon. With excellent cinematography, Director Dania Bdeir succeeds in making us feel a tinge of anxiety upon first looking at the task ahead of Mohammad. And especially when he begins his climb, it’s hard not to cringe at the infinitesimal city below.

Mohammad is understandably anxiety stricken to where he can’t respond to radio calls and he requires a few drags of a cigarette to calm himself once he makes it to his perch. What follows is simultaneously unexpected and thought provoking.

When Mohammad settles in, he finds a sense of freedom in the solitude of his new heights, which he wouldn’t have anticipated. Warsha eases the viewer from the experience of anxiety to freedom, with the two often being intermixed. It shows us how one’s inner world can be vibrant and rich, and also defy the oppressive norms of one’s culture.

While Warsha is accessible to a fairly diverse audience, it may be more rewarding for a viewer who knows a little about the culture of Lebanon and the Syrian Civil War. The film tackles gender norms, oppression, and capitalism within this context. But this is not a truly negative aspect of the film; it is merely a note to the viewer that understanding the social politics of the country on a basic level might be a prerequisite for appreciating this film.

Importantly, Bdeir focuses on the treatment of undocumented construction workers who are often underpaid and whose living standards are subpar–in addition to other restrictions on gender expression and sexuality. As stated above, it helps to understand this plight to get truly invested in Mohammad’s narrative.

Khansa’s acting is subtle and believable, making us see him as a real, multifaceted person. His exquisite portrayal is aided by the visuals in this film, including camera angles and color. When Mohammad is among other workers there’s a homogeneous color to the film, making Mohammad appear to be simply a worker among workers rather than an individual. This uniformity transitions into more stark color contrasts as Mohammad begins and accomplishes his ascent.

The low angle shots and aerial views also make us feel the weight and breadth of Mohammad’s undertaking. It takes the task from a job to a journey and we easily put ourselves in his place during the process.

When his inner world breaks through, the film takes a 180 turn and lets vivacious imagery of his aerial world supplant the tepid colors on the ground.

Although the subject matter of this Sundance short seems very specific, there are universal messages that can be drawn from it. One of which is that the path to freedom can be fear-inducing but ultimately lucrative. Meanwhile, it also makes us think about the layers of one’s identity and how forms of expression are unique and dependent on context.

Often it is said that identity is formed through our interactions with others, but Warsha tells us that there’s something deep within us that’s innate and can come to fruition by climbing far outside our social environment.