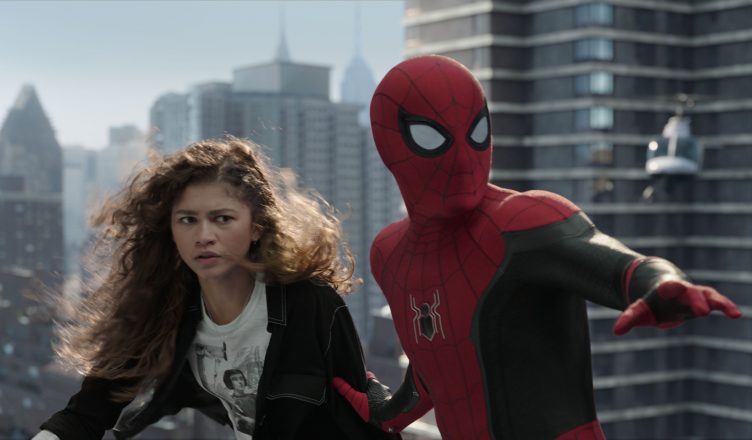 For the first time in the cinematic history of Spider-Man, our friendly neighborhood hero’s identity is revealed, bringing his Super Hero responsibilities into conflict with his normal life and putting those he cares about most at risk. When he enlists Doctor Strange’s help to restore his secret, the spell tears a hole in their world, releasing the most powerful villains who’ve ever fought a Spider-Man in any universe. Now, Peter will have to overcome his greatest challenge yet, which will not only forever alter his own future but the future of the Multiverse.

Spider-Man: No Way Home wasted very little time in getting audience set for an action packed ride. The fight scenes were jaw dropping and exhilarating. I felt like I was watching a WWE wrestling match as one of Spider-Man’s villains slammed him through a building. Of all the Spider-Man films to date, Spider-Man: No Way Home probably had the most crowd pleasing action scenes. The final battle was just pure fun to watch as Spider-Man confronted his greatest challenges. Best of all, I loved how this film utilized Spider-Man’s abilities. You could see much of that in the usage of his webbing and spider-senses. Often times, it felt like you were playing a Spider-Man video game with so many of the unique Spidey moves that were being pulled off. 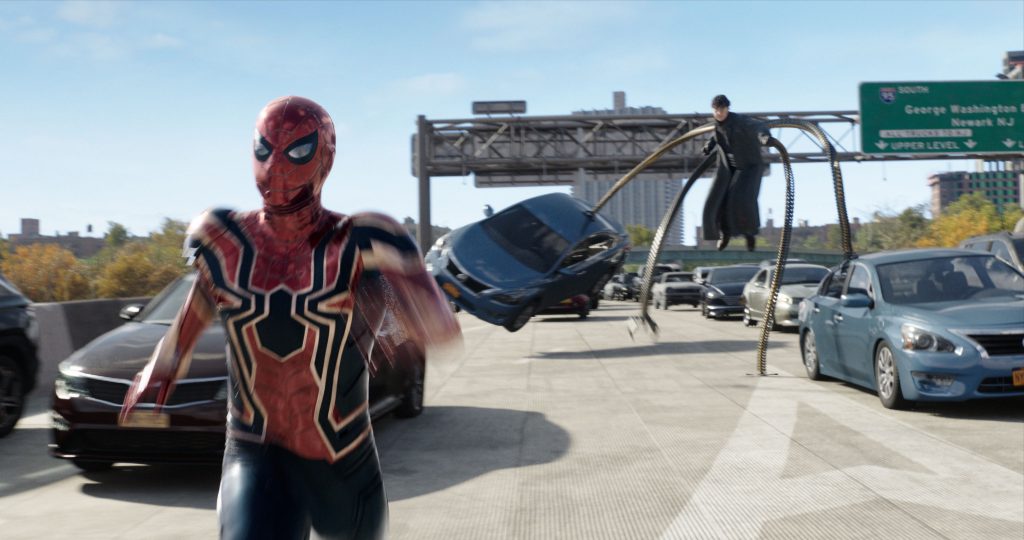 The fight scenes weren’t the only sight to see in Spider-Man: No Way Home. The mixture of both technology and magic were visually stunning. Sure, we’ve seen Spidey have his Stark tech and nanotechnology. However, with the inclusion of Doctor Strange and magic into the mix, this took things to a whole new level. When Spidey travels to that magical place with Doctor Strange, I was captivated with the special effects we got to see. In my second viewing of the film, I saw this in 3D, and it made the visuals that much better. 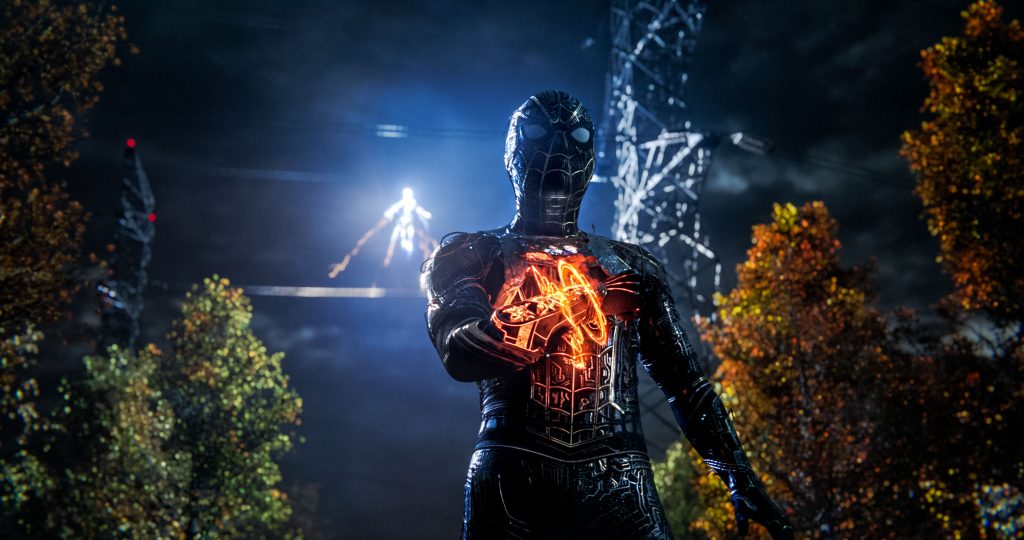 Before anyone thinks that this film is just full of wall crawling and punching bad guys, there’s a heavy dose of drama to experience as well. While we’ve seen Tom Holland’s Spider-Man face some obstacles in the past, this film has him going through his biggest challenge yet. I’ll admit, that certain moment in the film will have everyone in their feelings. It certainly pulled at the heart strings for sure. Director Jon Watts did a marvelous job at controlling the pacing of the film; especially during these more dramatic moments. He allowed for the audience to truly feel the weight of the situations through the character and the moment. I also appreciated the cinematography and how it enhanced those emotional scenes. The imagery of Spidey watching the news, in the rain, after dealing with his situation is a scene I’ll never forget. 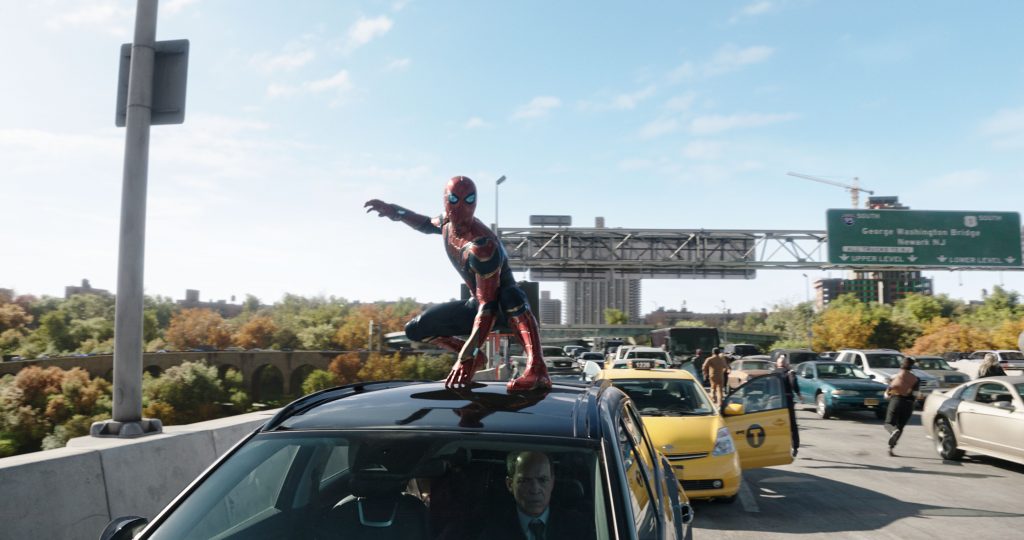 One of the strongest elements for Spider-Man: No Way Home is the character development for Peter Parker. This movie allowed us to explore of the quintessential themes that have made Spider-Man one of the most relatable characters of all time. While it may have initially seemed frustrating to see Parker go through his naivete, it was also crucial to his maturation in becoming a hero. Juggling between the ideas of what’s moral and personal sacrifice were two themes that this film handled quite well. 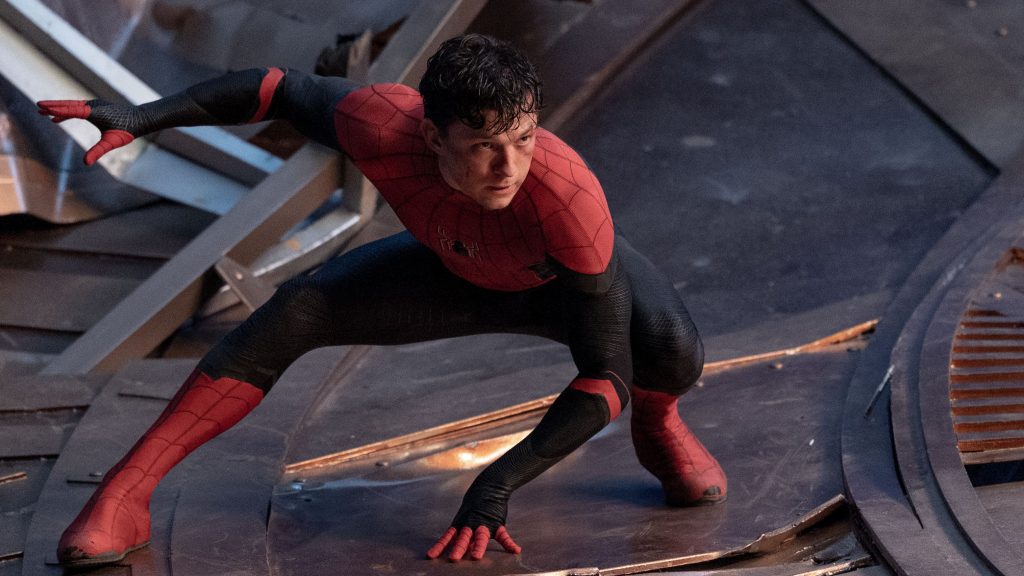 Of course, Spider-Man: No Way Home couldn’t have been as enjoyable as it was without some solid performances from the cast. Tom Holland put his acting chops on display as Peter Parker. He was entirely believable in his dramatic and humorous scenes. He’s become so good that you really do believe him to be Peter Parker. While the rest of the supporting cast were good, it was Willem Defoe that seemed like the real scene stealer. He certainly has some of the most memorable scenes in the film without question. 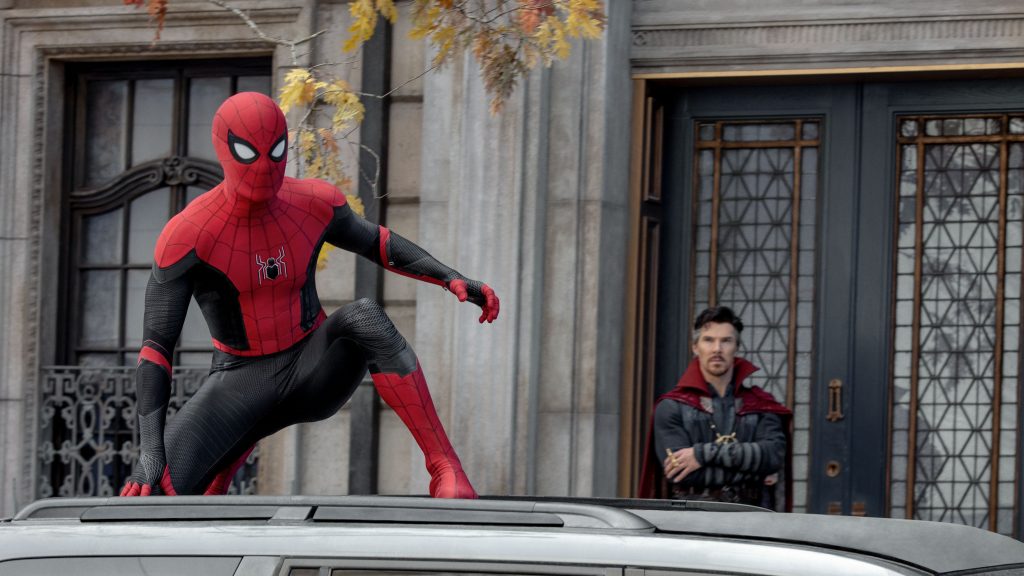 Last but not least, probably some of the most fun things about Spider-Man: No Way Home are all the fun references and surprise cameos. The level of fan service is gratifying for long time Spider-Man fans mainly due to the characters and jokes that appear in the film. Speaking of which, the dialogue in this movie was hilarious at times. Jamie Foxx’s character made reference to who he thought Spider-Man was, and it was pure hilarity. There’s a lot for Spider-Man fans to enjoy one way or another.

One minor knock against Spider-Man: No Way Home could be in the very thing that makes it great; the nostalgia. Despite this probably not being an issue for dedicated Spider-Man fans, a lot of the references to the older movies may not work for everyone. This film does bank on the nostalgia factor pretty heavily from beginning to end. If you haven’t watched the early 2000 Spider-Man movies, and the rest to date, then it can feel as though this film takes too much time with some of its jokes and callbacks. 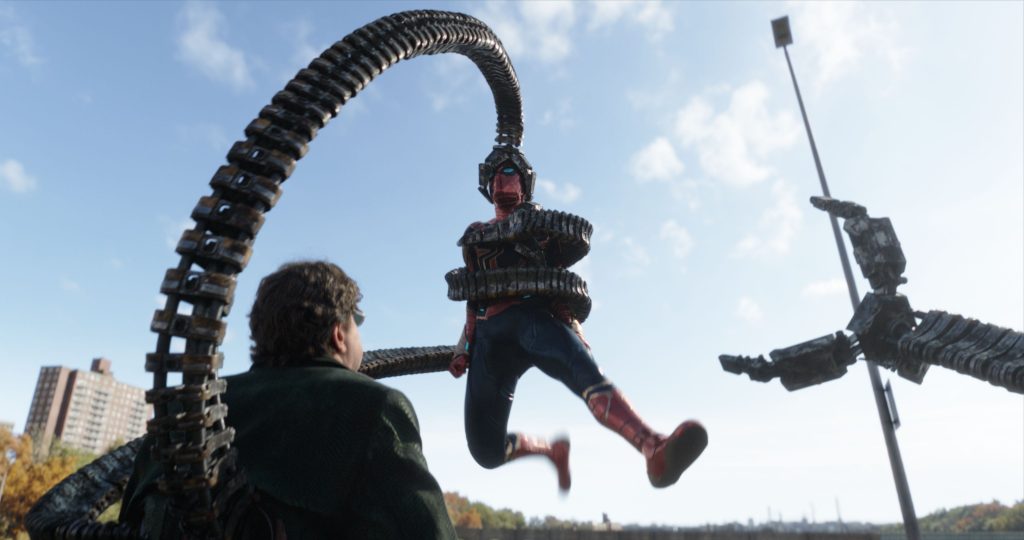 There’s a scene, for example, where Peter Parker is referencing his back pains. The scene was humorous for what it was, but it really didn’t add anything to the story. Moments like that are scenes that should’ve been deleted and saved for the “Extras” feature when the movie becomes available for home viewings. I’ll admit that as a Spider-Man fan, the jokes and callbacks didn’t bother me as much, but I can see how they could be an issue if the only Spider-Man movies you’ve seen were the MCU ones alone.

Spider-Man: No Way Home was a thrill seeking ride that is full of heart and everything we love in superhero movies. It taps into the essence of what makes Spider-Man the hero he was created to be. This was an exceptionally well balanced movie that capped a perfect ending of a trilogy. This is easily a top 3 Spider-Man movie of all time sharing the same space as Spider-Man 2 (2004) and Spider-Man: Into the Spider-Verse (2018). 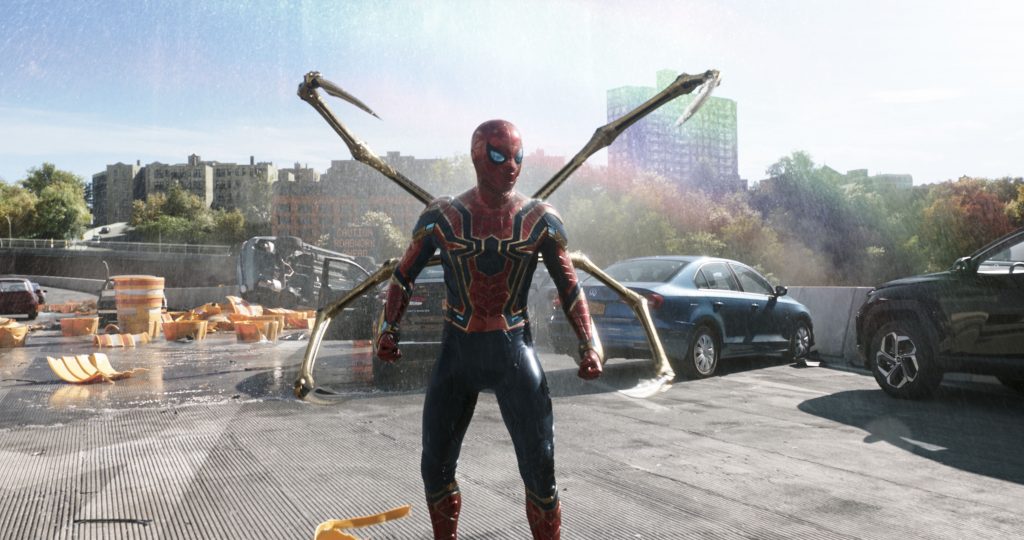 I had the chance to watch this movie for a second time, and I was impressed with how well it held up. All of the jokes still landed, and the fight scenes literally had me at the edge of my seat. Best of all, Spider-Man: No Way Home is a legit crowd-pleaser. The cheers from the audience at key moments made the moviegoing experience that much better. If you happen to be one of the 10 people in the world who still hasn’t seen this movie, please hurry to your local theater as soon as you can. Spider-Man: No Way Home is an absolute must watch. 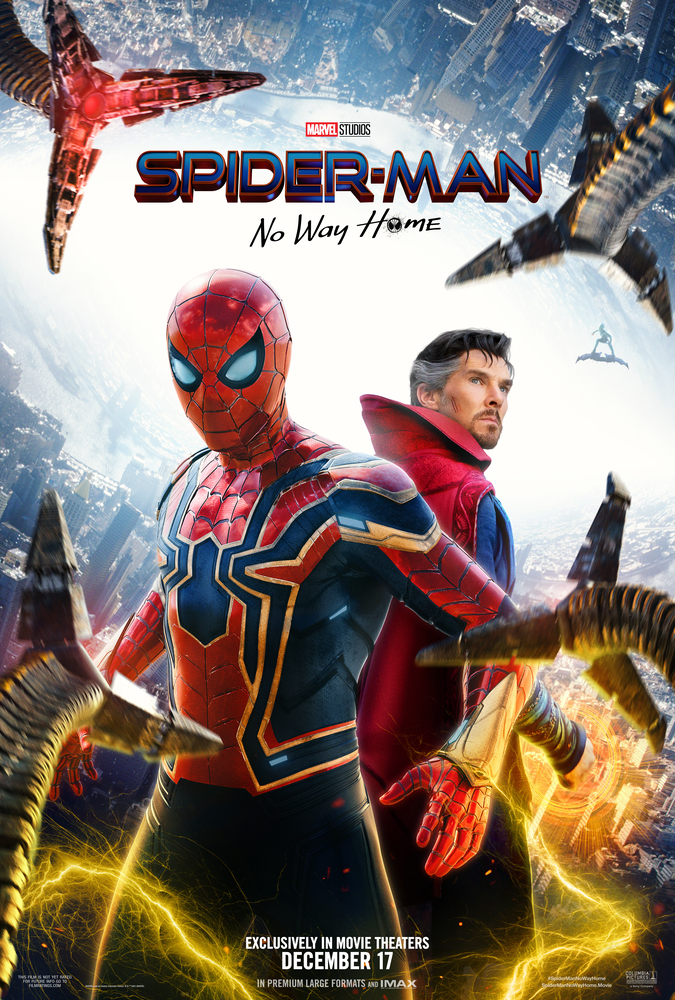