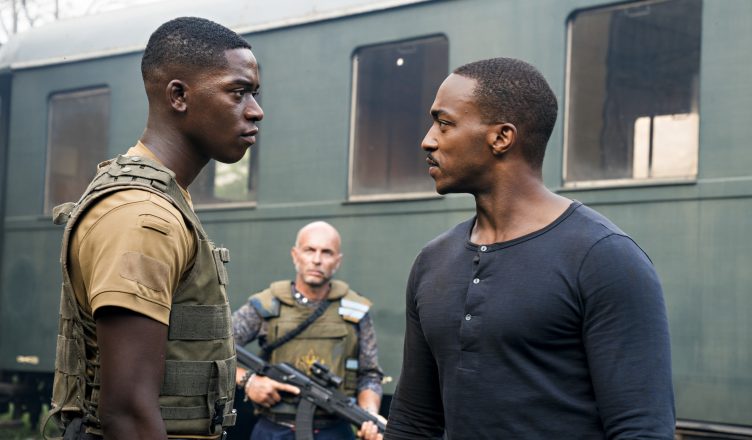 Outside The Wire follows a drone pilot, Lt. Harp, who is sent to experience combat training, only to find that his commanding officer is an android officer. Also, the android recruits him on a mission to stop a warlord from starting a nuclear war.

Synopsis: In the near future, a drone pilot sent into a war zone finds himself paired with a top-secret android officer on a mission to stop a nuclear attack.

Through a story set in 2036, where robots patrol conflict zones (and make preemptive decisions), Outside The Wire, tries to foresee a war-ridden future, which has further delved into more chaos. Outside The Wire nobly tries to convey an anti-war sentiment the film depicts the aftermath of a war that affects most of the general population. The world around us has plunged into chaos.  The general population tends to suffer. Throughout Outside the Wire there are wars on terrorism, civil conflicts, and conflicts based on religious differences that are disastrous for non-combatants.

Director Mikael Håfström creates a visually attractive film, which is powered by some strong acting performances from both Mackie and Damon Idris. Damon Idris makes a really strong impression and seems like a remarkable actor to watch out for in the future. Outside The Wire has fantastic production design and amazing sound effects, which serve the purpose of a military-action-film. The film’s action combines gun battles, hand-to-hand combat, and great martial arts stunts.

Mikael Håfström also creates this entire scenario through the point of view of Lt. Harp. Lieutenant Harp  was a non-combatant drone pilot, but witnesses the horrors of war first hand. Outside the Wire explores the impression of watching all those sequences and the effects on the pilot. Håfström shows that the aftermath, the collateral damage and the distortion of civil life first hand, delving into the emotional and psychological aspects of these conflicts.

The idea of conveying an anti-war message through hardcore action film is where Outside The Wire fails to achieve originality. Given the number of similar action-thrillers including Extraction and The Old Guard makes Outside The Wire stale in its genre. The film tries to put out a message against the regular interference of supreme political powers in overseas conflicts. These actions devastate the population and infrastructure of those places, while also ripping those people of their right to freedom. However, Outside The Wire just couldn’t do justice to this purpose as it keeps shifting between being a political film and being an action film.

Moreover, the film lacks in the character development of the supporting cast. Emily Beecham portrays Sofia, a resistance leader, representing the rising tension and rage among the general public of these territories stuck between two warring parties as collaterals. However, her character seems to be incomplete as she goes off-screen without a proper conclusion and the film fails to do justice to her representation. It will frustrate you to great extent.

The ending, that shifts from the greater message to the personal battles of Harp’s conscience leads to bigger confusion and dissatisfaction. The film’s biggest issue is that it tries to mix up two different genres. Trying to depict war, the film never gets off two protagonists and stays on their personal conflict and individual battles. The issue it is supposed to address gets brushed off somewhere in between there. Moreover, the film tries to do all that in a short run-time; the fast-paced storytelling here, works against the film. And poor character development of the supporting cast further diminishes the film’s impact.

Outside The Wire is a watchable film given that there isn’t a lot on Netflix to watch at the moment. The film starts off with a fine epilogue, but as the camera travels through a war-weary Ukraine, the film loses track of its purpose and stumbles by the end. Though Anthony Mackie’s action sequences keep the thrill alive throughout the run time, it doesn’t have too much entertainment to provide, unless you find solace in the fact that the film is Mikael Håfström’s decent attempt, worthy of appreciation for at least once. For its action and performances, the film shall gather a lot of attention from viewers, as well as for addressing the greatest political concern every global citizen shall be aware of. However, besides that Outside The Wire loses its impact quite easily.

View all posts by Abhishek Sharma →