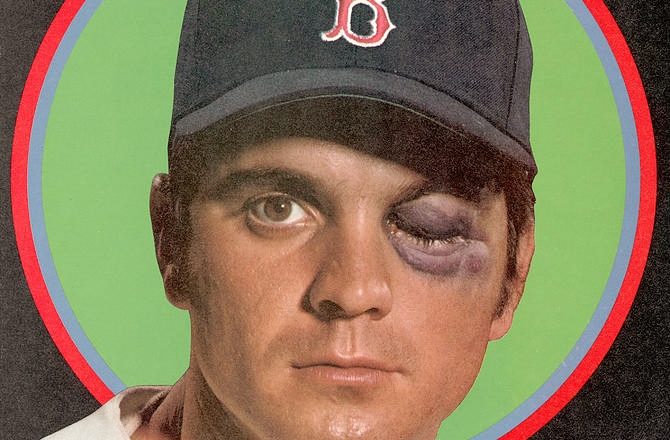 Tony Conigliaro was a big league baseball legend in the making. A Boston schoolboy sensation, Conigliaro became the youngest player ever to lead the American League in home runs at 20, and in 1967 laid claim to being the league’s fastest to amass 100 total homers as a 22-year-old slugger, all while starring for his beloved hometown heroes, the Red Sox.   Later in that ’67 season, the ultra-talented outfielder was struck square in the face with a searing fastball, blinding his left eye for life. He missed playing for the Sox in the World Series that season, and would sit out the entire next year, as well.

Miraculously, Conigliaro, with one good eye, came back to play ball again in 1969, swatting 56 home runs over the next two campaigns, including leading the Junior Circuit once again with 36 round-trippers in 1970. Though his career would fizzle out after a trade to the California Angels in ’71, “Tony C” had completed a career resurrection rarely witnessed before or since in professional sports.

Conigliaro passed in 1990, but his legacy lives on in the hearts of baseball fans everywhere, as fondly chronicled in the new documentary “25” (the late player’s uniform number). I spoke with filmmaker, and huge “Tony C” fan, John Ippoliti.

I recall Tony Conigliaro as a kid.  For his abundant talent.  And for what c/should have been.  What was the impetus for you personally to produce a documentary about “Tony C”?

I was enamored with the Red Sox as a pre teen growing up in Leominster, MA. My father incessantly talked about his three favorite athletes… Rocky Marciano, Cassius Clay soon to be Muhammad Ali and Tony Conigliaro. Years later I became best friends with his teammate Rico Petrocelli and heard countless stories about Tony C and his admirable work ethic and character. This documentary had to be told to bring his legacy to the masses. I feel strongly that this documentary will revive an opportunity for Number 25 to be retired by the Boston Red Sox.

There are no voice clips of Tony Conigliaro in “25”.  Why is this?

The quality of the footage with Tony speaking was not suitable for me to inject into the film. This film was shot and produced on a “O” budget so attaining licensed clips were not an option. As fate would have it, we just received clear footage of Howard Cosell interviewing Tony C and it will be added soon.

What is the legacy of Tony Conigliaro in your opinion, John?  Do you believe he is being forgotten by younger generations, even in his hometown of Boston?

I was careful and forward to strongly imply that Number 25 should be a retired number at Fenway Park. The younger generation that is unaware of the legend of Tony C needs to understand and digest this man was beyond extraordinary and hopefully many will now become aware.

“25” premieres and runs through September 27 as part of the Boston Film Festival. Virtual tickets are accessible at http://bostonfilmfestival.org

Tony Conigliaro was a big league baseball legend in the making. A Boston schoolboy sensation, Conigliaro became the youngest player ever to lead the American League in home runs at 20…