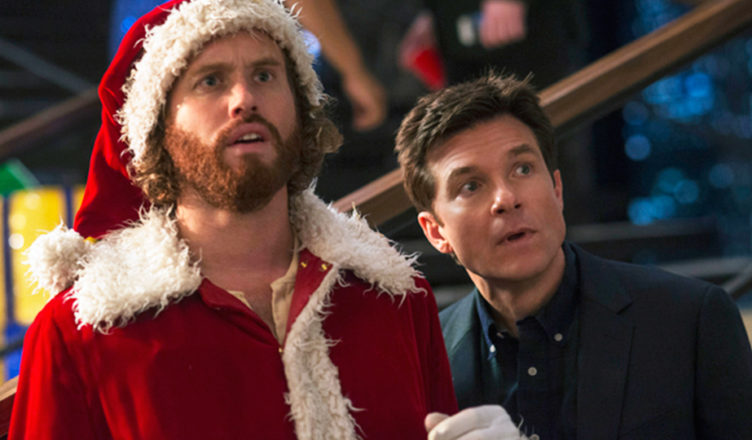 Synopsis: Clay’s days of being the director of his office are jeopardized when his CEO sister threaten’s to shut down his branch.

Gone are the days where December would be flooded with holiday themed movies. Now December brings us the annual Star Wars movie or another big budget hit. This holiday season all the hope rests with Office Christmas Party, the seemingly only holiday and Christmas themed movie. So how does it fare? It’s a whole lot of fun. A talented cast lead by Jason Bateman and Jennifer Aniston brings on all the shenanigans you can handle.

Bateman plays the Chief Technical Officer of a company that’s mainly in charge of helping out his laidback buddy and office head, Clay (T.J. Miller). Business is going downwards and the boost the company morale and land a prime client they decide to throw an epic party, only to be roadblocked by the other CEO, Clay’s sister, Carol (Jennifer Aniston).

This isn’t the first time directors Josh Gordon and Will Speck did a movie with Jason Bateman and Jennifer Aniston (The Switch), and it shows that they clearly know how to use the best of Bateman and Aniston’s comedic strengths. The cast is the driving force of the movie. Not only do you have top names like Bateman and Aniston, but they are impressively surrounded by stellar comedic performers. Among the supporting actors you have T.J. Miller, Olivia Munn, Kate McKinnon, Jillian Bell, Rob Corddry, Vanessa Bayer and Courtney B. Vance. That’s a really nice group of polished comedic actors, and it pays off on-screen. All these very good comedian actors don’t just show up for a cameo, but they each have a particular and defined character that plays an important part in the overall aspect of the story. That’s hard to do. This is a great ensemble, where even a big name talent like Aniston and Bateman don’t overshadow.

The movie feels like the office themed version of The Hangover. It’s raunchy, outrageous and hilarious. The pacing is key to the comedy. Things move fairly quickly, but not fast enough to leave you confused. The plot is pretty straightforward and the movie doesn’t outthink it’s viewer. Movies of this genre have a tendency to focus on the gags and throw them aimlessly, but the gags in this movie were well positioned and had a payoff each time.

As a Chicagoan I loved the use of Chicago in the movie. The film is set in Chicago and the filmmakers make sure you are aware of it. The exterior shots get the best out of the city’s look during holiday season. The Michigan Avenue Bridge (DuSable Bridge) plays a crucial part in the movie. They even took it a step further and brought on Chicago Bulls star Jimmy Butler to make a cameo in the movie. Nice touch. There have been many Christmas themed movies that have featured Chicago heavily, such as Home Alone, Surviving Christmas, Christmas Vacation, Christmas with the Kranks, Uncle Buck and now Office Christmas Party. Christmas movies and Chicago are a thing, and Chicagoans can relate that.

On a side note, I really liked the relationship between Bateman and Munn’s characters. They had the unspoken office attraction that gets slowly unveiled during the course of the movie. It feels pretty authentic and the development of it is a nice touch in a otherwise wild and rowdy movie. If Kate McKinnon got praise for the character work in Ghostbusters, she was that much better playing the neurotic HR manager Mary. McKinnon is ridiculously good at playing strange characters that are endearing. She nails it in all her scenes.

I didn’t quite believe in the Carol character. She was a bit over the top and her hatred for her brother and every human around her wasn’t warranted. Like what happened to this woman to make her so evil? The character could have been toned down and still be considered the villain.

The backstories for the characters and setting weren’t elaborated on much. It would have been helpful if there was more backstory mention on the father who handed down the company to his kids and why Clay was such a favorite. Besides her desire for control of the company, why did Carol hold such disdain towards Clay? What’s in their history that caused the major rift? Heck, I wanted to know more about the company itself. What sort of company is this? I know I’m nitpicking, but these are somewhat basic spaces that need to be filled.

Office Christmas Party lives up to its premise. It’s a fun and entertaining ride. It has a Christmas feel and look to it, so it’s definitely a Christmas movie. The cast is utilized very well. Bateman fans such as myself can expect a Bateman-esque performance and movie, which is a good thing. The movie is outrageous with over-the-top craziness that had me bursting out laughing. It’s a lot of fun with great talent. This is a Christmas party you can’t miss.