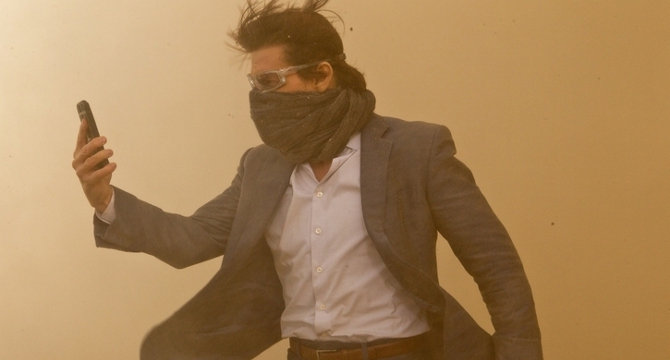 Synopsis: The President of the United States declares Ghost Protocol, which effectively disavows the entire IMF. Blamed for the bombing of the Moscow Kremlim, it’s up to Ethan Hunt and his makeshift crew to find out who’s responsible and stop them from creating a disaster of nuclear proportions. Mission: Impossible – Ghost Protocol is a 2011 action spy film, starring Tom Cruise, Jeremy Renner, Simon Pegg and Paula Patton. The film is written by André Nemec and Josh Appelbaum and is directed by Brad Bird.

Review: Mission: Impossible – Ghost Protocol is the fourth installment in the Mission: Impossible series that initially began in 1996. Based on the television series of the same name, Ghost Protocol also brings Brad Bird’s directorial debut for a live-action film. An Academy Award winner, a notable screenwriter, voice actor, animator and director, Bird’s credentials are indeed that of acclaim. Some of his more familiar films to which he has written and directed include The Iron Giant (1999), The Incredibles (2004) and Ratatouille (2007). Much like Mission: Impossible III was the directorial debut for J.J. Abrams, with Bird’s attachment it became a wonder what audiences could expect with Ghost Protocol.

It released exclusively in IMAX theatres for the first five days on December 16th, with a complete wide release in regular theatres on December 21st. And with good reason, as Ghost Protocol might perhaps be the one film you must (possibly should) see in IMAX.

With the recent re-boom of 3D movies it’s almost become an expectation to see companies taking advantage or abusing the 3D moniker. (Depending how you look 3D.) So it’s always curious when a director insists how a film should be shot and captured on screen.

“When we were first looking at the image of Tom climbing the Burj, in the long shots we could not only see the traffic in the reflections when he presses down on the glass… But you actually saw the glass warp slightly because of the pressure of his hand. You would never see that in 35mm. The fact that the screen fills your vision and is super sharp seems more life-like.” – Brad Bird, regarding filming with the IMAX format.

While the film is only partially shot with IMAX cameras, it constitutes approximately up to 30 minutes of Ghost Protocol’s 132 minute runtime. Yes, it is fairly long movie. But it’s these up to 30 minutes which effectively define the artistry of action in the latest Mission: Impossible movie. Due to the brighter and higher image quality of the IMAX format, the audience gets to see the purposeful and subtle details on an almost visceral nature. Tom Cruise scaling the Burj becomes vertigo inducing as the camera pans away, above and below in an almost frightening manner. It’s crazy, but it’s also the magic of movie making.

However it’s these types of scenes and the action in general throughout Ghost Protocol which makes this fourth installment so memorable. Bird is inherently an animator first, a person who visualizes and storyboards what he sees or describes in his mind with an exact precision. As such the action scenes themselves don’t have that normal predictability but more of an intentional characterization. So how he chooses to control, morph and effectively direct the film in its entirety from a cinematography standpoint is great to see. It’s tense when it needs to be, it’s free flowing when it’s necessary, it’s loose yet exact in the down moments, it’s easy to follow, unexpected but above all else – simply fun for the audience.

Ghost Protocol’s plot is also straight forward, cardboard thin in some ways. While there are veiled layers of sub-plot going on in the background which eventually get resolved throughout the film. The overall storyline revolves around the need to stop villain Cobalt, played by Michael Nyquist (Millenium Series, 2009) who is hell bent on sending the world into nuclear war based on his own vision. He’s a nut job, linked with his own shady network, a once person of interest who effectively becomes enemy number one in one fell swoop. There isn’t anything mysterious about Ghost Protocol’s villain, other than the remnants of IMF finding out who he is and stopping him. Why he’s doing it is aggregate of a generic bad guy. But in the end, does it even matter to the plotline? Some might discredit Ghost Protocol’s primary villain as a weakness compared to the series’ previous film’s Owen Davian played by Philip Seymour Hoffman.

Nyquist’s character is elusive and always chased. His biopic is played in the background, while the mission brief is explained in jot notes. That’s it and it is simple with reason.

We don’t get the normal 20-30 minutes to setup the villain’s character himself who we know is going to die at the end of the film anyway. Instead we follow Ethan Hunt (Tom Cruise), Benji Dunn (Simon Pegg), Jane Carter (Paula Patton) and get the introduction of IMF’s Secretary Chief Analyst William Brandt (Jeremy Renner). Secondary characters such as Sabine Moreau (Léa Seydoux), the French assassin and Anatoly Sidirov (Vladimir Mashkov), a Russion intelligence operative get more screen time. We watch the IMF team engage with one another, we see their own characterizations, it’s given enough time, weight and levity throughout the film to make us watch, laugh and want to follow them, seeing this particular mission through. Like a storyboard, the pacing of the action to comedy is injected well, connecting everyone and everything together. Ghost Protocol knows what it is doing and addresses even its own ridiculousness.

When Renner was attached to this film and buzz about him taking over the Bourne franchise it was curious how to see how Ghost Protocol would shape up. If by some circumstance Ghost Protocol was meant to renew or refresh the Mission: Impossible franchise overall, I think from that standpoint it was a real success. From the other perspective if Ghost Protocol was meant for Cruise to in some subtle way pass the baton off to Renner going into the future, I think that question and/or debate is still really up in the air. I don’t doubt this fourth installment will see worldwide success at the box office. It has already made up a decent portion of its budget internationally and the limited release domestically was also impressive. Call the IMAX exclusivity smart marketing.

However, monetary success aside, what Ghost Protocol did for me was open up the Mission: Impossible world of espionage even further. We saw the character of Ethan Hunt work with familiar characters in the franchise whilst introduce new ones. It was one thing I always liked about the first movie, an engaging cast (even with the Emilio Estevez early exit) and which was also touched upon in the third movie with Maggie Q and Jonathan Rhys Meyers. (Something, something second film, John Woo.) I like watching the IMF team at work. It’s fun to see and is exactly what the Mission: Impossible movies should be about. The fourth installment doesn’t underutilize its characters and in fact gives you just the right amount of them. You do want to see more, but more in the sense that yeah, I’d like to see this franchise continue. But that’s the exact question, but more specifically, how will this franchise continue on from here?

Cruise’s age becomes apparent in this film, he’s still very very capable and despite whatever he does off-screen. What he does on-screen is completely separate. You don’t have to like him as a person, as sometimes that’s reason enough to not watch a movie for some. Personally speaking I don’t care as the world of celebrity gossip is as oblivious to me as much as it is unimportant. I only watch his movies and with that in mind, I enjoy Cruise’s characterizations as an actor. There is something maniacally focused with his craft, hell when Cruise is chasing you down in a movie, I believe it. The man runs like no one else on-screen.

The point of the matter is – I don’t see how Tom Cruise can’t not – be attached to the Mission: Impossible franchise in some way. The notion is impossible, just like the name of the franchise. I can concoct scenarios of him playing the Jon Voight-esque character and has Renner act as his ‘point man’. But I have to always expect him to be attached or perhaps it’s my own expectation/want to see him back in action. However, with how each successive Mission: Impossible film takes roughly five years to come out. Again it’s easy to speculate based on timing and who eventually becomes involved.

In any event I see it more likely Cruise comes back for a fifth movie with perhaps Simon Pegg in tow, Renner not being involved at all, Ving Rhames back on the team and even more IMF crew introduced. So it becomes more of a question of what team does the impossible mission that go around. If you have an IMAX in your area, make the trip like I did, it’s rare to see blockbuster films have visual purpose but above all intent in respect to utilizing a specific film format. I do simply recommend checking Ghost Protocol out as its good popcorn entertainment.

I give Mission: Impossible – Ghost Protocol an incredibly solid 8 out of 10.