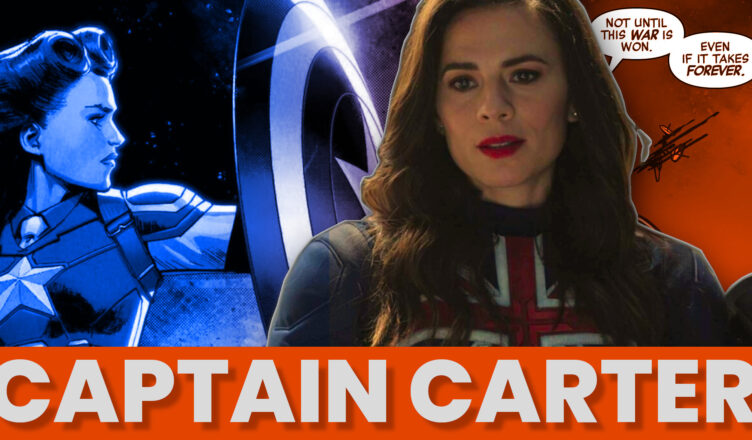 Margaret Elizabeth Carter is a fictional character appearing in American comic books published by Marvel Comics. In the past she was often just a supporting character in Captain America books but that all changed in recent years. Margaret “Peggy” Carter was created by Stan Lee and artist Jack Kirby and had her initial debut in Tales of Suspense #75. The first time we see Peggy she’s shown as a World War II love interest of Steve Rogers in flashback sequences. Just like in the MCU she is shown to be the relative of Captain America’s modern-day significant other, Sharon Carter.

Hayley Atwell portrays Peggy Carter in the MCU show What IF and the recent Doctor Strange movie. We first see Hayley in the role in the underappreciated Joe Johnston movie Captain America: The First Avenger. Although that movie was a period piece based on the time of World War II, Atwell would return to the role with appearances in the Marvel One-Shot “Agent Carter”, Captain America: The Winter Soldier, the ABC television series Marvel’s Agents of S.H.I.E.L.D. and Marvel’s Agent Carter, Avengers: Age of Ultron (2015), a flashback in Ant-Man (2015), Avengers: Endgame (2019).

Fans loved the revelation that Atwell would be returning again in Marvel’s animated series ‘What If’ in which she portrays a variant version of the Peggy named Captain Carter. Fans were doubly surprised, and ecstatic, that Atwell returned again as another Variant of Captain Carter in the film Doctor Strange in the Multiverse of Madness (2022). Atwell portrays the character in live-action and is seen going toe-to-toe with the Scarlet Witch in an exciting action sequence.

Her Origin spins out of the scenes we see in Captain America: The First Avenger wherein Steve Rogers is preparing to receive the Super Soldier Serum. In the film, Peggy Carter is asked to go to the booth to watch Steve Rogers receive the super-serum. In this scene, fate intervenes and Dr. Erskine is shot and killed as Steve received the Serum. In these alternate realities, Peggy (Hayley Atwell) decides to remain in the room rather than go into the booth.