Owen Teague began his career working on TV shows such as NCIS: Los Angeles, Bones, Locke and Key, and Black Mirror. He moved over to film and secured roles in It, It Chapter II, and The Empty Man. In recent years he starred as Harold Lauder in Stephen King’s The Stand TV mini-series, in which he was excellent. He’s a star on the rise and definitely has the chops to carry a film franchise. Moving forward, he has several projects in post-production. His addition to the new Planet of the Apes film will be yet another feather in his illustrious cap. 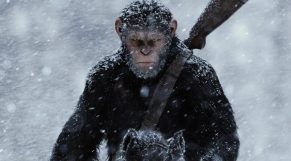 According to Deadline, Owen Teague is set to star in the newest installment of the Planet of the Apes franchise with Wes Ball directing. We don’t know much about this project but we do know they are in pre-production and are looking to start production by the end of the year. Wes Ball will pen the script for the film which has been in the works since 2019. Now that Disney owns 20th Century Fox, they have made it clear they want a new arc of the Planet of the Apes Saga in the next few years. Fans of the franchise should be happy because it looks like things are off to a good start.

Owen Teague is a fine actor and his work in The Stand was excellent. His portrayal of Harold Lauder was nothing short of inspired. He can play insane, troubled, and conflicted better than almost anyone. To be honest, that and the It franchise are the only things I have seen him in, but he always stands out. As I stated above, we know next to nothing about the next installment of the Planet of the Apes franchise and I’m also not familiar with Wes Ball’s work. If Matt Reeves was attached I would be much more excited, but for now, I think they are going for up-and-coming talent and the addition of Owen Teague is a solid move.