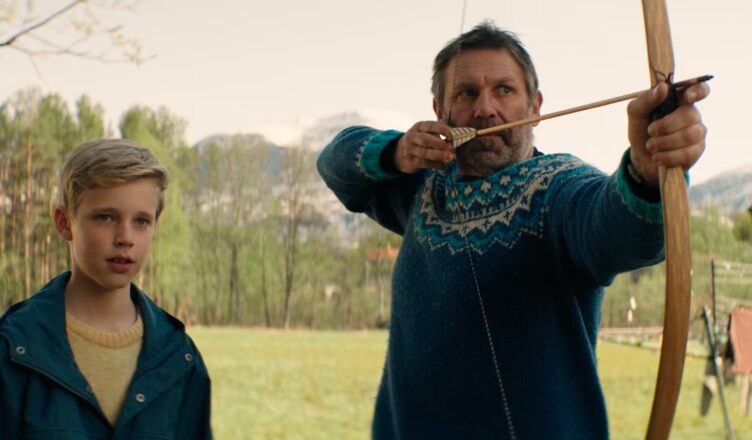 Synopsis:  When 10-year-old Oskar’s mom leave him with his grandpa to go to America, he sets up a nutty plan to cross the Atlantic Ocean in a rowboat with his new friend Levi and his short-sighted horse.

When I was a kid my best friend and I constructed a cardboard craft that we intended to launch into orbit. We lived within shouting distance of the Manned Spacecraft Center in suburban Houston and each of our dads, including my Norwegian-born pappa, Ole, were NASA engineers. We, like all of our friends and schoolmates, revered the U.S. space program. For propulsion, my buddy’s old man suggested that we partially fill clear plastic gallon jugs with water and seal them so as to generate pressure within. Then we would install these “boosters” onto the back of our rudimentary rocket, twist off the caps, and blast off to the stars. Even though I was away on a family vacation for launch day, upon return my chum regrettably reported that the operation was not a success.

Enter the Norwegian fantasy drama “Oskar’s America”. The titular character is a ten-year-old boy (Odin Eikre in a charmingly endearing performance), the son of Isabel (Marie Blokhus), a young single mother mired in substance abuse, grandson of grizzled grandpa, Helmer (Bjørn Sundquist) and enamored with the mystique of what he has come to believe America to be. That is a land in which everybody is a cowboy, gloriously riding horses upon the vast, open prairie. Not unlike the naivete inherent in my Quixotic “co-astronaut’s” and my vision of conquering the vast expanse of the heavens in our homemade composition board contraption.
Oskar is left to live with his grumpy gramps, an anti-social loner who is working on a mysterious project in the basement, whilst Isabel is away in America “on a job for a couple of weeks”.

Or so she tells him.

During this time the youngster meets a man-child named Levi (a touching turn by the late Jørgen Langhelle), who resides with his only companion in life, a diminutive equine he has christened, natch, “Horsie”. When Oskar learns that his mother has lied to him about her whereabouts, his world is shattered. Determined more than ever now to begin anew in the USA, he and Levi hatch a plan to row across the Atlantic Ocean, just as one of Levi’s ancestors had done decades ago. When Isabel learns that Oskar has gone missing from her father’s home, she sets out on a frantic search to find her son. Having successfully evaded local hostile punks and law enforcement, Oskar and Levi are just about to set sail when Isabel comes upon them at the beach.

Three lost souls have found each other.

What lies ahead for the trio is not at all certain.

Wherever, and whatever, the journey, it is destined to be traveled forever as one.

“Oskar’s America” is available for rent and purchase on Amazon Prime Video.

In the Norwegian drama “Oskar’s America” the titular character is a ten-year-old boy (Odin Eikre in a charmingly endearing performance), the son of Isabel, a young single mother mired in substance abuse, grandson of a grizzled grandpa, and enamored with the mystique of what he has come to believe the land of the Red, White and Blue to be.