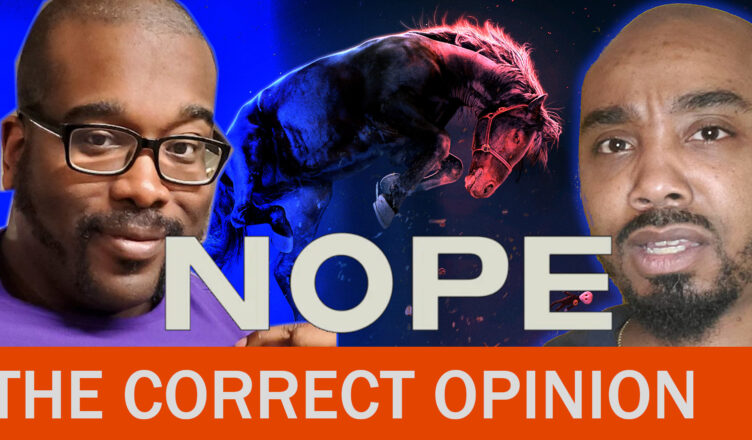 This week we’re diving into the arrival of Jordan Peele’s Latest movie NOPE. Was this a good movie? Will this movie be loved by critics and general audiences? Is this another great entry into horror by Jordan Peele?

All this and more in this episode of The Correct Opinion.

Season 3 Episode 1 of The Correct Opinion

WRITTEN PRODUCED AND DIRECTED BY

Oscar® winner JORDAN PEELE disrupted and redefined modern horror with Get Out in 2017 and then Us in 2019. Now, he reimagines the summer movie with the expansive new horror epic, Nope, a dark pop nightmare of uncanny science fiction and complex social thriller that unpacks the seeds of violence, risk and opportunism that are inseparable from the romanticized history of the American West … and from show business itself.

The film reunites Peele with Oscar® winner DANIEL KALUUYA (Get Out, Judas and the Black Messiah), who is joined by KEKE PALMER (Hustlers, Alice) and Oscar® nominee STEVEN YEUN (Minari, Okja) as residents in a lonely gulch of inland California who bear witness to an uncanny and chilling discovery.

Nope is situated just outside of Los Angeles, in Southern California’s arid and rambling Santa Clarita Valley, where siblings OJ Haywood (Daniel Kaluuya) and Emerald Haywood (Keke Palmer), have inherited a horse ranch from their industry-legend father, Otis Haywood Sr. (Emmy winner KEITH DAVID; 21 Bridges, Crash), carrying the torch of his craft as animal wranglers for film and television. It’s a tough business, and despite their skills and the artistry of their profession, OJ and Emerald face financial challenges and the heartbreak inherent to a trade where livestock is the talent. Adjacent to the Haywood ranch sits Jupiter’s Claim, a family-fun theme park and petting zoo predicated on the white-washed history and aesthetics of the California Gold Rush, owned and operated with evangelical pride by Ricky “Jupe” Park (Steven Yeun), a former child star who is saddled with a tabloid-tragic backstory that he has spent a lifetime trying to escape.

OJ and Emerald begin observing unexplained phenomena on their vast ranch that leads them down an obsessive rabbit hole—plotting attempts to capture the mystery on camera. The hijinks of their quest for documentation, through increasingly elaborate and dangerous set-ups, puts at risk the only thing they truly have: the hard-earned business of their late John Henry-esque father, who has left them in his long shadow. Things escalate, as the siblings enlist the expert help of Fry’s Electronics store employee Angel Torres (BRANDON PEREA; The OA, American Insurrection), and acclaimed cinematographer Antlers Holst (MICHAEL WINCOTT; Hitchcock, Westworld), who is on the cusp of retirement. As their efforts, and hubris, cross a point-of-no-return, ratcheting the stakes to terrifying consequences, our heroes are drawn straight into the eye of an irreversible storm. The result is an expansive horror-spectacle with an intimate and emotionally complex core.

Nope is written, produced and directed by JORDAN PEELE and produced by IAN COOPER p.g.a. (Us, Candyman) for Monkeypaw Productions. The film’s executive producers are ROBERT GRAF (Bombshell, No Country for Old Men, True Grit) and WIN ROSENFELD (Hunters, BlacKkKlansman).