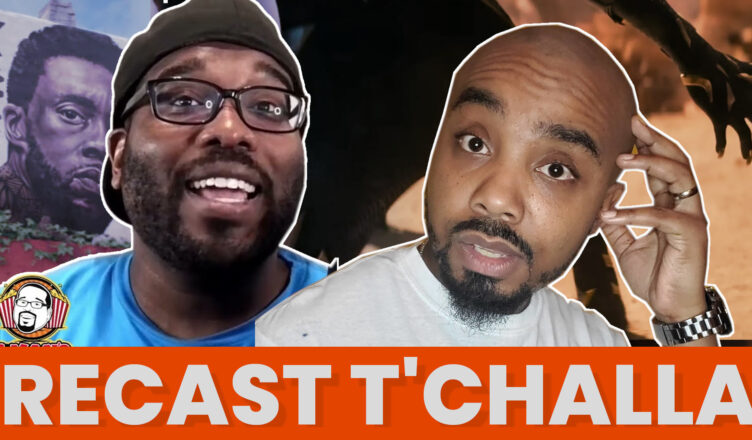 Hosts Anthony Whyte and Emmanuel “E-man” Noisette’s reaction to the news that #RecastTchalla is trending! The Recast T’Challa change.org petition was created by E-Man right here on this show! Check out our reaction and explanation as to what Recast T’challa IS and what it ISN’T.

In Marvel Studios’ “Black Panther: Wakanda Forever,” Queen Ramonda (Angela Bassett), Shuri (Letitia Wright), M’Baku (Winston Duke), Okoye (Danai Gurira), and the Dora Milaje (including Florence Kasumba), fight to protect their nation from intervening world powers in the wake of King T’Challa’s death. As the Wakandans strive to embrace their next chapter, the heroes must band together with the help of War Dog Nakia (Lupita Nyong’o) and Everett Ross (Martin Freeman) and forge a new path for the kingdom of Wakanda. Introducing Tenoch Huerta as Namor, king of a hidden undersea nation, the film also stars Dominique Thorne, Michaela Coel, Mabel Cadena, and Alex Livanalli.

In August of 2020, the world mourned the death of Chadwick Boseman. To many, he was known for his on-screen role of Black Panther in the Marvel Universe. While his character of T’Challa was adored by fans, there have been rumors that Marvel will kill off his character in the new movie and for good.

This is a call for the President of Marvel Studios Kevin Feige, Co-President Louis D’Esposito, and Writer/Director Ryan Coogler to reconsider their decision, and recast the role of “T’Challa” in the Black Panther franchise. If Marvel Studios removes T’Challa, it would be at the expense of the audiences (especially Black boys and men) who saw themselves in him. That also includes the millions of fans who were inspired by the character as well.

By not recasting, it could stifle the opportunity for one of the most popular, leading Black superheroes to add on to their legacy. The #1 way to kill a legend, is to stop telling their story.

#RecastTChalla is NOT calling for an immediate recast.

The Correct Opinion is the OFFICIAL Podcast of The Movie Blog.