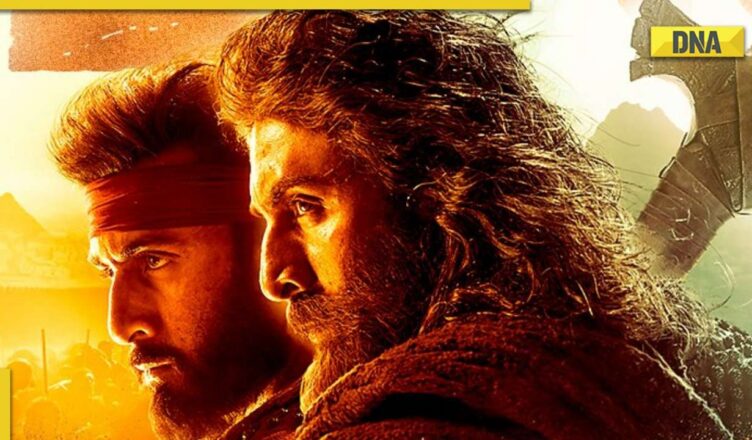 Written by Neelesh Mishra and Khila Bisht, produced by Aditya Chopra, and directed by Karan Malhotra; Shamshera is an epic period action-adventure drama which stars Ranbir Kapoor in a dual role, and Sanjay Dutt as the lead antagonist. Set in the year 1871, the story follows the legend of a dacoit tribe known as the Khamerans and their fight for independence against the British rule in India.

The story revolves back to the year 1871, when the British East India Company ruled India. The Khamerans was a warrior tribal group, basically, dacoits, residing in the fictitious city of Kaza. The leader of the tribe was Shamshera (Ranbir Kapoor). Shamshera was a fearless warrior who had killed many Britishers. The Khameran tribe ruled the area under his leadership. The British government wanted to capture the Khamerans and had appointed police inspector Shuddh Singh (Sanjay Dutt) for the purpose.

Shuddh Singh, as cunning as he was, tricked the Khamerans by luring them into a trap. He told the tribesmen that the Britishers would be granting them freedom soon, and the government had found a new place where all the Khamerans could reside in peace. In return for their freedom, Shamshera had to surrender to the British government. As Shamshera agreed to surrender, Shuddh Singh lured the Khamerans into a cave. As soon as the tribesmen entered the cave, the entrance closed and they were trapped.

In return for the release of the Khameran tribesmen, Shamshera was asked to bring 10,000 gold coins for the British officer who was holding them. As Shamshera was on his quest to bring the gold coins for the British officer, he was captured, brutally tortured, and killed by Shuddh Singh. Meanwhile, Shamshera’s wife had given birth to a son named Balli (also played by Ranbir Kapoor).

Twenty-five years later, Balli, a happy-go-lucky guy, wanted to become a police officer under the British government. However, he was made aware of the plight of the Khameran tribe who were trapped by the Britishers, and the sacrifices of his father Shamshera who got killed by Shuddh Singh in an effort to release the Khamerans.

Now, it was up to Balli to not only save the Khamerans from the Britishers but also avenge the murder of his father. In the end, Balli destroyed Shuddh Singh in a similar way Shuddh Singh had murdered his father, Shamshera. Moving forward, Balli became the new leader of the Khameran tribe which had now gained freedom from the Britishers. He kept the legend of Shamshera alive!

During the 1990s era, there was a huge revolution in Indian cinema. At that time, Bollywood was ruling the Indian film industry. If you had watched any 1990s-era Bollywood movie, you would have experienced a dramatic robust story-based script that involved action stunts, hand-to-hand combats, romance, adventure, and thrill, all in one! Shamshera, which was released on July 22, 2022, has a similar essence to the 1990s retro Indian cinema with its dramatic “all-in-one” screenplay.

As Bollywood evolved, its movies got more and more fashionable, and the retro dramatic essence got lost. Nowadays, very few Bollywood movies have a robust storyline where the lead protagonist sets out on an adventure to destroy the villains. Upon watching Shamshera, I do feel that Bollywood is striving hard to bring the 1990s cinematic experience as well as quality back into its movies, which were once thoroughly enjoyed by the audiences.

Ranbir Kapoor’s Characters In The Movie Are Unbelievable

For over a decade, Ranbir Kapoor has developed the image of a boyishly handsome guy who is for sure to romance the opposite sex in whichever movies he does. This is the first time ever in his career that he has come out with a serious and intense dual role of a dacoit leader, and his son who avenges his father’s death.

I haven’t come across Ranbir Kapoor on the big screens since the COVID-19 crisis broke out. But I must say that he has really come out with a unique dual role of a father and son in Shamshera. He has shed his usual handsome boy image and sported shabby rugged looks with messy hair and beards in both his characters of father and son in the movie. What a tremendous makeover!

Sanjay Dutt As the Antagonist Was Entertaining

Sanjay Dutt is the legendary macho man of Bollywood. I have grown up watching his movies right from the time he brought the concept of bodybuilding into the film industry. Since then, Bollywood heroes shed their chubby looks and started getting muscular and shredded for their roles in movies.

For several decades, Sanjay Dutt has portrayed himself as a romantic action hero, and during his later years as a comedian too. But I must say that his dedicated hard work deserves a tremendous applause because as he his aging, he has started getting himself involved into intense villainous roles, in KGF 2 as Adheera and now in Shamshera as Shuddh Singh! I must say that Sanjay Dutt is that entertainer whom the Bollywood industry and its fans will remember forever!

Karan Malhotra flaunts his top-notch direction as well as screenplay in Shamshera. Even if the action stunts in the movie are not top standard, still the audiences will find the screenplay entertaining as the story builds with every passing moment with the uprising of Balli following Shamshera’s death.

The action scenes in Shamshera look old-fashioned where you will come across people fighting with traditional weaponry like spears and axes, pelting stones at each other, and riding on horseback. However, Ranbir Kapoor did show some intense action moves during his fight scenes, and did some impressive mountain climbing as well.

The robust screenplay of Shamshera is filled with amazing dialogues. One dialogue from the movie goes, “Gulami Kisi Ki Acchi Nahi Hoti, Na Gairo Ki, Aur Na Hi Apno Ki” which means, “Enslavement is no good for your near and dear ones and even for strangers”. Another one goes, “Saanson Mein Tufaano Ka Deera, Nigahe Jaise Cheel Ka Pahara; Koi Rok Na Payega Ise, Jab Uthe Ye Banke Savera” meaning, “His breath contains the power of wild storms, his eyes are sharp like the eagle’s; Nobody can dare stop him when he uprises with the morning light” (depicting Shamshera’s son Balli). And an epic one, “Azaadi Tumhe Koi Deta Nahi, Azaadi Jeeti Jaati Hain” which means, “Freedom is never granted, it has to be won!” 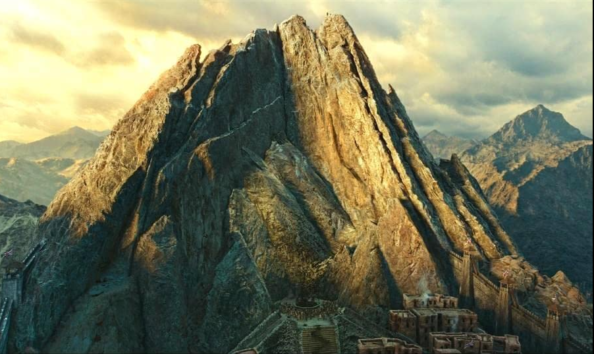 Believe me; upon watching Shamshera you would be enchanted by the scenic background landscapes. The retro sets in Shamshera comprised a massive fort which took almost two months to prepare. The background rocky desert landscapes depicting the 19th century British India coupled with high-definition wide-angled camera shots by cinematographer Anay Goswamy made the visuals fascinating.

You would be mesmerized by the visual effects in this movie for sure. Balli has an eagle and a gang of thousands of crows to help him in his quest. In the ending scene, the crows helped Balli destroy the wicked and the ruthless authoritarian Shuddh Singh. I must say, Bollywood is evolving tremendously with its new-generation cinematography.

The romantic tracks in the movie which Ranbir did with co-star Vaani Kapoor, who played Balli’s girlfriend-turned-wife Sona, were not at all appealing to the ears. But if you watch the tracks, you are sure to get enchanted by the beautiful backgrounds and landscapes which have been picturized in those. I must say, Shamshera is not just a visual masterpiece, but it happens to be a cinematic work of art as well!

A Familiar Plot Which Gets Too Predictable

What first came to your mind upon reading Shamshera’s story? Isn’t it similar to Disney’s “The Lion King” or the South Indian film industry’s “Baahubali”, where the son avenges his father’s death? This familiar concept in the storyline makes it too predictable. While watching such movies, you are already aware what will happen at the ending. This in fact, makes the audiences lose thrill. However, this “father-son vengeance” concept has been ruling the film genres for generations and even if the plot looks familiar, it is interesting enough to keep the audiences glued.

The Editing Could Have Been Better

At certain points in the movie, I felt editor Shivkumar Panicker could have used his editing scissors more judiciously. Shamshera has a 2 hour and 40 minutes long screenplay which at times may appear slow-paced where Balli has been shown being made aware of his duties towards the Khamerans and his late father Shamshera by a mystic known as Peer Baba (Ronit Roy). Also, there are certain slow-paced instances in the film when Balli was injured during his duel with Shuddh Singh and the onlookers kept chanting “Balli, get up!” for about five minutes! The climax of Shamshera is thrilling, no doubt, but it is highly stretched out to the extent that can leave some in the audiences bored.

Another thing which the editing lacks is the loudness of the background music. At times the background music in certain scenes goes so loud that you have to strain your ears to hear those amazing dialogues which I have mentioned in the previous part.

The supporting cast in Shamshera were interesting though some of their characters defied all logic. Ronit Roy played Balli’s mystic guide Peer Baba who knew everything, what was going on around the world, and what was about to happen! Upon watching his mysterious character you may wonder, how can he be so sure? Iravati Harshe played Shamshera’s wife and Balli’s mother, and her character too lacked sense. Upon watching the movie you will see Balli grown up, but his mother hasn’t aged even a bit in a span of twenty-five long years!

The lead actress Vaani Kapoor played a Kathak dancer named Sona who was Balli’s girlfriend-turned-wife. She did look good but her character doesn’t have a strong presence. Her comparatively short role just required her to be a stunning Kathak dancer and Balli’s wife who later on gave birth to his child. Supporting actors Ashutosh Rana and Saurabh Shukla looked convincing in their respective roles.

There are brutal torture scenes in Shamshera which might make the viewing experience unpleasant for most among the audiences. For instance, scenes where the Khameran tribesmen and children get tortured by the Britishers and Shamshera was tortured and killed by Shuddh Singh were disturbing to watch. I think the violent scenes in Shamshera have been inspired by KGF. Bollywood is always trying to implement the concepts of the South Indian film industry in its movies. That’s how I feel certain scenes in Shamshera depicted sheer violence.

Overall, Shamshera is a classic action-adventure masterpiece of Bollywood which has become highly underrated after its release. During the first day of its release, many theater shows got cancelled due to absence of audiences. Even several critics have downgraded the film saying that its predictable plot made it boring. I would contradict their hasty opinions on this film. I would rather say that even if the plot is predictable, it won’t let you down in terms of action, adventure, and thrill. Anyone who respects good quality cinema must watch this masterwork of the Bollywood film industry at the theaters only for a larger than life cinematic experience! 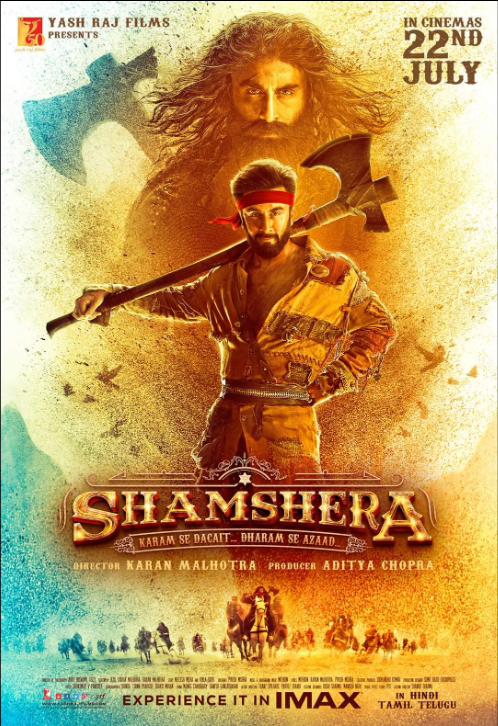