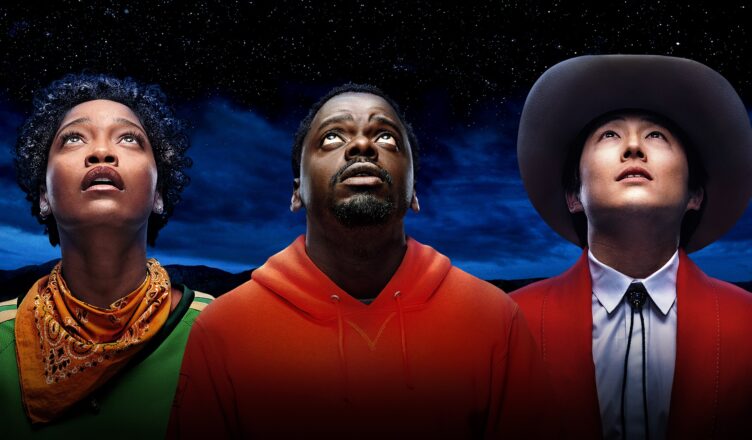 Nope is situated just outside of Los Angeles, in Southern California’s arid and rambling Santa Clarita Valley, where siblings OJ Haywood (Daniel Kaluuya) and Emerald Haywood (Keke Palmer), have inherited a horse ranch from their industry-legend father, Otis Haywood Sr. (Emmy winner KEITH DAVID; 21 Bridges, Crash), carrying the torch of his craft as animal wranglers for film and television. OJ and Emerald begin observing unexplained phenomena on their vast ranch that leads them down an obsessive rabbit hole—plotting attempts to capture the mystery on camera.

Director Jordan Peele did a masterful job of creating a level of suspense that keeps you fully engaged.  One of my favorite scenes had to be the “Barn scene,” where I immediately found myself saying, “Nope.”  Peele gets a lot of respect because he managed to tap into a real cultural sense, especially within the Black community, and our relation to horror movies. Putting Black characters in a situation and having them authentically react the same way viewers would react was genius. That tiny bit of nuance in the script and performances heightens the relatability of the movie-going experience. I loved how Peele could string viewers along without revealing too much or too quickly.

The mysterious phenomenon in Nope was fascinating and terrifying at the same time. However, what really enriched the film was the cinematography. The use of IMAX cameras was a great touch because the overhead shots of the sky only amplified the threat from above. At some points, the sky became scarier than what you thought was in the sky. I’ll also say that some of the visual effects with what we see above are truly unique and remarkable. It was really hard to take your eyes off the sky, especially given what you see in the film’s ending.

A highlight for Nope was the theme of humanity’s relation to the notion of spectacle. It was essentially the driving force of the entire movie. While it may not be as apparent on the first viewing of the film, it was undoubtedly more clear on a second viewing. The writing for Nope found a way to take that theme and center it within each of the characters in the film. I appreciated how Peele communicated that same theme from different perspectives. It definitely gave a lot of food for thought.

In my opinion, the first two acts in Nope are terrific, but the final third act didn’t stick the landing. The film spent a lot of time setting you up to care and wonder about what’s in the air, and when you finally discover what’s happening, the payoff doesn’t feel adequate. To be fair, the movie stayed more committed to its theme rather than its story. For example, in the movie Jaws, you expect the film to be about the shark and what are people going to do about that shark. If you relate Jaws to Nope, it’s more like you go in expecting to see more about the shark, but you should’ve been paying attention to how the theme affects the characters. I can’t say this is hardcore “Bad” but the misdirection can be disappointing and unsatisfying.

Jordan Peele has created another thought-provoking, suspenseful film that falls victim to its own artistic ambition. The film looks beautiful in so many ways. The acting performances were okay, but not great. Although, I’d say Keke Palmer’s performance stood out the most.  The movie is intentionally multi-layered but not in a conventional way. It sells itself to be a horror, but it’s more like a social commentary relying on the theme of spectacle. It certainly checks the boxes of being innovative and technically sound. Jordan Peele takes us on a fun ride with Nope, but the final destination was a bit of a letdown. For some, it may even be a head-scratcher.

The most important thing when watching Nope is to allow this movie to stand on its own. The closest comparison to this film would be a mixture of Jaws meets Close Encounters of the Third Kind. If you go in expecting the next coming of Get Out, then you will more than likely be disappointed. Although Get Out was far too high of a bar to beat, to be honest. Personally, I still have Get Out on top, Us in second place, and Nope coming in my rankings of Peele’s movies.  Nevertheless, because of the film’s beautiful camera work and suspenseful nature, feel free to see Nope on the biggest screen in theaters. 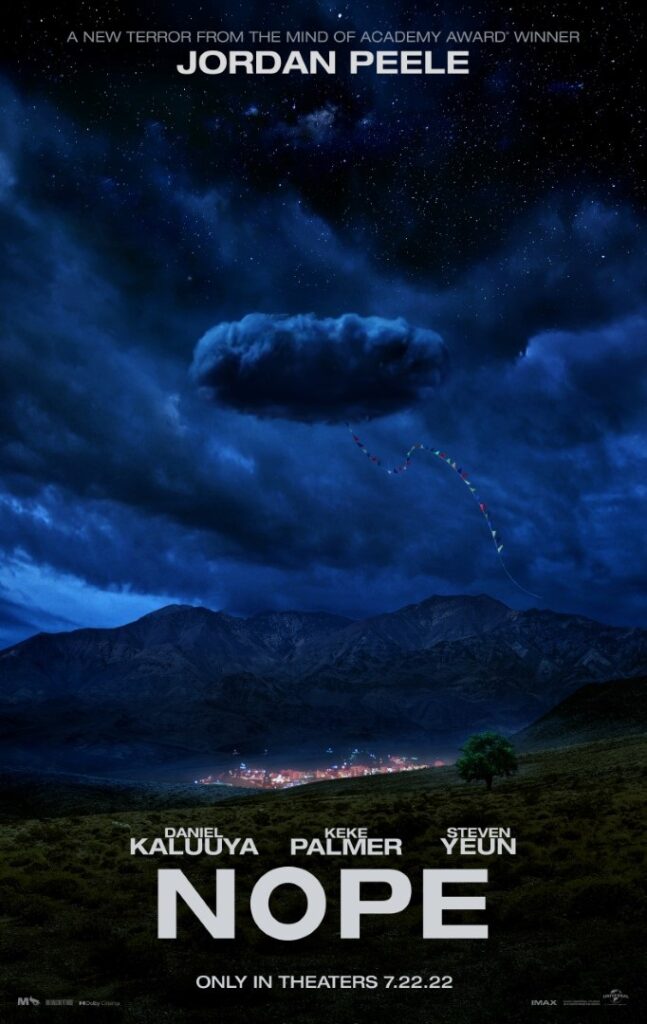 Director: Jordan Peele
Writer(s): Jordan Peele
Stars: Daniel Kaluuya, Keke Palmer, Steven Yeun
Nope is now in theaters. Be sure to follow E-Man’s Movie Reviews on Facebook, Subscribe on YouTube, or follow me on Twitter/IG @EmansReviews for even more movie news and reviews!