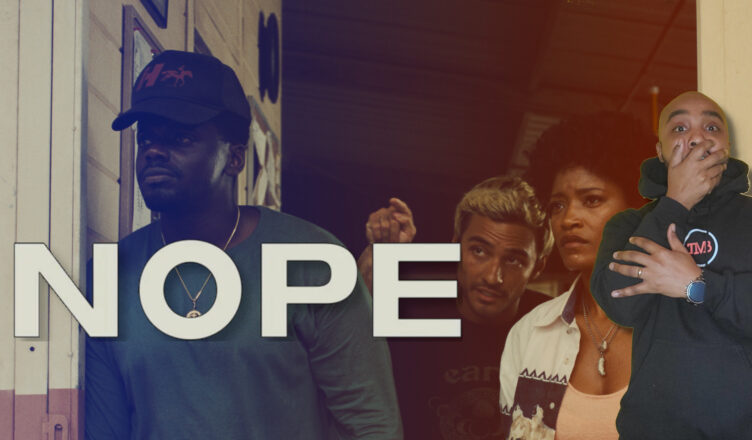 Daniel Kaluuya, KeKe Palmer, Keith David, and more lead a great cast for Jordan Peele’s NOPE. I really enjoyed KeKe Palmer’s performance in this film and felt she highlighted every scene she was in. She had the difficult job of acting opposite Daniel Kaluuya but I loved every moment with her on screen.  The characters are written well enough that each actor was able to pull off a great performance. There are a ton of fun one-liners and references, like everything about SNL, that will keep your ears open.

Nope is a surprisingly vibrant world full of brightness and color. The irony is that this sense of openness and safety provided in the setting is a lie. The film uses a plot that relies on American tropes and folklore to push the story forward. Anyone familiar with Area 51 and the propaganda that often surrounds online searches about it then you’ll easily follow the motives in this movie.  There’s a threat hiding in plain sight in this movie and our leads are trying to survive it. NOPE is a summer monster movie that I didn’t know I wanted but am very glad I found.

The pacing found in NOPE is right on point. Jordan Peele is great at setting up the atmosphere and a false sense of security. We find out there’s a mystery surrounding a few strange occurrences in a secluded area of California early on. It doesn’t take long for you to start asking questions about what’s going on and we get the introduction to the mystery early on. Jordan Peele has improved his use of sound. Very Christopher Nolan-ish with the use of IMAX cameras and sound. The audio becomes a big part of the experience in the 3rd act.

A lot of the story just doesn’t make sense. There are characters who appear in the movie during critical parts of the plot without explanation. These characters are then written out of the scene and we still have no idea why there were there at all. Steven Yeun also feels completely wasted in his casting. It’s great to see him in the movie and he does a great job with his role but he’s not at all necessary for this movie. A huge part of his story is told via flashbacks but even these seem non-essential. An argument can be made that if you cut out his character that there’s no impact on the plot of this movie.

The ending of the movie isn’t fully satisfying and leaves you with lots of questions. We learn what happens to everyone by the end of the film the narrative doesn’t feel satisfying. What just happened? Why did this happen? What the heck was that thing? We get an ending and I’m happy with some of the things in the ending, but the lack of explanation is frustrating. We don’t learn much of anything about the creature and that’s frustrating considering how invested you are in its mystery.

The movie seemed a little long but that could be due to me feeling confused by the plot. Steven Yuen’s character seems completely needless and non-essential. Daniel Kaluuya and KeKe Palmer deliver some great performances as siblings and I love their banter. The overall action in the film is thrilling to watch and had me excited every time we knew the monster was coming.