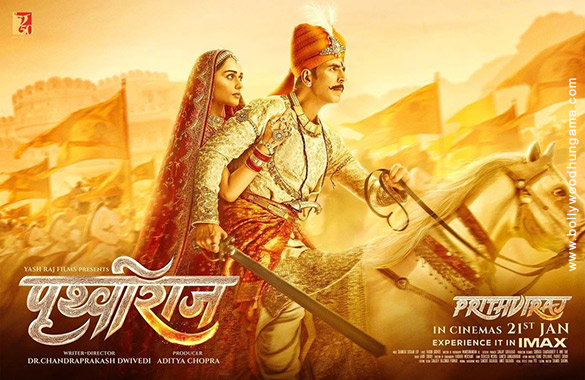 “Chaar Baas Chaubees Gaj, Angul Ashth Pramaan…Taa Upar Sultan Hain, Mat Chuko Chauhan!” This Hindi phrase means, “The Sultan (Muhammad Ghori) is on horseback at a distance of 72 feet and 6 inches from you, Chauhan! Don’t miss this opportunity. Aim precisely, and kill him!” This is what courtier Chand Bardai told the blinded Emperor Prithviraj Chauhan when the tyrant Sultan Muhammad Ghori stepped into the arena to have a duel with him. Samrat Prithviraj Chauhan the daredevil Rajput Emperor of Delhi was an ace archer, and warrior. His legend goes back about 1000 years from now.

It is the year 1192, present-day Ghazni, Afghanistan; which was a part of India back then. The scene opens showing Emperor Prithviraj Chauhan captured, and blinded by Muhammad Ghori. The blind Prithviraj is forced to fight three huge lions at a time by Ghori inside a big arena, and he successfully kills all three. But the fight took the most out of the emperor, and he fainted due to weakness and exhaustion.

The story now moves back a few years to Kannauj which was ruled by Prithviraj Chauhan’s cousin, King Jayachand (Ashutosh Rana). Jayachand’s daughter, Princess Sanyogita (Manushi Chhillar), is in love with Prithviraj Chauhan who rules Ajmer, and who also happens to be her uncle in relation. Note that, this may appear incest but these things were very much common in historic India.

The story shifts back to Ajmer where Muhammad Ghori’s brother Mir Hossain approached Prithviraj. Both brothers Ghori and Hossain had a drift over a beautiful dancer named Chitralekha in Ghori’s kingdom. Chitralekha and Hossain loved each other, and he had escaped from Ghori along with her. Ghori too desired the beautiful Chitralekha, and Hossain feared his wrath.

Prithviraj offered to help Hossain and took him to his kingdom. As Ghori became aware of this, his anger knew no bounds. He decided to attack Prithviraj’s Ajmer if he was reluctant to hand over Hossain, and Chitralekha to him.

This resulted in the First Battle of Tarain where Prithviraj along with Kaka Kanha (Sanjay Dutt), Chand Bardai, and his other soldiers was able to defeat Ghori’s army. Ghori was captured by Prithviraj but after a few days, he was released by the emperor at Chand Bardai’s request. Chand Bardai exercised his astrology powers and advised Prithviraj that this was not the right time to kill Ghori.

The days passed, and Prithviraj was appointed as the ruler of Delhi. This enraged his brother Jayachand as he became jealous of him. Jayachand decided to organize a “Svayamvara” for Sanyogita. Svayamvara was an Indian tradition where the bride-to-be was allowed to select her groom from a group of several eligible men. He also conducted a “Rajasuya Yagya” in order to increase his empire, which was a ceremony where persists offer prayers to the Almighty. He also invited Prithviraj and requested him to offer him half the control of his Delhi Empire. Prithviraj rejected Jayachand’s invitation, and request as well. 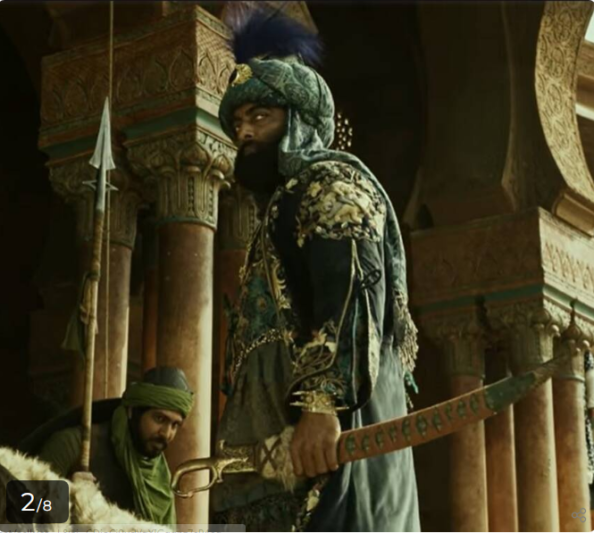 As Prithviraj was not present at the occasion, Jayachand decided to make a statue of him in the doorway of his palace. As per the rituals, if someone rejects the invitation, a statue can fill the position of that person who is not present. The Svayamvara started, and Sanyogita was now required to select her groom by putting a garland on her desired man. But she had her heart for Prithviraj only, and thus she decided to put the garland on his statue which Jayachand had erected at his palace’s doorway. By doing this, Sayogita had chosen Prithviraj as her husband.

This angered Jayachand, and he decided to punish his daughter for her audacity. It was then that Prithviraj arrived at the venue along with Chand Bardai on horseback. He approached, pulled Sanyogita with him on horseback, and galloped away with her. The furious Jayachand decided to attack the fleeing Prithviraj. However, he was stopped from doing so by his court advisors. Prithviraj and Sanyogita got married. A few days later, Jayachand sent his army to attack the forts which were under the control of Prithviraj. Soon, Prithviraj’s Gaudpur Fort was captured by Jayachand’s army.

Prithviraj, Sanyogita, and Chand Bardai were not present at the location during the time of the attack. So, Prithviraj’s most loyal general Kaka Kanha along with his army decided to recapture the Gaudpur fort. They successfully recaptured the fort but Kaka Kanha and many other men of Prithviraj’s army got killed in the battle. Prithviraj was furious and decided to attack Jayachand in return. But he reverted this decision as Kaka Kanha’s last wish was to forgive Jayachand. Later, Prithviraj decided to give an equal position to his wife Sanyogita in his court. But this decision of his was opposed by his court members. However, soon he managed to obtain the approval of his members by educating them about the importance of women, and their equal rights in society.

Jayachand contacted Muhammad Ghori and requested him to capture Prithviraj. Ghori was supposed to hand over Prithviraj to Jayachand in exchange for whatever he desired. So, he once again sent Qutab-ud din Aibak to Delhi to meet Prithviraj. Aibak warned Prithviraj to bow down before Ghori, and accept him as his ruler. If Prithviraj didn’t do so, he should be prepared for another war with Ghori.

Prithviraj accepted the war proposal with Ghori, and the war was declared. Now it was the second battle of Tarain! A violent battle endured between Prithviraj’s army, and Ghori’s army. Ghori seemed to be losing as his army men were getting speedily killed by Prithviraj’s army. 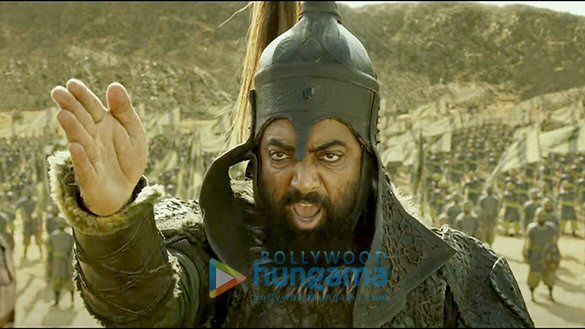 It was then Ghori set his evil plans into action and decided to attack Prithviraj and his army during the night when they would be sleeping. At night when everyone slept, Ghori’s army pounced on Prithviraj’s army and defeated them. They then captured Prithviraj and took him to Ghazi in front of Ghori.

In historic India, when an emperor used to defeat another emperor, the defeated emperor’s women used to become the property of the victorious emperor. As Prithviraj was defeated by Ghori, Ghori claimed Sanyogita as his property. So when Ghori’s army approached Delhi to obtain Sanyogita, she and other Rajput women performed a “Jauhar” which is mass suicide by immolation. This frustrated Ghori, and he now refused to surrender Prithviraj to Jayachand. Jayachand realized that he was the loser here as he not only lost Ajmer to Muhammad Ghori but his daughter Sanyogita as well. 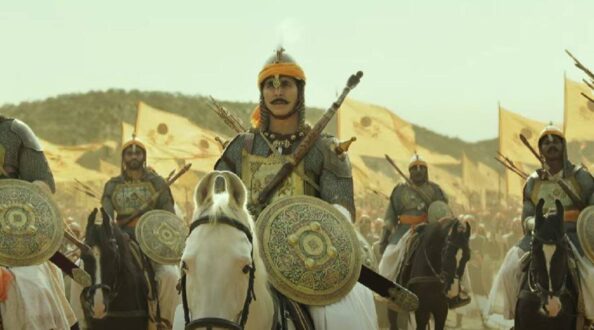 Ghori’s men took over Prithviraj’s Delhi Empire. Ghori ordered his men to remove the captured Prithviraj’s eyes and make him blind. After being blinded, Prithviraj was forcefully made to fight three lions at a time but he defeated and killed all the three in spite of his miserable condition.

After killing the three lions, Prithviraj roared at Ghori that if anyone wanted to attack him, he should first call his name before attacking, and his trusted courtier Chand Bardai should be allowed to help him. After saying this, he fainted out of exhaustion.

The next day, Ghori gave the blind Prithviraj seven chances to save himself along with his army. The task given to Prithviraj was hard. He was to be provided a bow along with seven arrows, and a group of seven of Ghori’s men would be released inside the arena where he was standing. If he can kill just one man out of the seven, then he will be freed.

Prithviraj rejected Ghori’s offer and asked for one chance only, not seven. He requested Ghori that he should be given just one arrow, and no other man but Ghori himself should face him inside the arena.

Ghori accepted the condition. Riding on horseback, he charged toward the blind Prithviraj. As Ghori approached Prithviraj, Chand Bardai recited the epic poetic lines to Prithviraj, which I have mentioned in the beginning of this story. Through these lines, the blind Prithviraj was able to track the exact direction, and distance from which Ghori was approaching.

He aimed and released the arrow from his bow. The arrow shot toward Muhammad Ghori, and hit his neck, killing him instantly. Elated by Ghori’s death, Chand Bardai jumped to hug Prithviraj. However, Ghori’s men shot several arrows at them which killed both of them instantly. Because of the condition given by Prithviraj to Ghori, Ghori’s men had to reluctantly release Prithviraj from their captivity. After being released, the men carried the dead bodies of both Prithviraj and Chand Bardai to perform their funeral.

Prithviraj Chauhan was the last Hindu ruler of Delhi. After his death, the Islamic conquest of India began, and the Muslim rulers took over the country. Following the Muslim rulers, the British came to India and enslaved the Indians. About 1000 years after Prithviraj Chauhan’s death, India finally gained independence in the year 1947 from British rule. The death of this braveheart warrior and the last Hindu Emperor of India was justified through India’s freedom after a thousand years. His legacy will continue to reside in every Indian heart which beats for its motherland.

Stay Tuned for my review Of Samrat Prithviraj: The Lion Of India, Coming Soon!