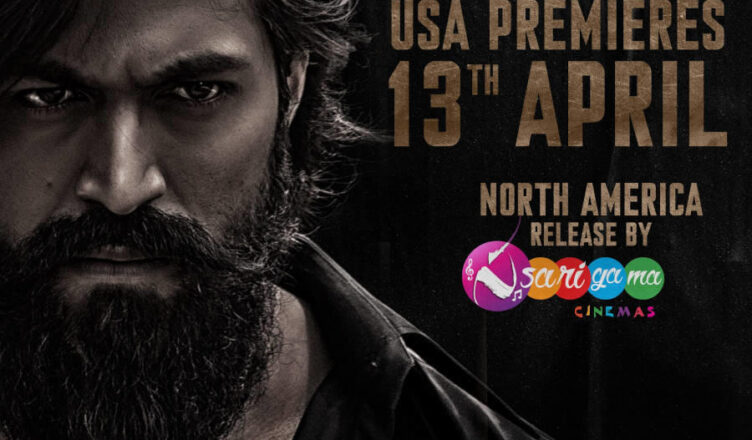 “Stories written in blood cannot be re-written in ink”. Witness the violent rise of India’s biggest gold mafia in K.G.F (Kolar Gold Fields): Chapter 2. As the mafia head rises, he becomes invincible and destroys his competition once and for all. Writer and director Prashanth Neel proceeds with the story of this invincible gold mafia head in K.G.F: Chapter 2, which is a sequel to his 2018 blockbuster film K.G.F: Chapter 1. This fictional story is set in India’s biggest gold mine, the Kolar Gold Fields. Starring Naveen Kumar Gowda a.k.a. Yash as the gold mafia head Rocky, K.G.F: Chapter 2 released in Kannada, Telugu, Tamil, Malayalam and Hindi in theaters all across India on April 14, 2022.

K.G.F: Chapter 1’s story begins showing journalist Anand Ingalagi (Anant Nag) whose book “El Dorado” detailing the events in the Kolar Gold Fields during the period 1951 to 2018 got banned by the Indian government. In El Dorado, Ingalagi had described the harsh incidents of brutality that the slaves at the Indian gold mine Kolar Gold Fields were subjected to at the hands of the gold mafia head named Garuda (Ramachandra Raju) who had occupied the region. This led to the uprising of a professional assassin named Rocky who assassinated him and put an end to the misery of the slaves at the Kolar Gold Fields. After murdering Garuda, Rocky was tagged as the most dreaded criminal in India and a death warrant was issued against him by the Prime Minister of India, Ramika Sen. 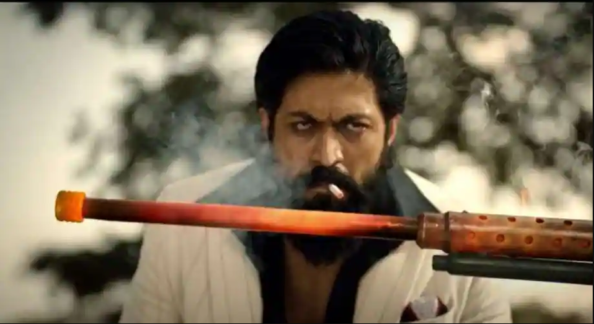 After killing Garuda, Rocky took charge as the kingpin of the Kolar Gold Fields much to the jealousy of his rival as well as supporter Guru Pandian (Achyuth Kumar) who had expected to take over the gold mine. Rocky also kills Virat, who was the younger brother of Garuda as he was the apparent heir to the gold mine.

Now Rocky along with his girlfriend Reena (Srinidhi Shetty) started ruling the Kolar Gold Fields. However, Rocky had spared Garuda’s trusted aide Vanaram (Ayyappa Sharma) and gave him the position of the security in-charge at the Kolar Gold Fields. Vanaram joined Rocky and began to train young security guards for protecting the K.G.F territory.

Meanwhile, Rocky’s aide Guru Pandian was holding high political power in the central government and some central ministers were fed up by Rocky’s K.G.F reign as well as Guru Pandian’s tyrannous reign in the country. The ministers wanted Ramika Sen (Raveena Tandon) to be in power and planned to vote for a “No Confidence” motion against Guru Pandian.

All of a sudden, the news of Garuda’s uncle Adheera (Sanjay Dutt) being alive started doing the rounds. Adheera, who was presumed to be dead, emerged alive and claimed his ownership on the Kolar Gold Fields. He entered the gold mine and killed the guards at the mine’s outpost. His terror spread in the hearts all workers and residents at the Kolar Gold Fields.

Tense moments erupted in the Kolar Gold Fields and Rocky’s girlfriend Reena tried to flee from the area but was captured by John (John Korkken) who was an overseer of the gold mine. Rocky was able to save his girlfriend from John in time. However, all this was just a plan to bring Rocky out of his territory. Rocky realized that Adheera and his men had surrounded the gold mine and it was impossible for anyone to move out of the area. Seeing the lone Rocky, Adheera shot him. However, he did not kill him but spared his life in order to send a message of his arrival at the Kolar Gold Fields.

The central ministers had passed a “No Confidence” motion against Guru Pandian and his government was on the verge of losing majority. Meanwhile, Rocky’s gold smuggler ex-boss Shetty (Dinesh Mangaluru) joined forces with a dreaded gold baron and don from Dubai Inayat Khalil (Balakrishna) against Rocky. The injured Rocky along with his gang visited Dubai to fix a gold deal with Khalil, but he refused him saying that he is already in a gold deal with Shetty. This angered Rocky and he killed all associates of Shetty who dealt with Khalil and captured Shetty’s areas. This forced Khalil to directly deal with Rocky. Khalil ordered truck loads of machine guns from him.

Rocky Vs. Adheera: Gun Action In the Desert

As Rocky’s trucks were on the way to deliver the machine guns to Khalil, Adheera and his henchmen attacked the trucks. They blasted one of the trucks. Rocky and his men armed themselves with the machine guns from their trucks and destroyed Adheera’s henchmen with a heavy firing. Adheera also got shot but Rocky spared him and warned him to stay away from the Kolar Gold Fields.

Ramika Sen won the Indian general elections and became the Prime Minister of India. After gaining power, she ordered the closure of state borders and bestowed the authority to various CBI officials for conducting raids at Rocky’s warehouses all over India. The CBD raid was being headed by Raghavan.

Anand Ingalagi (Ashok Sharma), then just a young man, was caught by Rocky’s henchmen in one of these raids. Rocky spared him and asked him to write down everything he witnessed. The CBI raided a warehouse of Rocky, but Rocky’s henchmen moved the gold to some other location but they left behind a 400 gram gold biscuit by mistake. The CBI took that gold biscuit to a police station. When Rocky came to know about this, he invaded the police station. He brought down the entire police station to bring back the gold biscuit. Ramika Sen and the CBI became aware of this incident. In order to terrorize Rocky and his gang, Sen ordered the cancellation of the Burma delegation with which she was supposed to go to Burma to negotiate with the rebels there. Instead she gave the freedom to the Indian military to kill all the Burma-based rebels, and the Indian military carried out her orders. This was an indirect warning from her to Rocky that if he didn’t set himself on the right track, he would meet the same fate at her hands like the Burma rebels!

Rocky’s enemy Andrews (B.S. Avinash) goes to Adheera’s place and pleads before him to kill Rocky. Adheera assures him that he would murder Rocky only if he did not find a secret way to enter the Kolar Gold Fields. Meanwhile, the mining work at Rocky’s Kolar gold mine was on its high! Rocky, with the help of his workers, shifted his mother’s grave to some other location where his mother would rest safely in peace. Rocky’s henchmen also found his drunkard father who didn’t care for his mother and had abandoned her. As a punishment, Rocky appointed his careless and unaware father as a caretaker of his mother’s grave.

Rocky and Reena got married. After marriage, Rocky turned over a new leaf! He went to the Prime Minister’s Office and handed Ramika Sen the file which contained all information regarding his illegal funds used for money laundering. Sen’s party members requested her not to seize that file from Rocky because they all had a share in those funds. Sen directly warned Rocky that she possessed the ability to snatch away his K.G.F empire. At this, Rocky mocked her and made her aware that in order to do so, she must be way ahead of him. Sen realized that if she had to defeat Rocky, she would be required to work underhand outside her system and government.

Time passed and Andrews got a call from Delhi that Adheera has finally found a secret passage to the Kolar gold mine. Inayat Khalil sent his team to help Adheera as he wanted to take revenge on Rocky. Adheera and his team including Andrews and John barged into the Kolar Gold Fields through the secret passage and attacked Rocky’s gang.

Rocky was with his newly-wedded wife Reena at that time. Reena was announcing her pregnancy to Rocky and just as she did so, she got sniped to death by Adheera! Now, a gang war endured between Rocky’s gang and Adheera’s henchmen. A horrendous fight between Rocky and Adheera also took place. Rocky got badly injured by Adheera but was soon able to overpower him. Meanwhile, Rocky’s gang killed all of Adheera’s henchmen including Andrews. John too got killed by Rocky. After killing John, Rocky pounced on Adheera and choked him to death.

The story proceeds and Ramika Sen was giving her speech at the Indian Parliament. Rocky and his henchmen arrived at the Parliament. Rocky stormed in and it was presumed by all that Rocky would kill Ramika Sen. But in a twist it got revealed that Rocky actually had come to kill Guru Pandian who was the mastermind behind the attacks on the Kolar Gold Fields! Guru Pandian was present at that time in the Parliament. The furious Rocky shot him to death in front of Sen. It was later revealed that Guru Pandian was the one who had shown Adheera the secret passage to the gold mine.

Ramika Sen issued a death warrant against Rocky for having committed heinous crimes. Rocky along with all the other residents evacuated the Kolar Gold Fields. Following this, Rocky left in a ship with his cache of gold. Rocky’s ship was chased by planes of the Indian Air Force. The Indian Air Force ordered Rocky to stop his ship and surrender but he refused to do so. 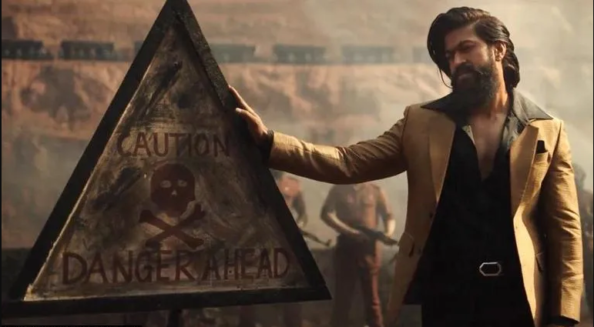 Upon Rocky’s denial to surrender himself, Sen ordered to bomb the Kolar Gold Fields as well as Rocky’s ship. Bombs fell on Rocky’s ship and he drowned in the ocean along with all the gold. Rocky was born in poverty because of which he had promised his mother that he would die as the richest man in the world. As Rocky died, his promise to his mother got fulfilled.

Rocky drowned with all the gold and the Indian Navy, till present day, was unable to locate the gold from the ocean despite multiple attempts. Before he had escaped with his ship, Rocky had built a colony called K.G.F Colony for all his trusted workers to reside.

The story concludes showing the young Anand Ingalagi planning to write a book about Rocky describing him as a “monster” who lived to fulfill a mother’s promise. 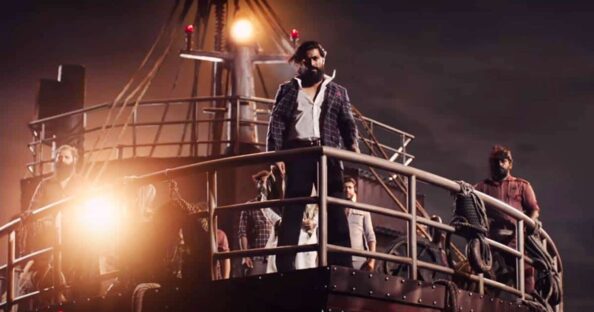 Rocky’s Legacy To Be Continued…

The mid-credits scene from the movie shows a news channel peon finding a final draft of K.G.F: Chapter 3 written by Anand Ingalagi. Will we see Rocky return from the dead in K.G.F: Chapter 3? Who knows?

Stay Tuned for my “Historic Review” of this Epic Period Action-Drama! 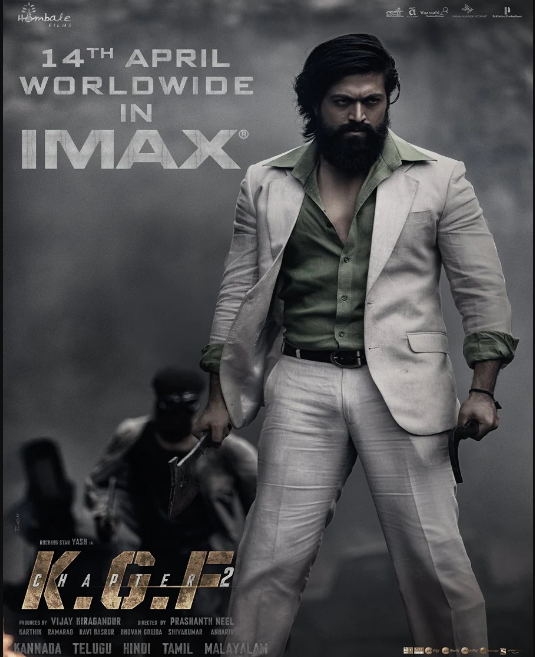