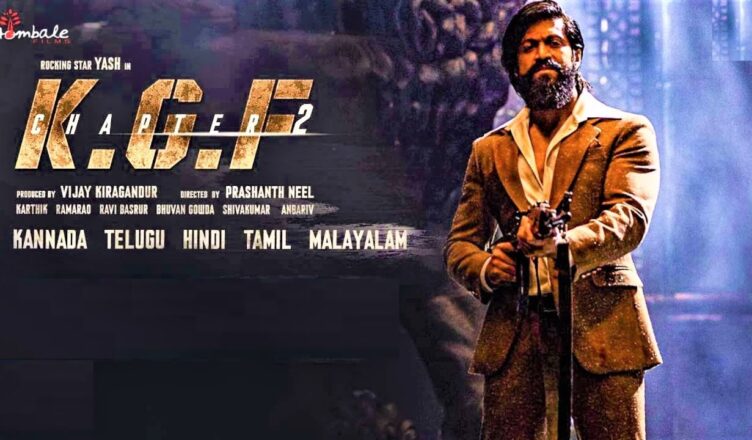 In the blood-soaked Kolar Gold Fields, mafia head Rocky’s name strikes fear in the hearts of his rivals. While his allies look up to him, the Indian government sees him as a threat to law and order. Rocky must battle threats from all sides in order to sustain his reign in the Kolar Gold Fields.

If you are not aware of who Rocky is, let me tell you that he is no ordinary movie character. He is a brand of the K.G.F franchise. And who better can play Rocky other than Sandalwood’s rocking star Yash? Yash’s style, charisma, personality, actions and dialogue delivery; all combine to form the perfect action hero in the form of Rocky.

Standing 6 feet 2 inches tall with a decent muscular physique, this superstar has dwarfed many action heroes of Bollywood and even the South film industry. Sanjay Dutt, the legendary action hero of Bollywood who played the villain Adheera in K.G. F: Chapter 2, was also impressed by Yash’s performance and personality. In a press conference interview when Dutt was asked what best he liked about the movie, he said it’s Yash and his charismatic personality!

Sanjay Dutt, now 62, was battling cancer when this movie was being shot and as the lead villain Adheera, he had to give an intensifying performance which involved several fight scenes with Yash. He was also required to wear a 25 kg heavy leather suit with armors in the role of Adheera. It was none other than Yash who supported him throughout the film and made sure that he was comfortable wearing such a heavy costume while doing intense action scenes throughout the film’s making. Yash was highly concerned about Dutt’s deteriorating health. He even requested Dutt to shoot his scenes in green room sets, so that later on the filmmakers will be able to set the background visuals for his scenes and make them look real. However, Dutt refused Yash and told him that he had seen K.G.F: Chapter 1 and he just cannot disappoint him and the rest of the crew members as his performance in green room sets may spoil the essence of the sequel of a blockbuster movie. He was ready to shoot the intensifying action and fight scenes in the harsh firey rocky desert and burning gold mine sets along with Yash. Dutt did this to match up K.G.F: Chapter 2 at par with K.G.F: Chapter 1 which was a blockbuster. With the efforts of all the crew members especially Yash and Sanjay Dutt, K.G.F: Chapter 2 became a blockbuster as well.

Raveena Tandon, who is the lead female cast in K.G.F: Chapter 2 is a veteran Bollywood actress. I have been seeing her movies since high school. She used to be the star of the 1990s Bollywood cinema and the heartthrob of every young man during that time. Her performance needs no introduction. Srinidhi Shetty as Rocky’s wife Reena gave an intriguing performance. Reena is shown suffering from Stockholm syndrome where she loves Rocky and supports his criminal activities.

I have never ever come across a cinematic masterwork like K.G.F: Chapter 2. The fascinating visuals, backgrounds and the sets amplified the essence of this epic period action-drama. The cinematography by Bhuvan Gowda had a retro touch to match the late 1970s urban and rural landscapes of India. The film was extensively shot in cities like Hyderabad, Bangalore and Mangalore and the landscapes of these cities are beautiful. The shoot also commenced at the Cyanaide Hills of the real Kolar Gold Fields.

K.G.F: Chapter 2 has been shot with utmost precision with the camera capturing even the minutest details like a bullet hitting its target in slow motion. It also involved some brilliant drone camerawork. One amazing visual from the movie is when Rocky’s machine gun-loaded trucks were travelling in a snake like pattern through the mountains before being stranded by Adheera’s gang.

The screenplay of K.G.F: Chapter 2 was even more explosive than the first chapter. Heavy firings, ear-splitting explosions, intense gang wars and hand-to-hand combats; Chapter 2 has it all! Rocky’s epic dialogue in one of the scenes goes, “Violence…Violence…Violence! I don’t like it. But Violence likes me!” This movie is for sure, all about violence! Also, the screenplay involves some awesome dialogues from Rocky. Ones such dialogue in Hindi is “Meri Dosti Layak Koi Yaar Nahi, Mera Dushmani Jhel Sake Aisi Talwaar Nahi!”; which means “There is no man who can stand my friendship; also there is no sword which can withstand my enmity!”

Even if the movie ran through a huge duration of 2 hours and 50 minutes, the editing done by Ujwal Kulkarni is praiseworthy. This epic period action-drama will instill thrill with each and every passing moment as tensions erupt into immense gang wars and one-on-one fights! The sequences were edited so as to match the flow of the film which in turn kept the thrill intact throughout its entire runtime. You will be amazed to learn about the editing potential of Kulkarni who happens to be only 19 years old and has created history with his film editing skills at such a young age!

You may have watched many action screenplays till date, but I am sure none of them would compare to this one! A scene goes where Rocky’s trucks were stranded by Adheera and his gang. The trucks were all lined up above the mountain. Adheera and his gang were preparing to fire at the trucks from below the mountain. Rocky stood facing them with his hands pretending to hold a machine gun. He signaled his own gang members who were inside the trucks by pretending to fire at Adheera’s gang. It was then a hell lot of men emerged out the trucks and intensely fired their machine guns at Adheera and his gang. This is an epic scene from the movie which you probably wouldn’t want to miss out!

Rocky Vs. Adheera: Gun Action In the Desert

Though the original tracks of K.G.F: Chapter 2 were sung in Kannada, the Hindi versions of all the tracks have been re-composed by Ravi Basrur and Kinnal Raj. Just listen to the rocking tracks like “Toofan” and “Sulthan” in Hindi as they will surely make you feel the power of the rockstar Rocky!

Portrays The Reality Of Indian Sons

K.G.F: Chapter 2 is no exaggeration. It portrays the real-life dedication that we Indian sons have for our mothers. Rocky lived to fulfill the promise he had made to his mother. As he was born in poverty, he promised his mother that he would die as the richest man in this world. At present, Jeff Bezos is the richest man in this world. However, as per this fictional story, during the late 1970s it was Rocky who was the richest man! After all, he owned an entire gold mine and his mafia empire spread all across India after he defeated his rivals. He was probably even richer than the Arabs.

The dedication of Rocky towards his mother can be seen from the movie where he decided to shift his mother’s grave to some safe location where she could rest in peace and Adheera’s sudden attacks won’t disturb her peaceful rest. He even punished his drunkard father who had wronged his mother and had abandoned her.

Rocky’s promise to his mother reminds me of my own promise that I made to my mother during childhood, where I promised never to drink or smoke when I grow up. Till date, I haven’t touched a cigarette or a beer or a wine bottle. I have never been to bars or pubs. People find it hard to imagine a man above 40 who has never consumed alcohol or smoked in his entire life. We Indian sons are for sure highly dedicated to the promises we make to our parents, especially our mothers, and K.G.F: Chapter 2 does portray this reality!

Signifies The Power Of Goddess Kaali

“Maa Kaali” or Goddess Kaali symbolizes power in Hinduism. Being a Bengali Hindu, I worship goddesses like Durga and Kaali. Goddess Kaali indicates the impermanence of all things, which is why she wears a garland of skulls. Yet she is also the ultimate transforming power, which can take us from death to immortality.

Rocky sets on his pursuit for power to become a living legend with the blessings of Goddess Kaali. He even beheaded Garuda in Chapter 1 in front of the goddess. Goddess Kaali and scenes of her dedicated worship in the movie not only portrays Hinduism but also the power of Hinduism.

If you are wondering, how can a person by the name “Rocky” be a Hindu? Then I would like to tell you that his real name in the movie was Raja Krishnappa Bairya. Rocky was just his pet name.

K.G.F: Chapter 2 is probably the first and will be the only movie in my review history which has nothing “bad” associated with it. It is a complete masterpiece! Just watch it and you will get to know why. If you are an action or thriller lover, this is just the movie you may crave for!

You might think that I am exaggerating things because I am an Indian and this is an Indian movie. But no! I am from North India and this is a South Indian movie. We are poles apart! K.G.F: Chapter 2 does deserve to be on top of the hit list of all movies owing to its amazing storyline and the classy direction of Prashanth Neel.

Prashanth Neel’s filmmaking style has been praised by all including Yash himself. In an interview he revealed Neel’s technicality and dedication to his work which sets him apart from all his competitor directors. Yash further said that Neel, as a director, has the ability to be at par with Hollywood directors as his movies have an essence of Hollywood movies in them. The sets, locations and backgrounds of K.G.F: Chapter 2 were magical and formulating such complicated gold field sets with thousands of workers required huge investments from the producers. No doubt, the movie’s gross budget sums up to INR 100 crores!

If you think that Rocky in the K.G.F franchise was a criminal, then you are right because he surely was! But he was also the “Robin Hood” for the workers and residents at the Kolar Gold Fields. He was their savior as well as protector. He saved them from the dreadful mafia leader Garuda and protected them from Adheera’s wrath. He supported them at the time of distress financially as well as emotionally. He was the “hero” that every poor Indian citizen would deserve.

With this, I can conclude that the downfall of Bollywood has begun. You read that right! The cosmic emergence of the South Indian film industry with heavy-hitting blockbuster movies like RRR and K.G.F has impacted the TRP of Bollywood movies to a great extent. K.G.F: Chapter 2 has not just won the hearts of the Indian audience but the global audience as well across North America and Australia. Bollywood needs to change its filmmaking style so that it can match up to some extent with the masterpieces created by the South film industry. If it doesn’t do so soon enough, then the day won’t be far when Indian movies will comprise South Indian movies only. Bollywood will then be a thing of the past. 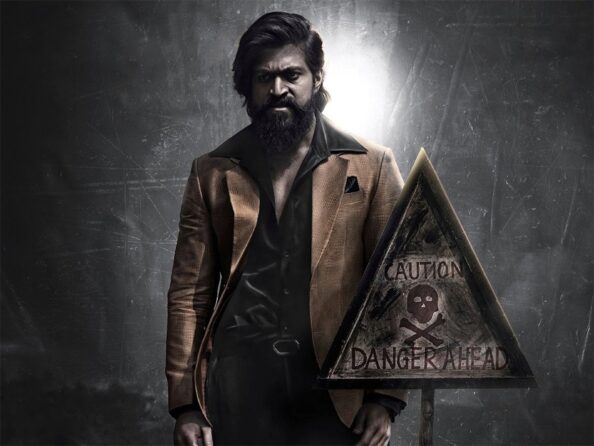 I hope after reading my long review, you wouldn’t want me to remind you to watch K.G.F: Chapter 2. Rather I would say, don’t miss this movie because if you do, you would probably be missing out the biggest blockbuster in the history of Indian cinema! 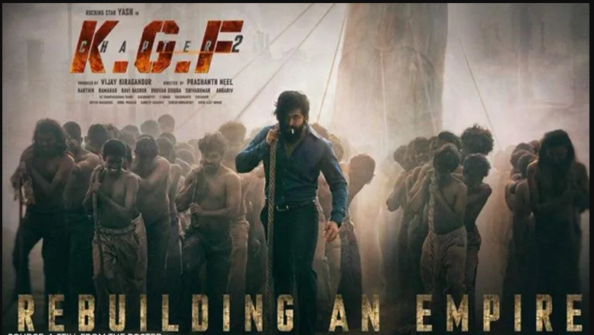