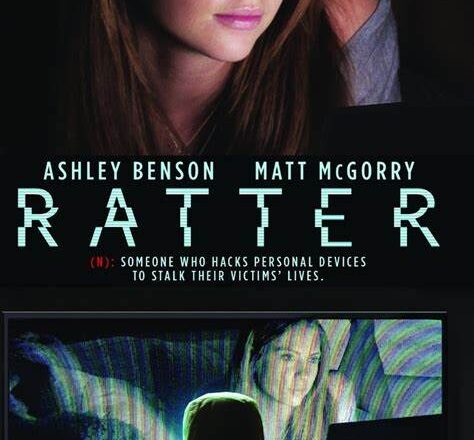 Emma, a graduate student living alone in NYC, is being watched constantly by a stalker who hacks into the technology that surrounds her – laptop, cell phone, and other web connected devices. This demented obsession continues to grow as the hacker records Emma’s most intimate moments. When the thrill of watching isn’t enough, the situation escalates to a dangerous and terrifying level.

It takes a while for the sinister to splatter in the disturbing found footage horror thriller “Ratter”. Then it does.

Ashley Benson (HBO Max’s “Pretty Little Liars”) is Emma, a grad school coed coming off of a rough romantic break-up as she comes to the big city. We watch as Emma gradually goes from wide-eyed Middle American girl to terrorized prey, paralyzed with fear at every turn in a life scarily spinning out of her control.

Benson holds her own, as well as our emotional investment, as her besieged character battles an unseen sicko who sees virtually her every move, virtually, through a series of tech toys Emma, as does practically every one of us, covets as a constant companion through day and night.

As a parent, hell, as a human, be forewarned that the grimly barbaric closing moments of “Ratter” are harder than hell to watch. They will stay with you.

And, yet, there is this other puzzling matter likely to linger…

So the devices are left behind?

Ashley Benson holds her own, as well as our emotional investment, as her besieged character battles an unseen sicko who sees virtually her every move……virtually.