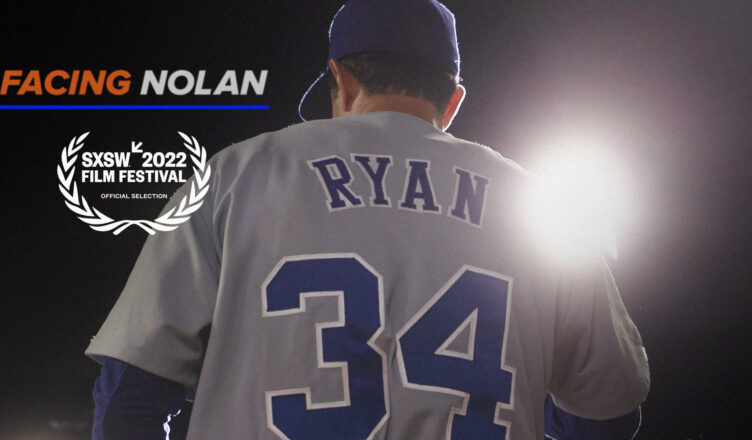 Pitcher Nolan Ryan is now 74 years old. His family members, especially sons Reese and Reid, collaborated on Facing Nolan  at SXSW directed by Bradley Jackson that showcases the achievements of the pitcher of whom Rod Carew said, “There will never be another like Nolan Ryan.” Pete Rose added, “Nolan was a lion.”

Drafted at age 18 right out of high school, the pitcher with the 100 mph-plus pitch is lauded as “the most dominating pitcher that the game has ever seen.” As Cal Ripken, Jr., said, “There will never be anything like him.”

The man who pitched for a record 27 years, notching 320 victories, 5,714 strikeouts, and 7 no-hitters was also a devoted family man. He married his high school sweetheart, and the pair had three children, two boys, and a girl. The former President of the United States (and Texas “Rangers” owner)., George W. Bush, is interviewed about Nolan, saying, “What really matters, in the long run, is a good set of values.”

During his induction into the Baseball Hall of Fame in Cooperstown in 1999, Nolan acknowledged his wife Ruth’s contribution to his amazing success The grandchildren attest that Ruth was the most competitive parent. Shewho was also a high school athlete in Alvin, Texas, and the 1965 state doubles tennis champion. Ruth is credited with keeping Nolan pitching at a time when he was wavering in his resolve to continue. (He said he wanted to be a veterinarian in his teen-aged years.) When son Reid was hit by a car in Villa Park, California, and lost one kidney and his spleen, it was Ruth who kept the family going, focusing on their sick son so that Nolan could focus on his amazing career.

Sandy Koufax was one of Nolan’s early idols.  Nolan was able to break all of Koufax’s pitching records within 10 years. The youngest of six children of Depression-era parents, Nolan stood 6’ 1” and weighed 142 pounds, but he could throw a baseball over 100 miles an hour and, as he said, “I guess I was born to be a pitcher.” At his 1999 induction into baseball’s Hall of Fame, Ryan said, “I took a lot of pride that I was still able to compete at that level at that age” His 27-year record-breaking career included the play in four decades.

When he left to play ball for a Texas team only 35 miles from his hometown of Alva, after disputes with owner John McMullin in 1988, fans were incensed. As it tells us in the documentary, “In Houston, they still cuss him out.” However, the manager of the Texas team he joined, said, “It was like Elvis had come aboard.”

Nolan Ryan was born in 1947. He was shown signing baseballs at a Round Rock event. Considerably heavier than in his playing days, he is surrounded by a loving family. The documentary is a baseball lover’s Must-See and is well done by Director Bradley Jackson, who has assembled a Who’s Who of Nolan Ryan’s friends and competitors to comment on his truly extraordinary life and career.